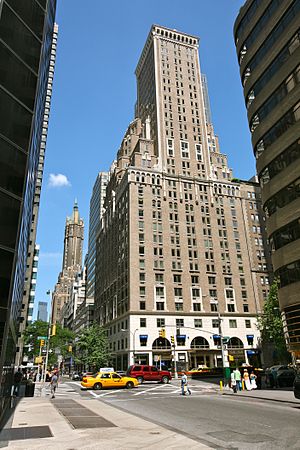 Trump Park Avenue is a former skyscraper hotel converted to a residential condominium by Real estate developer Donald Trump. It is located on the southern border of Lenox Hill at 502 Park Avenue Manhattan, New York City. It contains 120 luxury condominium apartments and 8 penthouses. The building is 32 stories high. It was built in 1929 and it was designed by Goldner and Goldner. The building has had many uses over the years. It was originally the Viceroy Hotel but was renamed as the Cromwell Arms and as the Hotel Delmonico. In 1929, it was purchased by New York investor Benjamin Winter, Sr.[1]

The building was purchased by Donald Trump from Sarah Korein for $115 million in 2002. Trump converted it into condominium apartments in 2004. Costas Kondylis was the architect of the project. Services and amenities provided to residents include a doorman, personal maids (which includes laundry and household cleaning) and a fitness center. Trump Park Avenue is located on Park Avenue and 59th Street in the Upper East Side district of Manhattan which is one of the most expensive urban neighborhoods in the United States.[citation needed]