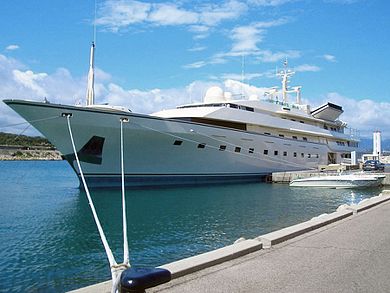 It was originally built as Nabila for Saudi billionaire Adnan Khashoggi (named for his daughter). During Khashoggi's ownership, it was one of the largest yachts in the world but is now ranked down at 65th and continues to fall down the rankings, due to the trend of larger and larger personal yachts being built. In fact the largest yacht as of 2016 is 180 metres so Kingdom 5KR falls short of even half that size.

During its days as Nabila, it was featured in the James Bond movie Never Say Never Again, in which it was seen as Flying Saucer (translated from Italian Disco Volante in the source novel, Thunderball), the villain's superyacht mobile HQ. It was also the inspiration for a track, "Khashoggi's Ship", on the 1989 album by rock band Queen, The Miracle.

After Khashoggi ran into financial problems, he sold the yacht in 1988 to the Sultan of Brunei, who in turn sold it to Donald Trump for $29 million. After a refit, Trump renamed it Trump Princess.

Trump sold it when he ran into financial problems in 1991[3] to Prince Al-Waleed bin Talal for $20 million.[4]

The yacht's latest name stems from the Prince's investment company, Kingdom Holding Company, his lucky number (5), and his children's initials ('K' and 'R').[5]

When it was delivered it had five decks, a disco, a cinema with seats for 12 and 2 double beds, 11 opulent suites, a helipad on top (its funnels are sloped outward to avoid interference with the helicopters), a pool with a water jet on top in front of the heliport, 2 Riva tenders, a crew of 48, a top speed of 20 knots, and cruising speed of 17.5 knots.[6] Propulsion was supplied by two 3,000 horsepower (2,200 kW) Nohab Polar engines.[2]