The building is located two blocks from the Manhattan entrance of the Holland Tunnel in SoHo, Manhattan, New York City, at 246 Spring Street, between Varick Street and Sixth Avenue. It is located a few blocks west of the SoHo-Cast Iron Historic District. This is a region zoned for manufacturing, which precludes permanent residences.[3] The condo-hotel design was approved after negotiations with New York City Mayor Michael Bloomberg.[3] As a hotel condominium, 391 dwelling units within the building will be privately owned, but no unit may "be occupied by the same person for more than 29 days in any 36-day period, or for more than 120 days a year."[4] When not occupied by the owner, an empty unit may be rented out as a hotel suite.[3] The building will feature a spa, a high-end restaurant and over 12,000 square feet (1,100 m2) of conference and banquet facilities.

The project is a collaboration between Trump, the Bayrock Group and Tamir Sapir.[3] The building is being overseen by Donald Trump, his children Donald Trump, Jr., and Ivanka Trump, and Sean Yazbeck. The Trumps have not invested their own capital in the project.[3] Design architects for the building are Handel Architects, based in New York. The interior designer is David Rockwell of the Rockwell Group.

The developers claim that the 386,000-square-foot (3.59 ha) condo-hotel was designed to contribute to the neighborhood as well as the skyline. On the other hand, many complain that it "sticks out like a sore thumb" and is entirely inappropriate for the area. Along with the private rooms, it is expected there will be public areas, including the Quattro Gastronomia Italiana restaurant, and a public garden, two story guest lobby, Library and Bazaar, the hotel's cocktail lounge.[5] There will also be a business center with conference and meeting rooms.

The hotel will feature an outdoor, seasonal pool deck with a bocci court. Located on the same level will be the 11,000 square feet (1,000 m2) The Spa at Trump, fitness facilities and the seasonal bar Bar d’Eau.

The external walls of each room will be made completely of double sided mirrors, giving its tenants a panoramic view of the Statue of Liberty, Hudson River, and the Manhattan skyline. The rooms are the only New York City hotel furnished by Fendi Casa.[5]

The 46th floor will be home to "SoHi", an event space offering New York skyline views.[5] 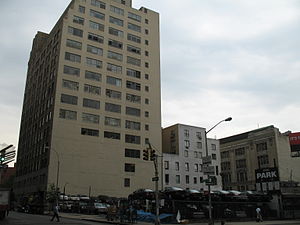 The plans for the building were unveiled on Donald Trump's show, The Apprentice,[6] and chosen by the Season 5 winner, Sean Yazbeck, over the Trump International Hotel and Tower project on the June 5, 2006, Apprentice season finale.

Excavation and foundation work for the new building began in November 2006,[7] though full city approval for the project was not granted until May 2007.[8] The plan faced strong opposition from the Greenwich Village Society for Historic Preservation. The preservation group felt that the building was too large and not in keeping with the community's character. They pushed for rezonings of the Far West Village and Hudson Square that would prevent out-of-scale projects such as this.[9]

Construction was temporarily halted in December 2006 after workers discovered human bones.[10] Archaeologists determined that the remains were from 19th-century burial vaults built under the former Spring Street Presbyterian Church,[11] which stood at the site until 1966.[12]

On January 14, 2008, formwork collapsed during a concrete pour, killing one worker. Yuriy Vanchytskyy, an immigrant from Ukraine employed by DiFama Concrete, fell from the 42nd floor and was decapitated; three other workers were injured. The Department of Buildings halted work on the project and the contractor, Bovis Lend Lease, was issued four violations. Investigators subsequently determined that the wooden formwork did not meet industry standards.[13][14][15] The stop-work order, which only applied to the building's upper floors, was later lifted on August 22.[16]

The building's financing was troubled: Bank of America dumped the mezzanine loan for far less than its $75 million face value and the lenders who have $350 million in loans had to restructure debt with the developer.[3]

On November 2, 2011, a lawsuit filed by buyers of ten condos in Trump Soho, including French soccer star Olivier Dacourt, was settled with plaintiffs recovering 90% of their deposits. The plaintiffs had claimed that they were tricked into buying the condos by "deceptive" sales figures of the developers and that the number of apartments sold at Trump Soho had been "fraudulently misrepresented." The New York Post described plaintiffs' 90% recovery as "staggering."[17]

Before the settlement, The Wall Street Journal reported that the owners of Trump SoHo were offering buyers partial refunds on their deposits if they agreed not to participate in the lawsuit.[18]