From Infogalactic: the planetary knowledge core
Jump to: navigation, search
For other buildings of the same name, see Trump Tower.

Trump Tower is a 68-story mixed-use skyscraper located at 725 Fifth Avenue between East 56th Street and East 57th Street in Midtown Manhattan, New York City. Developed by Donald Trump and the Equitable Life Assurance Company (renamed the AXA Equitable Life Insurance Company in 2004), it is owned by Donald Trump, and was designed by Der Scutt of Swanke Hayden Connell. The ground floor stores in the tower were opened for business on November 30, 1983. The grand opening of the Atrium and stores was held on February 14, 1983, with the apartments and offices following shortly thereafter. HRH Construction was the contractor on the building and the Construction Executive was Barbara Res.[1]

Trump Tower was constructed on the former site of the Bonwit Teller flagship store, an architecturally renowned building demolished by Trump in 1980.[2] Trump had promised that valuable Art Deco exterior limestone bas-relief sculptures of semi-nude goddesses, as well as the massive ornate 15' by 25' grille above the store's entrance, would be donated to the Metropolitan Museum of Art, but jackhammered the sculptures instead, citing expense and a possible 10-day construction delay due to the difficulty of removing them.[2][3] The building's decorative grille, supposedly transported to a New Jersey warehouse, was never recovered.[3] Architect Der Scutt was outraged by the destruction, having initially hoped to incorporate the goddess sculptures into the new building's lobby design; Trump had rejected the plan, preferring something "more contemporary".[3] 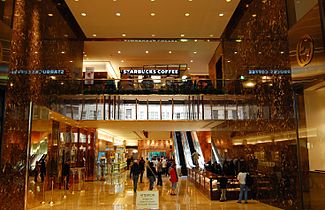 The atrium of the building

Trump Tower is the 57th tallest building in New York City. The tower is a reinforced concrete, shear-wall core structure and was the tallest structure of this type in New York City when completed. A concrete hat-truss at the top of the building ties exterior columns with the concrete core. This increases the effective dimensions of the core to that of the building in order to resist the overturning of lateral forces (wind, minor earthquakes, and impacts perpendicular to the building’s height). A similar structure was used for Trump World Tower.

Ordinarily a building of that height could not have been built on the small site. By mixing uses (retail, office, and residential), constructing a through-block arcade (connecting to the IBM building to the east), and using the air rights from Tiffany’s flagship store next door, and including the atrium (designed as a “public space” under the city codes at the time), Trump was able to assemble a bonus package that enabled a taller tower.

The building’s public spaces are clad in Breccia Pernice, a pink white-veined marble. Mirrors and brass are used throughout. This includes the office lobby, off Fifth Avenue, and the five-level atrium which has a waterfall, shops, cafés, and a pedestrian bridge that crosses over the waterfall’s pool. The atrium is crowned with a skylight. In 2006, Forbes Magazine valued the tower at $318 million. Trump Tower was the setting of the NBC television show The Apprentice including the famous boardroom where at least one person was fired at the end of each episode (the boardroom is actually a television studio set inside Trump Tower).

Trump testified in 1990 he was unaware that 200 undocumented Polish immigrants, some of whom lived at the site during a transit strike and worked round-the-clock shifts (for which they were allegedly paid $4 and $5 per hour off-the-book wages, if at all), were involved in the destruction of the former Bonwit Teller building and Trump Tower project.[5] Trump said that he rarely visited the demolition site[5] and never noticed the laborers, who were known as the "Polish Brigade" and who were visually distinct for their lack of hard hats.[6] A labor consultant and FBI informant, separately convicted on tax evasion charges, testified that Trump was aware of the illegal workers' status.[5] In testimony, Trump admitted that he and an executive used the pseudonym "John Baron" in some of his business dealings,[5] although Trump claimed that he did not do so until years after Trump Tower was constructed.[6] A labor lawyer testified that he was threatened over the phone with a $100 million lawsuit by someone using that name from the Trump Organization.[6] ("Lots of people use pen names", Trump quipped to a reporter. "Ernest Hemingway used one."[6]) Filed in 1983, the class-action lawsuit over unpaid labor union pension and medical obligations went through several appeals and non-jury trials, and was at one point compared by a presiding judge to Jarndyce and Jarndyce, the seemingly unending case which forms the backbone of Charles Dickens' Bleak House.[7] The lawsuit was ultimately settled in 1999, with its records sealed.[6]

In the lobby of the building, there is a Trump Store. The area where the store is lies at the heart of a public area usage dispute. The area was once home to a public bench. The city issued a notice of violation in July 2015 and wants the bench back in place. However the Trump Organization says that the violation is without merit.[8]

Present and past tenants 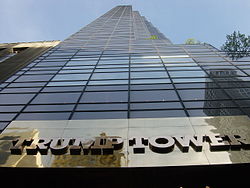 Trump Tower seen from the entrance 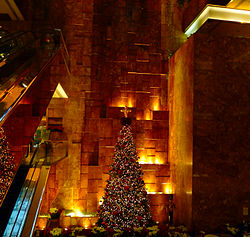 Christmas tree in the lobby, December 2014