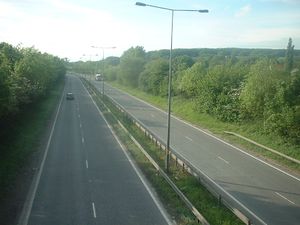 A trunk road, trunk highway, or strategic road is a major road, usually connecting two or more cities, ports, airports and other places, which is the recommended route for long-distance and freight traffic. Many trunk roads have segregated lanes in a dual carriageway, or are of motorway standard.[1]

In the United Kingdom, trunk roads were first defined for Great Britain in the Trunk Roads Act 1936. Thirty major roads were classed as trunk roads and the minister of transport took direct control of them and the bridges across them. This development did not extend to Northern Ireland, which has always had a separate system of highway and road traffic law.

Most interurban trunk roads are "primary routes", the category of roads recommended for long distance and freight transport. Not all primary routes are trunk roads, the difference being that maintenance of trunk roads is paid for by national government bodies rather than the local councils in whose area they lie. Primary routes are identified by their direction signs, which feature white text on a green background with route numbers in yellow. Trunk roads, like other "A" roads, can be either single- or dual-carriageway.

Historically, trunk roads were listed on maps with a "T" in brackets after their number, to distinguish them from non-trunk parts of the same road, however this suffix is no longer included on current Ordinance Survey maps, which simply distinguish between primary and non-primary "A" roads. A trunk road which has been upgraded to motorway standards may retain its original "A" number, but with an "M" in brackets to denote that motorway regulations apply on it. Long distance examples of this are the A1(M) in England, and the A74(M) in Scotland.[1]

It is possible for roads to be "de-trunked" – for example, when superseded by a motorway following a similar route – in which case they normally become ordinary "A" roads. When a road is de-trunked signposts are often replaced, and sometimes route numbers are changed, making the original itinerary of the road harder to follow.

In England, the government has de-trunked much of the trunk road network since the late 1990s, transferring responsibility to local councils to allow the Highways Agency to concentrate on a selection of core trunk routes, mostly dual carriageways and motorways.

Although a number of old road signs using these route designations may still be encountered, Ireland has adopted a newer classification scheme of national primary and national secondary routes ("N" roads), regional roads ("R" roads), and local roads ("L"-prefixed roads). Local road numbers were previously not signposted, although they are now indicated on signs in many areas of the country.

Though the term "trunk road" is not commonly used in American English, the U.S. highway and interstate highway systems can be considered American trunk highways. However, individual states are responsible for actual highway construction and maintenance, even though the federal government helps fund these activities as long as the states enact certain laws and enforce them. (Such laws have included the raising of the minimum drinking age and the lowering of speed limits). Each state maintains all of its roads and tries to integrate them into a system appropriate for that state. Notably, the states of Michigan, Minnesota, and Wisconsin designate their highways as "state trunklines" and "state trunk highways," respectively. In many states, additional highways beyond those that are part of the U.S. highway and interstate highway systems may also serve as trunk highways; these are often numbered and posted as state highways or state routes. Not all state highways and state routes, however, can be expected to serve this purpose or be constructed to these standards; many in rural areas are simple two-lane roads.[3]

China has begun development of the National Trunk Highway System (NTHS), which will create many east-west and north-south highways, plus seven radials heading out of the capital, Beijing. 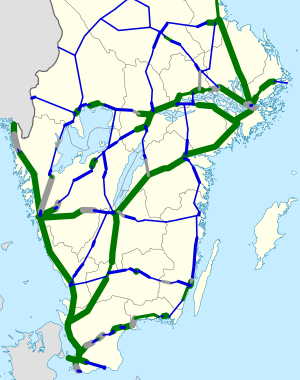 The national trunk road network in southern Sweden (in northern Sweden, only the European routes are trunk roads)

The most important roads in Sweden are labelled "national trunk road". In 1992, the parliament decided upon which roads were to become national trunk roads. They are considered recommended main roads for long-distance traffic.

National trunk roads are planned nationally, as opposed to other roads, which are planned locally. They also have a special, slightly larger budget. However, they are not signed in any special way. Therefore, there is no difference in signage, numbering, road standard or map marking from other national roads. Some national roads are only considered trunk for part of their length. National Road 73 and National Road 75 are both built to motorway standard and have high traffic but are not considered trunk. European routes are always trunk in Sweden, and are more visible with special numbering.