From Infogalactic: the planetary knowledge core
Jump to: navigation, search
This article is about the use of the word in rugby football terminology. For the method of scoring in American and Canadian football, see Conversion (gridiron football). For other uses, see Try (disambiguation). 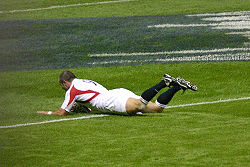 Shaun Perry scoring a try for England against the All Blacks

The term try comes from try at goal, signifying that originally, grounding the ball only gave the opportunity to try to score with a kick at goal.[1]

A try is analogous to a touchdown in American and Canadian football, with the major difference being that a try requires the ball be simultaneously touching the ground in the in-goal area and an attacking player who is in the field of play or in-goal (the official name of the extra point in American football according to NFL rules is the try). In the laws of both codes of rugby, the term touch down formally refers only to grounding the ball by the defensive team in their in-goal. Although occasionally people refer to a try as a 'touchdown', the correct usage for the action is 'grounding the ball'.

Aspects common to both union and league

There are differences in the fine detail of the laws and their interpretation between the two rugby codes. These are the common aspects, while the differences are treated below. 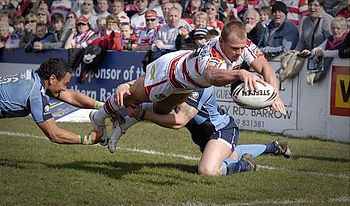 In rugby union, a try is worth five points, in rugby league, four. Although a try is worth less in rugby league, it is more often the main method of scoring due to the smaller value of a goal kick and surety of possession. In rugby union, however, there is heavier reliance placed on goals to accumulate points at elite levels due to the significant value of goals and the defending team's skills.

In rugby union, the value of a try has varied over time, from none to five points. In rugby league, the original value was three, this was increased to four in 1983.

The Welsh Rugby Union is planning to trial a change in the scoring value in the 2015–16 Welsh Premier Division (the level below Pro12). Under the trial plan, which must still be approved by World Rugby, a try would be worth six points instead of five, with penalty tries worth eight points with no conversion attempt taken. In addition, penalties and drop goals would be reduced from three points to two.[2]

In rugby league, an 8-point try is awarded if the defending team commits an act of foul play as the ball is being grounded. The try is awarded, and is followed by a conversion attempt, in-line from where the try was scored, and then a penalty kick from in front of the posts. In rugby union, foul play after a try being scored results in a penalty being awarded on the half way mark, in lieu of a kick off. 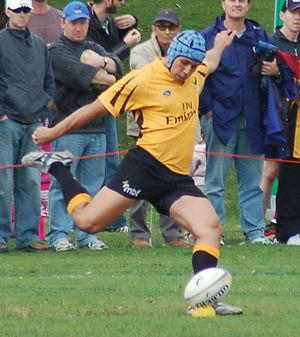 Scott Daruda kicking a conversion for the Western Force

In both codes when a try is scored, the scoring team gets to attempt a conversion, which is a kick at goal to convert the try from one set of points into another larger set of points. The kick is taken at any point on the field of play in line with the point that the ball was grounded for the try, and parallel to the touch-lines. If successful, additional points are scored. For the conversion to be successful the ball must pass over the crossbar and between the uprights. In both codes, the conversion may be attempted as either a place kick (from the ground) or a drop kick. Most players will nevertheless opt for a place kick, this being generally regarded as the easier skill. Note, however, that in both rugby sevens (usually, but not always, played under union rules) and rugby league nines, conversions may only take place as drop kicks. In rugby league, the game clock continues during preparation and execution of a conversion, with the institution of a 25-second shot clock at certain tournaments from the moment the try is awarded by the referee, within which time the conversion kick must be taken, hence a team may decline a conversion attempt if recommencing play as quickly as possible is advantageous to them. 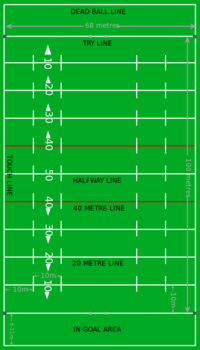 The in-goal area is the rectangular area from the goal line (try line) to the dead ball line. The image shows the markings of a rugby league field.

In early forms of rugby football the point of the game was to score goals. A try [at goal] was awarded for a grounding the ball in the opponents in-goal area. The try had zero value itself, but allowed the attacking team to try a kick at goal without interference from the other team. This kick, if successful, converts a try into a goal.

Modern rugby and all derived forms now favour the try over a goal and thus the try has a definite value, that has increased over time and has for many years surpassed the number of points awarded for a goal. In rugby league and rugby union, a conversion attempt is still given, but is simply seen as adding extra 'bonus' points. These points however can mean the difference between winning or losing a match, so thought is given to fielding players with good goal-kicking skill.