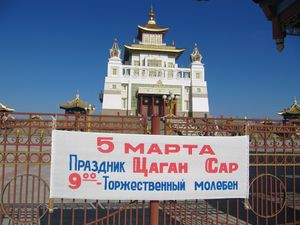 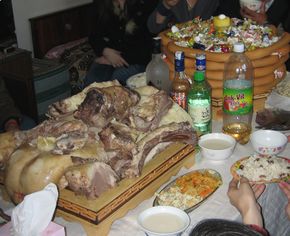 The Mongolian Lunar New Year, commonly known as Tsagaan Sar (Mongolian: Цагаан сар / ᠴᠠᠭᠠᠨ ᠰᠠᠷᠠ; Buryat: Сагаан һара; Oirat: Цаһан сар or literally White Moon), is the first day of the year according to the Mongolian lunar calendar. The festival of the lunar New Year is celebrated by the Mongols.

The White Moon festival is celebrated one month after the first new moon following the winter solstice. Tsagaan Sar is one of the most important Mongolian holidays.[1]

Around the New Year families burn candles at the altar symbolizing Buddhist enlightenment. Also people greet each other with holiday-specific greetings such as Амар байна уу? (Amar baina uu?), meaning "Are you living peacefully?"[2] Mongols also visit friends and family on this day and exchange gifts. A typical Mongol family will meet in the home dwelling of the eldest in the family.[3] Many people will be dressed in full garment of national Mongol costumes. When greeting their elders during the White Moon festival, Mongols perform the zolgokh greeting, grasping them by their elbows to show support for them. The eldest receives greetings from each member of the family except for his/her spouse.[3] During the greeting ceremony, family members hold long, typically blue, silk cloths called a khadag.[1] After the ceremony, the extended family eats sheep's tail, mutton, rice with curds, dairy products, and buuz. It is also typical to drink airag and exchange gifts.

The day before Tsagaan Sar is called Bituun, the name of the lunar phase of a new or dark moon. The lunar phases are Bituun (dark moon), Shined (new crescent moon), Tergel (full moon), and Huuchid (waxing moon). On the Bituun day, people thoroughly clean around home, herders also clean the livestock barns and shades, to meet the New Year fresh. The Bituun ceremony also includes burning candles to symbolize enlightenment of the samsara and all sentient beings and putting three pieces of ice at the doorway so that the horse of the deity Palden Lhamo could drink as the deity is believed to visit every household on this day. In the evening, families gather together—usually immediate family,[3] in contrast to the large feast gatherings of White Moon day — and see out the old year eating dairy products and buuz. Traditionally, Mongolians settle all issues and repay all debts from the old year by this day.[3]

Traditional food for the festival includes dairy products, rice with curds (tsagaa-цагаа) or rice with raisin (berees-бэрээс), a pyramid of traditional cookies erected on a large dish in a special fashion symbolising Mount Sumeru or Shambhala realm, a grilled side of sheep and minced beef or minced mutton steamed inside pastry, a dish known as buuz, horse meat and traditional cookies.[4] Tsagaan Sar is a lavish feast, requiring preparation days in advance, as the women make large quantities of buuz and freeze them to save for the holiday.[3]

During Mongolia's Communist period, the government banned Tsagaan Sar and tried to replace it with a holiday called "Collective Herder's Day", but the holiday was practiced again after the 1990 Democratic Revolution in Mongolia.[5]

The Mongol calendar in the Tegus Buyantu (Төгсбуянт) system is a lunisolar calendar. The Tegus Buyantu astrology was developed by Mongol high priest Luvsandanzanjantsan (1639-1704), the first reincarnation of the Blama-yin Gegegen (Ламын гэгээн).[6] Tsagaan Sar is celebrated on the first through third days of the first lunar month.

* Note: The start date of Tsagaan Sar depends on longitude. For example, in 2005, Tsagaan Sar began on February 8 in most of the United States and February 9 in much of Asia.