Tsakonian or Tsaconian (τσακώνικα; also Tzakonian or Tsakonic) is a highly divergent modern variety of Greek, spoken in the Tsakonian region of the Peloponnese, Greece. Tsakonian derives from Doric Greek, being its only extant variant.[3] Although it is conventionally treated as a dialect of Greek,[4][5][6] some compendia treat it as a separate language.[1] Tsakonian is critically endangered, with only a few hundred, mostly elderly, fluent speakers left.[1] It is mutually unintelligible with Standard Modern Greek.

It is named after its speakers, the Tsakonians, which in turn may be derived from 'exo-Laconians' 'Outer Lakonians'.[citation needed] 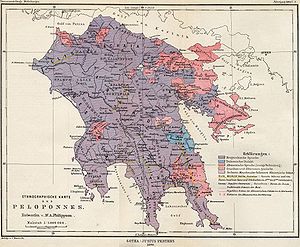 Tsakonian is found today in a group of mountain towns and villages slightly inland from the Argolic Gulf, although it was once spoken farther to the south and west as well as on the coasts of Laconia (ancient Sparta). There was formerly a Tsakonian colony on the Sea of Marmara (or Propontis; two villages near Gönen, Vatika and Havoutsi), probably dating from the 18th century, whose members were resettled in Greece with the 1924 population exchanges.[1] Propontis Tsakonian appears to have died out around 1970.

Tsakonian has no official status. Prayers and liturgies of the Greek Orthodox Church have been translated into Tsakonian, but the ancient Koine of the traditional church services is usually used as in other locations in Greece. Some teaching materials in Tsakonian for use in local schools have reportedly also been produced.[7] 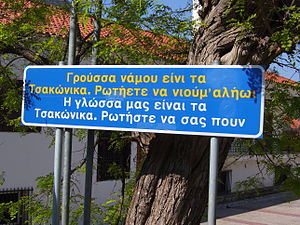 The Propontis dialect was much more heavily influenced by the modern Thracian dialect, and although there were significant grammatical differences, its vocabulary was much closer to Standard Modern Greek. Compare the Northern and Southern word for water, ύο (ýo, derived from Ancient Greek ὕδωρ) to Propontic νερέ and Standard νερό (neré, neró).

However, there has always been contact with Koine Greek speakers and the language was affected by the neighboring Greek dialects. Additionally, there are some lexical borrowings from Arvanitika and Turkish. The core vocabulary remains recognizably Doric, although experts disagree on the extent to which other true Doricisms can be found. There are only a few hundred, mainly elderly true native speakers living,[1] although a great many more can speak the language less than fluently.

Geographical barriers to travel and communication kept the Tsakonians relatively isolated from the rest of Greece until the 19th century, although there was some trade between the coastal towns. The rise of mass education and improved travel beginning after the Greek War of Independence meant that fluent Tsakonian speakers were no longer as isolated from the rest of Greece and there began a rapid decline from an estimated figure of some 200,000 fluent speakers to the present fluent core estimated in the hundreds.

Since the introduction of electricity to all villages in Tsakonia by the late 1950s, the Greek mass media can reach the most remote of areas and profoundly affect the speech of younger speakers. Efforts to revive the language by teaching it in local schools do not seem to have had much success. Standard Modern Greek is the official language of government, commerce and education, and it is possible that the continued modernization of Tsakonia will lead to the language's disappearance sometime this century.[citation needed]

(Note: Tsakonian citation forms for verbs are participles, hence they are given as derived from the ancient participle in -ών.)

Tsakonian in some words preserves the pre-classical Greek [w]-sound, represented in some Ancient Greek texts by the digamma (ϝ). In Tsakonian, this sound has become a fricative [v]: βάννε [ˈvane] "sheep", corresponding to Ancient ϝαμνός [wamˈnos] (Attic ἀμνός).

Word-final [s] > [r], which reflects an earlier process in Laconian; in Tsakonian, it is a liaison phoneme: τίνος [ˈtinos] > τσούνερ [ˈtsuner]

Tsakonian avoids clusters, and reduces them to aspirated or prenasalised stops and affricates:

I had a bird in a cage and I kept it happy
I gave it sugar and wine-grapes
and from the great amount of grapes and their essence,
it got naughty [possibly means it got drunk] and escaped.
And its master now runs after it with the cage in his hands:
Come my bird back where you belong, come to your house
I will remove your old bells and buy you new ones.

Tsakonian avoids consonant clusters, as seen, and drops final [s] and [n]; as a result, syllable structure tends more to CV than in Standard Modern Greek. (The use of digraphs in tradition spelling tends to obscure this). For instances, ancient [hadros] "hard" goes to Tsakonian [a.tʃe], where /t͡ʃ/ can be considered a single phoneme; it is written traditionally with a trigraph as ατσχέ (= atskhe).

Traditionally, Tsakonian used the standard Greek alphabet, along with digraphs to represent certain sounds that either do not occur in Demotic Greek, or that do not commonly occur in combination with the same sounds as they do in Tsakonian. For example, the [ʃ] sound, which does not occur in standard Greek, does occur in Tsakonian, and is spelled σχ (much like German sch). Another sound recalls Czech ř. Thanasis Costakis invented an orthography using dots, spiritus asper, and caron for use in his works, which has been used in his grammar and several other works. This is more like the Czech usage of hačeks (such as š). Lastly, unpalatalized n and l before a front vowel can be written double, to contrast with a palatalised single letter. (e.g. in Southern Tsakonian ένι [eɲi] "he is", έννι [eni] "I am" – the latter corresponding to Northern Tsakonian έμι [emi] and Standard Greek είμαι [ime].)

Note: (K) is for the northern dialect of Kastanitsa and Sitaina, (Λ) and (L) for the southern which is spoken around Leonidio and Tyros.