Ivan Ivanovich (Ива́н Иванович) (28 March 1554 – 19 November 1581) of the House of Rurik, was Tsarevich - the heir apparent - of the Tsardom of Russia, being the second son of Ivan the Terrible by his first wife Anastasia Romanovna. He was thus an elder brother of Feodor.

The young Ivan apparently accompanied his father during the Massacre of Novgorod at the age of 15. For five weeks, he and his father would watch the Oprichniks with enthusiasm and retire to church for prayer. At age 27, Ivan was at least as well read as his father, and in his free time, wrote a biography on Antony of Siya. Ivan is reputed to have once saved his father from an assassination attempt. A Livonian prisoner named Bykovski raised a sword against the elder Ivan, only to be rapidly stabbed by the Tsarevich.

In 1566, it was suggested that the 12-year-old Ivan marry Virginia Eriksdotter, daughter of King Eric XIV of Sweden, but this did not come about. At the age of 17, Ivan was betrothed to Eudoxia Saburova, who had previously been proposed as a bride for Ivan's father. Indeed, she had been one of 12 women paraded before the Tsar for him to make a choice. The Tsar had rejected Eudoxia as a bride for himself but she was later married to the Tsar's son. The Tsar wanted his daughter-in-law to produce an heir very quickly, and this did not happen, so the Tsar banished her to a convent and got his son another bride. This second wife was Praskovia Solova, who quickly met with the same fate as her predecessor, and was also put away into a convent. The Tsar then got his son a third wife, Yelena Sheremeteva, who was found to be pregnant on October 1581. That child was presumably miscarried around the time when Ivan died by his father's hand in November 1581. 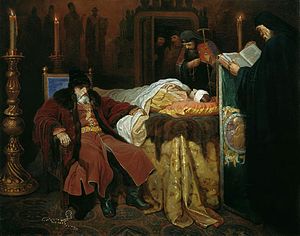 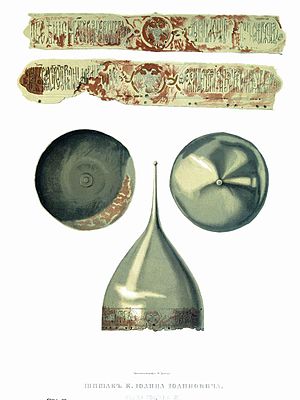 Ivan Ivanovich's relationship with his father began to deteriorate during the later stages of the Livonian War. Angry with his father for his military failures, Ivan demanded to be given command of some troops to liberate besieged Pskov.

Their relationship further deteriorated when on 15 November, the Tsar, after seeing his pregnant daughter-in-law wearing unconventionally light clothing, physically assaulted her. Hearing her screams, the Tsarevich rushed to his wife's defense, angrily shouting, "You sent my first wife to a convent for no reason, you did the same with my second, and now you strike the third, causing the death of the son she holds in her womb." Yelena subsequently suffered a miscarriage. The Tsarevich confronted his father on the matter, only to have the topic changed to his insubordination regarding Pskov. The elder Ivan accused his son of inciting rebellion, which the younger Ivan denied, but vehemently stuck to the view that Pskov should be liberated. Angered, Ivan's father struck him on the head with his scepter. Boris Godunov, who was present at the scene, tried to intervene but received blows himself. The younger Ivan fell, barely conscious and with a bleeding wound on his temple. The elder Ivan immediately threw himself at his son, kissing his face and trying to stop the bleeding, whilst repeatedly crying, "May I be damned! I've killed my son! I've killed my son!" The younger Ivan briefly regained consciousness and said "I die as a devoted son and most humble servant". For the next few days, the elder Ivan prayed incessantly for a miracle, but to no avail, and the Tsarevich died on 19 November 1581.