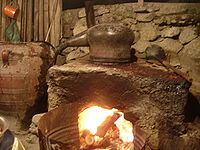 Tsikoudia (τσικουδιά) –or also commonly raki (ρακή) in the eastern part of Crete – is an alcoholic beverage, a fragrant, grape-based pomace brandy of Cretan origin that contains 40%–65% alcohol by volume.[1] Tsikoudia is made by distilling of pomace, i.e., the pieces of grapes (sometimes including the stems and seeds) that were pressed for the winemaking process. The pomace is kept for about six weeks after the grapes have been pressed, in a tightly-sealed barrel, and then the fermented mush is distilled.

It is similar to the tsipouro made in mainland Greece, to the Spanish orujo, French marc, Georgian chacha, Portuguese bagaceira and Bulgarian, Serbian, Croatian rakija (in Istria: grappa), Romanian tescovină.[2] In the eastern part of Crete tsikoudia is commonly referred to as raki, but apparently less so in the west.

It is often home-produced by individuals in villages throughout Crete, and so the alcohol content varies by producer. Typically each Cretan village has one or two residents who are licensed to distill, and tsikoudia is produced continuously for two or three weeks in late October and early November.

Tsikoudia is sometimes served cold from a bottle kept in a freezer. This is commonly offered as an after dinner digestif and in most tavernas in Crete it is offered as a complimentary aperitif with fruits and sweets after the meal.

It can be flavored using lemon rind, rosemary, or honey (rakomelo).