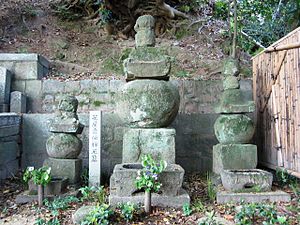 The grave of Dota Gozen at Shitennō-ji in Tsu, Mie.

Dota Gozen (土田御前, Dota Gozen?, 1511 - died February 26, 1594) was married to Oda Nobuhide and was the mother of Oda Nobunaga, a major feudal warlord in the Sengoku period of Japan. She was also the mother of three of his brothers, Nobuyuki, Nobukane and Hidetaka; and two of his sisters, Oinu and Oichi. It is assumed that she is the daughter of Dota Masahisa, but that is unclear because her real name is unknown. She is buried at Shitennō-ji in modern-day Tsu, Mie Prefecture.

According to rumors, Gozen did not like Nobunaga and instead preferred his well-mannered brother, Nobuyuki. When Nobuyuki lost a family struggle to his brother, Gozen stepped in, asking Nobunaga to take mercy on his brother and Nobunaga acquiesced. However, Nobuyuki eventually tried to usurp Nobunaga's powers again and, this time, Nobunaga killed him.