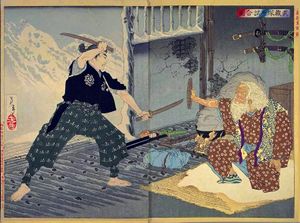 An ukiyo-e print depicting the fictional encounter between Tsukahara Bokuden and the legendary swordsman, Miyamoto Musashi.
In this Japanese name, the family name is Tsukahara.

Tsukahara Bokuden (塚原 卜伝?, 1489 - March 6, 1571) was a famous swordsman of the early Sengoku period. He was widely regarded as a kensei (sword saint). He was the founder of a new Kashima style of fencing, and served as an instructor of Shogun Ashikaga Yoshiteru and Ise provincial governor daimyō Kitabatake Tomonori.[1]

Bokuden was born into the Yoshikawa family within the Hitachi Province of Honshu. The family was one of four Karō families serving the Kashima clan; one of the cadet branches of the Imperial House of Japan (descendants of the Imperial Prince Kazurahara (葛原親王?, 786–853)). Bokuden was adopted by the Tsukahara family, an offshoot of the Kashima clan; he was styled as Tsukahara Bokuden Takamoto. Earlier in his life, his name was Tsukahara Shin'emon Takamoto.

Bokuden learned the Tenshin Shōden Katori Shintō-ryū from his adopted father and later honed his skills by engaging in musha shugyō (warrior's ascetic training), traveling throughout Japan and training with most of the skillful and knowledgeable swordsmen of the day. Tsukahara Bokuden was the classic knight-errant; a rich nobleman, he travelled the Japanese countryside, often with a full entourage. He later systematized the teaching of the Kashima area's local martial arts, including such approaches to combat as Kashima no tachi and Ichi no tachi. After allegedly receiving a divine inspiration from Takemikazuchi no kami, the deity of Kashima Shrine, he named his martial system as Kashima Shintō-ryū. He also, for a brief period, called his system Mutekatsu-ryū ("winning without hands").

In one anecdote recorded in the Kōyō Gunkan, Bokuden was challenged by a mannerless ruffian. When asked about his style, Bokuden replied that he studied the "Style of No Sword". The ruffian laughed and insultingly challenged Bokuden to fight him without a sword. Bokuden then agreed to fight the man without his sword but suggested they row out to a nearby island on Lake Biwa to avoid disturbing others. The ruffian agreed, but when he jumped from the boat to the shore of the island, drawing his blade, Bokuden pushed the boat back out, leaving the ruffian stranded on the island. Bokuden explained: "This is my no-sword school".

A famous Japanese folk tale tells of the young Miyamoto Musashi challenging Bokuden to a duel during a meal. When Musashi struck first, Bokuden parried the sword with the lid of the iron pot he was eating from. In reality the story has no basis in fact, Bokuden had died 13 years before Musashi was born.

According to Tokitsu Kenji, saint Tsukahara fought his first duel to the death at the age of 17 and won. Then, he duelled again 19 times and fought in 37 battles. He was wounded 6 times in total... but only by arrows. In total, his death toll seems to have reached 212.

Bokuden died of natural causes in 1571. His grave at Temple Baiko of Suga (須賀の梅香寺?) is in Kashima, Ibaraki. Those devoted to the art of Japanese sword-fighting, would make pilgrimages to the Kashima Shrine because it is considered the spiritual home of kenjutsu.