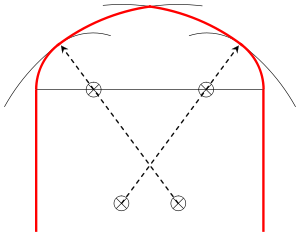 Construction of a four-centred arch

A four-centred arch, also known as a depressed arch or Tudor arch, is a low, wide type of arch with a pointed apex. It is much wider than its height and gives the visual effect of having been flattened under pressure. Its structure is achieved by drafting two arcs which rise steeply from each springing point on a small radius, and then turning into two arches with a wide radius and much lower springing point.

This type of arch, when employed as a window opening, lends itself to very wide spaces, decoratively filled with many narrow vertical mullions and horizontal transoms. The overall effect produces a grid-like appearance of regular, delicate, rectangular forms with an emphasis on the perpendicular. It is also employed as a wall decoration in which arcade and window openings form part of the whole decorative surface.

The style, known as Perpendicular Gothic, which evolved from this treatment, is specific to England, and is very similar to contemporary Spanish style in particular. It was employed to great effect through the 15th century and first half of the 16th, as Renaissance styles were much slower to arrive in England than in Italy and France.

It can be seen notably at the East End of Gloucester Cathedral where the East Window is said to be as large as a tennis court. There are three very famous royal chapels and one chapel-like Abbey which show the style at its most elaborate- Kings College Chapel, Cambridge; St George's Chapel, Windsor; Henry VII's Chapel at Westminster Abbey, and Bath Abbey. However, very many simpler buildings, especially churches, built during the wool boom in East Anglia, are fine examples of the style.

Use in English architecture

In English architecture, it is often known as a Tudor arch,[1] as it was a common architectural element during the reign of the Tudor dynasty (1485–1603). The Gothic period's pointed arch was blunted into the flattened Tudor arch. The Tudor arch, placed over the oriel window, or a bay window supported on a bracket or corbel, was a striking window design of the Tudor period.[2][3]

Use in Islamic architecture

The four-centred arch is widely used in Islamic architecture, especially that of Persianate cultures. For example, almost all iwans use this type of arch.