From Infogalactic: the planetary knowledge core
Jump to: navigation, search
This article is about the heraldic element. For the 1936 film, see Tudor Rose (film). For other uses, see Tudor rose (disambiguation). 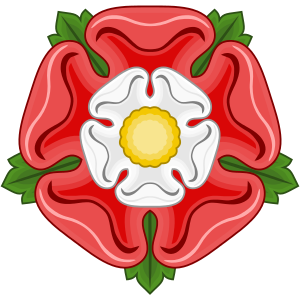 The Tudor rose (sometimes called the Union rose) is the traditional floral heraldic emblem of England and takes its name and origins from the Tudor dynasty.

The white rose of the House of York

The red rose of the House of Lancaster

When Henry VII took the crown of England from Richard III in battle (1485), he brought the end of the retrospectively-dubbed 'Wars of the Roses' between the House of Lancaster (one monarch of which had sometimes used the badge of a red or gold rose) and the House of York (which had lately used a white-rose badge). Henry's father was Edmund Tudor from the House of Richmond (maternally), and his mother was Margaret Beaufort from the House of Lancaster; in January 1486 he married Elizabeth of York to bring all factions together. (In battle, Richard III fought under the banner of the boar, and Henry under the banner of the dragon of his native Wales.) The white rose versus red rose juxtaposition was Henry's invention.[1] The historian Thomas Penn writes:

The "Lancastrian" red rose was an emblem that barely existed before Henry VII. Lancastrian kings used the rose sporadically, but when they did it was often gold rather than red; Henry VI, the king who presided over the country's descent into civil war, preferred his badge of the antelope. Contemporaries certainly did not refer to the traumatic civil conflict of the 15th century as the "Wars of the Roses". For the best part of a quarter-century, from 1461 to 1485, there was only one royal rose, and it was white: the badge of Edward IV. The roses were actually created after the war by Henry VII.[1]

On his marriage, Henry VII adopted the Tudor rose badge conjoining the white rose of York and the red rose of Lancaster. The Tudor rose is occasionally seen divided in quarters (heraldically as "quartered") and vertically (in heraldic terms per pale) red and white.[2] More often, the Tudor rose is depicted as a double rose,[3] white on red and is always described, heraldically, as "proper". 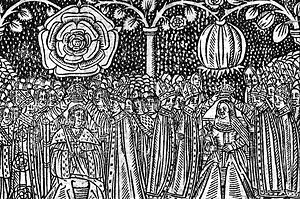 16th century woodcut of the coronation of Henry VIII and Catherine of Aragon showing them with their badges: the Tudor rose and the pomegranate

During his reign, Henry VIII had the legendary "Round Table" at Winchester Castle – then believed to be genuine[4] – repainted. The new paint scheme included a Tudor rose in the centre. Though previous to this, his father Henry Vll had built a chapel at Westminster Abbey dedicated to himself (it was later used for the site of his tomb) and it was decorated principally with Tudor Roses and Beaufort portullises - as a form of propaganda to define his claim to the throne.

The Tudor rose badge may appear slipped and crowned: shown as a cutting with a stem and leaves beneath a crown; this badge appears in Nicholas Hilliard's "Pelican Portrait" of Elizabeth I and since an Order in Council (dated 5th November 1800), has served as the Royal Floral emblem of England.

The Tudor rose may also appear dimidiated (cut in half and combined with half another emblem) to form a compound badge. The Westminster Tournament Roll includes a badge of Henry and his first wife Catherine of Aragon with a slipped Tudor rose conjoined with Catherine's personal badge, the pomegranate;[5] their daughter Mary I bore the same badge.[6] James I of England and VI of Scotland used a badge consisting of a Tudor rose dimidiated with a thistle and surmounted by a royal crown.[7]

The crowned and slipped Tudor Rose is used as the plant badge of England, as Scotland uses the thistle, Ireland uses the shamrock, and Wales uses the leek. As such, it is seen on the dress uniforms of the Yeomen Warders at the Tower of London, and of the Yeomen of the Guard. It features in the design of the British Twenty Pence coin minted between 1982 and 2008, and in the royal coat of arms of the United Kingdom. It also features on the coat of arms of Canada.

The Tudor rose makes up part of the cap badge of the Intelligence Corps of the British Army. It is also notably used (albeit in a monochromatic form) as the symbol of the English Tourist Board.[8] and as part of the badge of the Supreme Court of the United Kingdom.

The Tudor Rose is used as the emblem of the Nautical Training Corps, a uniformed youth organisation founded in Brighton in 1944 with 20 units in South East England. The Corps badge has the Tudor Rose on the shank of an anchor with the motto "For God, Queen and Country". It is also used as part of the Corps' cap badge.

The borough of Queens in New York City uses a Tudor Rose on its flag and seal.

The Tudor rose is also used in the badges of some Portuguese Army units, after William, Count of Schaumburg-Lippe, namely Lisbon Classification and Selection Cabinet[9] and Graça Fort.[10]