A tughra (Ottoman Turkish: طغرا‎ tuğrâ) is a calligraphic monogram, seal or signature of a sultan that was affixed to all official documents and correspondence. It was also carved on his seal and stamped on the coins minted during his reign. Very elaborate decorated versions were created for important documents that were also works of art in the tradition of Ottoman illumination, such as the example of Suleiman the Magnificent in the gallery below.

The tughra was designed at the beginning of the sultan's reign and drawn by the court calligrapher or nişancı on written documents. The first tughra belonged to Orhan I (1284–1359), the second ruler of the Ottoman Empire and it evolved until it reached the classical form in the tughra of Sultan Suleiman the Magnificent (1494–1566).[1]

Tughras served a purpose similar to the cartouche in ancient Egypt or the Royal Cypher of British monarchs. Every Ottoman sultan had his own individual tughra.

Visual elements of a tughra

The tughra has a characteristic form, two loops on the left side, three vertical lines in the middle, stacked writing on the bottom and two extensions to the right. Each of these elements has a specific meaning, and together they make up the form that is easily recognizable as a tughra. 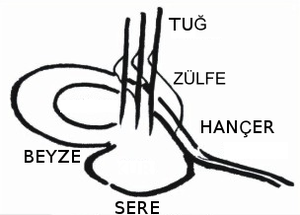 Visual Elements of a Tughra

The name of the sultan is written out in the bottom section, called a sere. Depending on the period, this name can be as simple as Orhan, son of Osman in the first tughra in 1326. In later periods honorifics and prayers are also added to the name of the tughra holder and his father.

The loops to the left of the tughra are called beyze, from Arabic meaning egg. Some interpretations of tughra design claim that the beyzes are supposed to symbolize the two seas the sultans held sway over: the outer larger loop signifying the Mediterranean and the inner, smaller loop signifying the Black Sea.

The vertical lines on the top of the tughra are called tuğ, or flagstaff. The three tugs signify independence. The S-shaped lines crossing the tugs are called zülfe and they, together with the tops of the tugs that also look to the right, signify that the winds blow from the east to the west, the traditional movement of the Ottomans.

The lines to the right of the tughra are called hançer and signify a sword, symbol of power and might.

Tughras of the Ottoman sultans

Although the tughra is largely identified with the Ottoman Sultans, they have also sometimes been used in other Turkic states, such as the Qajar dynasty, Safavid Empire and the Khanate of Kazan. Later, tughras were used among the Tatars of Imperial Russia. 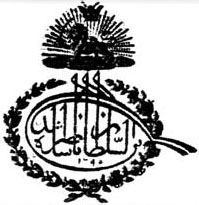 The official imperial Tughra of the Mughal Empire.

The Mughal Emperors are also known to have used calligraphic symbols, alongside the Ottomans, the Mughal "Tughra" was circular in shape with three points at its tip, beside the calligraphic signature of the emperor.[2][non-primary source needed]

A Firman issued by the Mughal Emperor Shah Alam II; containing the official Mughal "Tughra" in black ink alongside the calligraphic signature of Shah Alam II in red.

There are modern artists of calligraphy that use the characteristic tughra form today. Examples are the tughras of Russian president Vladimir Putin[3] and Akihito,[4] the Emperor of Japan, created by artist Vladimir Popov.[5]