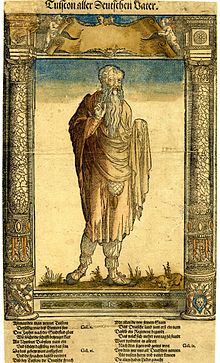 Tuiscon (Tuisto) as depicted in a German broadside by Nikolaus Stör c. 1543, with a caption by Burkard Waldis.

According to Tacitus's Germania (98 AD), Tuisto is the divine ancestor of the Germanic peoples. The figure remains the subject of some scholarly discussion, largely focused upon etymological connections and comparisons to figures in later (particularly Norse) Germanic mythology. In the larger Indo-European pantheon, Tuisto is equated to the Vedic Tvastar. 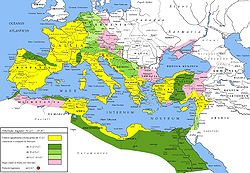 This map shows the approximate locations of the major Germanic tribes in and around the geographical region of Germania, as mentioned in Tacitus' work the Germania

The Germania manuscript corpus contains two primary variant readings of the name. The most frequently occurring, Tuisto, is commonly connected to the Proto-Germanic root tvai ("two") and its derivative tvis ("twice"; "doubled"). Allusions to intersex is entirely conjectural, as the tvia/tvis roots are also the roots of any number of other concepts/words in the Germanic languages. Take for instance the Germanic "twist", which, in all but the English has the primary meaning of "dispute/conflict".[1]

The second variant of the name, occurring originally in manuscript E, is Tuisco (sometimes rendered Tuiscon). One proposed etymology for this variant reconstructs a Proto-Germanic tiwisko, and connects this with Proto-Germanic Tiwaz, yielded the meaning "son of Tiu". This interpretation implies that Tuisco is the son of the sky god (Proto-Indo-European Dyeus) and the earth-goddess.[2]

Connections have been proposed between the 1st century figure of Tuisto and the hermaphroditic primeval being Ymir in later Norse mythology, attested in 13th century sources, based upon etymological and functional similarity.[3] Meyer (1907) sees the connection as so strong, that he considers the two to be identical.[4] Lindow (2001), while mindful of the possible semantic connection between Tuisto and Ymir, notes an essential functional difference: while Ymir is portrayed as an "essentially … negative figure" - Tuisto is described as being "celebrated" (celebrant) by the early Germanic peoples in song, with Tacitus reporting nothing negative about Tuisto.[5]

Jacob (2005) attempts to establish a genealogical relationship between Tuisto and Ymir based on etymology and a comparison with (post-)Vedic Indian mythology: as Tvastr, through his daughter Saranyū and her husband Vivaswān, is said to have been the grandfather of the twins Yama and Yami, so Jacob argues that the Germanic Tuisto (assuming a connection with Tvastr) must originally have been the grandfather of Ymir (cognate to Yama). Incidentally, Indian mythology also places Manu (cognate to Germanic Mannus), the Vedic progenitor of mankind, as a son of Vivaswān, thus making him the brother of Yama/Ymir.[6]

Tacitus relates that "ancient songs" (Latin carminibus antiquis) of the Germanic peoples celebrated Tuisto as "a god, born of the earth" (deum terra editum'; see Autochthon (ancient Greece)). These songs further attributed to him a son, Mannus, who in turn had three sons, the offspring of whom were referred to as Ingaevones, Herminones and Istaevones, living near the Ocean (proximi Oceano), in the interior (medii), and the remaining parts (ceteri) of the geographical region of Germania, respectively.[7] 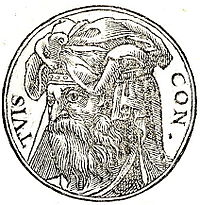 Tacitus's report falls squarely within the ethnographic tradition of the classical world, which often fused anthropogony, ethnogony, and theogony together into a synthetic whole.[8] The succession of father-son-three sons parallels occurs in both Germanic and non-Germanic Indo-European areas.[9] The essential characteristics of the myth have been theorized as ultimately originating in Proto-Indo-European society around 2,000 BC.[10]

According to Rives (1999), the fact that the ancient Germanic peoples claimed descent from an earth-born god was used by Tacitus to support his contention that they were an indigenous population: the Latin word indigena was often used in the same sense as the Greek autochthonos, meaning literally '[born from] the earth itself' (from χθών – chthōn "earth").[11] Lindauer (1975) notes that, although this claim is to be judged as one made out of simple ignorance of the facts on the part of Tacitus, he was not entirely wrong, as he made the judgement based on a comparison with the relatively turbulent Mediterranean region of his day.[12]

The sequence in which one god has a son, who has three famous sons, has a resemblance to how Búri has a son Borr who has three sons: Odin, Vili and Vé.[citation needed] The same tradition occurs with the Slavs and their expansion, in the legend of Lech, Čech and Rus.

In 1498, a monk named Annio da Viterbo published fragments known as "Pseudo-Berossus", now considered a forgery, claiming that Babylonian records had shown that Tuiscon or Tuisto, the fourth son of Noah, had been the first ruler of Scythia and Germany following the dispersion of peoples, with him being succeeded by his son Mannus as the second king. Later historians (e.g. Johannes Aventinus) managed to furnish numerous further details, including the assertion by James Anderson that this Tuiscon was in fact none other than the biblical Ashkenaz, son of Gomer.[13]

Novalis refers to Tuisto in an early poem, written in 1788. He invokes the mythological figure in an idealized form, belonging to the spirit of a magic era, long bygone.[14]