From Infogalactic: the planetary knowledge core
(Redirected from Tunisians)
Jump to: navigation, search

The majority (99% [1]) of modern Tunisians are Arabized Berber or Arab-Berber,[2] and are speakers of Tunisian Arabic. However, there is also a small (1 percent at most) minority of indigenous Berbers inhabiting mainly the Jabal Dahar mountains in the South East and on the island of Jerba. The Berbers primarily speak Berber languages, often called Shilha or Tashlihit,[3] or have shifted to Tunisian Arabic. 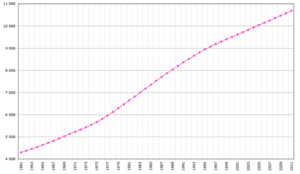 Demographics of Tunisia, Data of FAO; Number of inhabitants in thousands.

Nearly all Tunisians (99 percent of the population) are Muslim.[4] There is a Jewish population on the southern island of Djerba and Tunis. There also exists a small autochthonous group of Christian adherents.[1][5]

Structure of the population [7]

While the vast majority of modern Tunisians identify themselves as Arabs, they are predominantly descended from Berber groups, with some Arab input. Tunisians are also descended, to a lesser extent, from other African, Middle Eastern and European peoples, specifically the Phoenicians/Punics, Romans, Vandals, Greeks, Hispanic, Italians, Turkic, Haratin, and French. In sum, a little less than 20 percent of their genetic material (Y-chromosome analysis) comes from present day Arabian Peninsula, Europe or Sub-Saharan Africa.[8][9][10] "In fact, the Tunisian genetic distances to European samples are smaller than those to North African groups. (...) This could be explained by the history of the Tunisian population, reflecting the influence of the ancient Punic settlers of Carthage followed, among others, by Roman, Byzantine, Arab and French occupations, according to historical records. Notwithstanding, other explanations cannot be discarded, such as the relative heterogeneity within current Tunisian populations, and/or the limited sub-Saharan genetic influence in this region as compared with other North African areas, without excluding the possibility of the genetic drift, whose effect might be particularly amplified on the X chromosome.",[11][12] This suggests a fairly significant European input to Tunisian genetics compared to other neighbouring populations.

However, later research has suggested instead that Tunisians exhibit a mostly indigenous North African genetic make up similar to other Maghreb populations; characterized by a high amount of native North African genes.[13]

Listed here are the human Y-chromosome DNA haplogroups in Tunisia.[14]

The following demographic statistics are from the CIA World Factbook, unless otherwise indicated.

The literacy rate among the Tunisian population increased greatly after its independence from France. According to the 1996 census data,[15] the literacy rate of the last generation of Tunisian men educated under the French rule (those born 1945-49) was less than 65%. For the first generation educated after independence (born 1950-1954), literacy in Arabic among males had increased to nearly 80%. (Sixty-two percent were also literate in French and 15 percent literate in English). Among the youngest generation included in the census (those born 1980-1984), 96.6% were literate in Arabic.