A tuple is a finite ordered list of elements. In mathematics, an n-tuple is a sequence (or ordered list) of n elements, where n is a non-negative integer. There is only one 0-tuple, an empty sequence. An n-tuple is defined inductively using the construction of an ordered pair. Tuples are usually written by listing the elements within parentheses "

" and separated by commas; for example,

denotes a 5-tuple. Sometimes other symbols are used to surround the elements, such as square brackets "[ ]" or angle brackets "

". Braces "{ }" are never used for tuples, as they are the standard notation for sets. Tuples are often used to describe other mathematical objects, such as vectors. In computer science, tuples are directly implemented as product types in most functional programming languages. More commonly, they are implemented as record types, where the components are labeled instead of being identified by position alone. This approach is also used in relational algebra. Tuples are also used in relation to programming the semantic web with Resource Description Framework or RDF. Tuples are also used in linguistics[1] and philosophy.[2]

Although these uses treat ‑tuple as the suffix, the original suffix was ‑ple as in "triple" (three-fold) or "decuple" (ten‑fold). This originates from a medieval Latin suffix ‑plus (meaning "more"[dubious – discuss]) related to Greek ‑πλοῦς, which replaced the classical and late antique ‑plex (meaning "folded"), as in "duplex".[3]

Names for tuples of specific lengths

The general rule for the identity of two n-tuples is

Thus a tuple has properties that distinguish it from a set.

There are several definitions of tuples that give them the properties described in the previous section.

Another way of modeling tuples in Set Theory is as nested ordered pairs. This approach assumes that the notion of ordered pair has already been defined; thus a 2-tuple

This definition can be applied recursively to the (n - 1)-tuple:

A variant of this definition starts "peeling off" elements from the other end:

This definition can be applied recursively:

Using Kuratowski's representation for an ordered pair, the second definition above can be reformulated in terms of pure set theory: 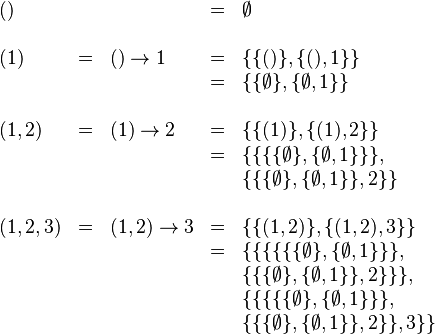 In discrete mathematics, especially combinatorics and finite probability theory, n-tuples arise in the context of various counting problems and are treated more informally as ordered lists of length n.[4] n-tuples whose entries come from a set of m elements are also called arrangements with repetition, permutations of a multiset and, in some non-English literature, variations with repetition. The number of n-tuples of an m-set is mn. This follows from the combinatorial rule of product.[5] If S is a finite set of cardinality m, this number is the cardinality of the n-fold Cartesian power S × S × ... S. Tuples are elements of this product set.

In type theory, commonly used in programming languages, a tuple has a product type; this fixes not only the length, but also the underlying types of each component. Formally:

and the projections are term constructors:

The tuple with labeled elements used in the relational model has a record type. Both of these types can be defined as simple extensions of the simply typed lambda calculus.[6]

The notion of a tuple in type theory and that in set theory are related in the following way: If we consider the natural model of a type theory, and use the Scott brackets to indicate the semantic interpretation, then the model consists of some sets

(note: the use of italics here that distinguishes sets from types) such that:

The n-tuple of type theory has the natural interpretation as an n-tuple of set theory:[7]

The unit type has as semantic interpretation the 0-tuple.