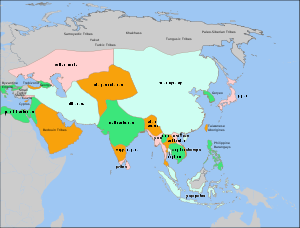 Asia in 1335, showing including Turco-Mongol culture nations such as the Golden Horde and the Chagatai Khanate.

The Turco-Mongol or Turko-Mongol tradition was a cultural synthesis that arose during the early 14th century among the ruling elites of Mongol Empire successor states such as the Chagatai Khanate and Golden Horde. These elites adopted Turkic languages and different religions such as Buddhism and Islam, while retaining Mongol political and legal institutions.[1] Many later Central Asian states drew heavily on this tradition, including the Timurid Empire, the Khanate of Kazan, the Nogai Khanate, the Crimean Khanate, and the Mughal Empire.