From Infogalactic: the planetary knowledge core
(Redirected from Turhan Hatice)
Jump to: navigation, search
In this Ottoman Turkish style name, Turhan Hatice is the given name, the title is Sultan, and there is no family name.

Turhan Hatice Sultan (c. 1627 – 4 August 1683; Turhan meaning "Of mercy"), was Haseki Sultan of the Ottoman Sultan Ibrahim (reign 1640-1648) and Valide Sultan as mother of Mehmed IV (reign 1648-1687). Turhan Hatice was prominent for the regency of her young son and her building patronage. She and her mother-in-law, Kösem Sultan, are the only two women in Ottoman history to be regarded as official regents and had supreme control over the Ottoman Empire. Turhan Hatice herself was the only one in Ottoman history to equally share the power of running the entire empire with Ottoman Sultan legally, although in fact she transferred her political power to the grand vizier. As a result, Turhan became one of the prominent figures during the era known as Sultanate of Women.

Turhan Hatice, whose original name is unknown, was considered to be of East Slavic origin, either Russian or Ukrainian.[1] She was captured during one of the raids by Tatars and sold into slavery. When she was about 12 years old, Turhan was sent to the Topkapı Palace as a gift, from the Khan of Crimea, to the mother of Sultan Ibrahim, Kösem Sultan.[2][3]

It was probably Kösem Sultan who gave Hatice to Ibrahim as a concubine. On January 2, 1642 Turhan gave birth to a son, the future sultan Mehmed IV.[4] 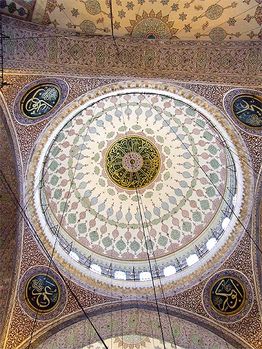 Turhan Hatice was one of the eight Haseki Sultans of Ibrahim I. However, she was not his legal wife. She was ranked in the Harem as Dördüncü Haseki Sultan, which literally means fourth sultana consort.

Ibrahim's behaviour sparked talks of deposing the sultan. On August 8, 1648, Ibrahim was dethroned and several days later he was strangled.[5] At the head of the Ottoman Empire stood the child sultan, Mehmed IV. With Mehmed's ascendancy, the position of Valide Sultan ("mother of the reigning sultan") should have gone to Turhan. However, Turhan was overlooked due to her youth and inexperience. Instead, the sultan's grandmother and the previous Valide Sultan, Kösem Sultan, was reinstated to this high position. Kösem Sultan was a Valide (mother) under two sons, thus having the more experience of the two women.[6]

However, Turhan turned out to be too ambitious a woman to lose such a high position without a fight. In her struggle to become Valide Sultan, Turhan was supported by the chief black eunuch in her household and the grand vizier, while Kösem was supported by the Janissary Corps. Although, Kösem’s position as Valide was seen as the best for the government, the people resented the influence of the Janissaries on the government.[7]

In this power struggle, Kösem planned to dethrone Mehmed and replace him with another young grandson. According to one historian, this switching had more to do with replacing an ambitious daughter-in-law with one who was more easily controlled. The plan was unsuccessful as it was reported to Turhan by Meleki Hatun, one of Kösem’s slaves.[7] Whether Turhan sanctioned it or not, Kösem Sultan was murdered three years after becoming regent for her young grandson.

As Valide Sultan and Regent

With the death of her rival, Turhan became the Valide Sultan. As a regent, Turhan wielded great power. She accompanied her son the sultan to important meetings and on several occasions spoke from behind her curtained sitting place. She was deeply loved and respected by her son, the sultan. He considered her as his co-ruler of the empire and gave her great power, regarding her the official empress of the empire. She was the only Valide Sultan in history to equally share the power of running the entire empire with her son, surpassing even Kösem in the fullness of her power. Due to her inexperience, Turhan relied on other members of the government to advise her on political matters. This is evident from her correspondence to the grand viziers.[8]

Turhan’s regency was marred by at least two factors: the war with the Venetians for the island of Crete, and the financial crisis that arose from the high expenses of waging war. Weak grand viziers did not improve the situation. However, in 1656 Köprülü Mehmed Pasha was appointed to the position of grand vizier. His condition upon accepting the post was that he be given greater authority than his predecessors.[9]

Thus, Turhan transferred her political power to that of the grand vizier.

Leslie Peirce sees the year 1656 as a turning point in Turhan’s life. By providing the grand vizier with “unlimited” authority, Turhan limited her own power on the political stage. However, she channeled her energies into other areas of life. Turhan began to build.

Her first building project began in 1658. Perhaps in answer to the Venetian threat, the Valide built two fortresses at the entrance to the Dardanelles. The fortresses, one on the European side and the other on the Asian side, can still be seen today. This project put Turhan in the same league as Mehmed the Conqueror and other sultans who built fortresses in the same area.[10]

However, Turhan’s greatest accomplishment would be built in the capital of the empire, Istanbul. Yeni Mosque has an interesting story. The initial construction was started by one of Turhan’s predecessors, Safiye Sultan. She had chosen the commercial quarter of the city, Eminonü as the location of the mosque. This area was inhabited by non-Muslims. By building a new mosque in Eminönü, Safiye wanted to Islamize the area.[11] To build on this site meant that land had to be appropriated from the local non-Muslim residents, an act that had not gone smoothly.[12] In the year 1597, the first stones were laid. At the death of Safiye’s son, Mehmed III, the construction of the mosque stopped as she was no longer the Valide. The construction was abandoned for 57 years, but was restarted after the area was devastated by the Great Fire of 1660.[13] The mosque received a second chance when Turhan decided to complete what had been started by Safiye Sultan. After its completion in 1665, the complex contained not only the mosque, but also a school, public fountains, a market and a tomb.[14] According to Peirce the Yeni Mosque gained the distinction of being the first imperial mosque built by a woman.[15]

Turhan was the last woman to wield such great power as to act as a regent to a young son.[16] As women were not seen in public in the Ottoman Empire, it was through her patronage of building that Turhan showed herself to her subjects. To defend the entrance to the Dardanelles, Turhan built two fortresses and thus became the guardian of the empire.

Turhan Hatice, Valide Sultan and regent to her young son, Mehmed IV, died in 1683. She was buried in the tomb of the Yeni Mosque. She lies alongside her son and her descendents.[17]