The Turin Metro (Italian: Metropolitana di Torino) is the VAL metro system serving Turin. It is operated by Gruppo Torinese Trasporti (GTT), a public company controlled by the municipality of Turin. The system comprises one 13.2-kilometre (8.2 mi) line with 21 stations connecting Fermi station in Collegno with the Lingotto multifunctional centre in Turin.[1] 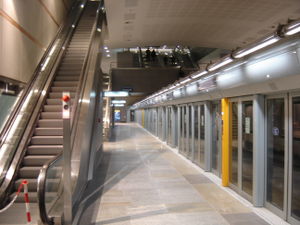 Station Fermi during the 2006 Winter Olympics.

A new company committed to the development of a metro system in Turin was founded in 1960s. Several projects and feasibility studies were made for a 7 km underground line under the city centre and then for a line connecting FIAT factories to surrounding neighborhoods, but eventually all the proposals were rejected.

In the mid-1980s a new proposal for a system of 5 fast tram lines at-grade was approved. However, only the planned line 3 was built following the original project, while the others eventually were built either as regular tram lines, with no dedicated lane, or as bus lines.

A new project was approved in 1995 for a line running from Campo Volo on the west border of the city to Porta Nuova, the main railway station in Turin. The project was put in hold due to lack of funds.

The project for the underground line was resumed in April 1999 with a longer route to Lingotto based on the VAL system. Works on the line began on 19 December 2000, part of the works for the Turin 2006 Winter Olympics. The first section from Fermi to XVIII Dicembre was opened on 4 February 2006, while the second section on the south to Porta Nuova opened on 5 October 2007. Porta Susa station opened later on 9 September 2011. The last part of the line on the south to Lingotto was inaugurated on 6 March 2011.[4]

The single journey ticket costs €1.50 and is valid also outside of the metro for unlimited trips on other public transport in the city for 90 minutes.[5]

Moreover, any form of urban transport season ticket is valid also for the metro system.[5]

Two additional stations are planned to reach the Southern boundary of the city, under Piazza Bengasi. This southern extension will be completed not before November 2017.[7]

A further Western extension is planned to reach the boundaries of Collegno and reach Cascine Vica district in the city of Rivoli. The plan comprises four additional stations, included Collegno FS which will interchange with the central railway station of the city of Collegno.[8]

A second line is currently under planning. The line will connect South-Western suburbs of the city (Orbassano and Beinasco) with northern district of Barriera di Milano. First 26 stations are already defined, starting from Mirafiori Sud district to Barriera di Milano, crossing the Line 1 at Porta Nuova station and serving key points as Politecnico di Torino University and Piazza Castello, one of the major central squares of the city.

Part of the Southern track will be elevated to reduce building costs (starting from Piazza Cattaneo to Cimitero Sud). On Northern side, from Vanchiglia to Rebaudengo, it will follow an old (currently abandoned) railway track, which was used to connect the old and abandoned scalo Vanchiglia to the main Turin railway.

A 4 stations extension is planned to cover suburbs of Beinasco and Orbassano and to reach terminus Pasta di Rivalta in the city of Rivalta di Torino.