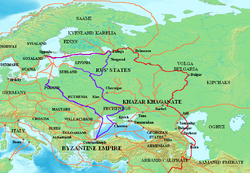 A map of the main Varangian routes

In addition, there were also voyages to Western Europe mentioned on runestones that are treated in the articles Viking Runestones, England Runestones and Hakon Jarl Runestones.

Most of the runestones were raised during the Christianization of the 11th century when the making of runestones was fashionable, but notably the Kälvesten Runestone Ög 8 was made in the 9th century when the Varangians played a central role in what would become Russia and Ukraine. This vast area was a rich source of pelts, hides and people, and it was an important component in the contemporary Swedish economy.[2]

All of the stones were engraved in Old Norse with the Younger Futhark.