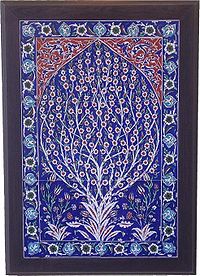 Turkish art refers to all works of visual art originating from the geographical area of what is present day Turkey since the arrival of the Turks in the Middle Ages. Turkey also was the home of much significant art produced by earlier cultures, including the Hittites, Ancient Greeks, and Byzantines. The 16th and 17th centuries are generally recognized as the finest period for art in the Ottoman Empire, much of it associated with the huge Imperial court. Ottoman architecture developed traditional Islamic styles, with some technical influences from Europe, into a highly sophisticated style, with interiors richly decorated in coloured tiles, seen in palaces, mosques and turbe mausolea.

Other forms of art represented developments of earlier Islamic art, especially those of Persia, but with a distinct Turkish character. Ottoman miniature and Ottoman illumination cover the figurative and non-figurative elements of the decoration of manuscripts, which tend to be treated as distinct genres, though often united in the same manuscript and page. The reign of the Ottomans in the 16th and early 17th centuries introduced the Turkish form of Islamic calligraphy. This art form reached the height of its popularity during the reign of Suleiman the Magnificent (1520–66). As decorative as it was communicative, Diwani was distinguished by the complexity of the line within the letter and the close juxtaposition of the letters within the word. The hilya is an illuminated sheet with Islamic calligraphy of a description of the Prophet Muhammad. The tughra is an elaborately stylized formal signature of the sultan, which like the hilya performed some of the functions of portraits in Christian Europe.

Other important media were in the applied or decorative arts rather than figurative work. Pottery, especially İznik pottery, hardstone carvings, Turkish carpets and textiles were all produced to extremely high standards, and carpets in particular were exported widely. Other Turkish art ranges from metalwork, carved woodwork and furniture with elaborate inlays to traditional Ebru or paper marbling.

In the 19th century Turkish art and architecture became more heavily influenced by contemporary European styles, leading to over-elaborated and fussy detail in decoration. European-style painting was slow to be adopted, with Osman Hamdi Bey (1842-1910) for long a somewhat solitary figure. He was a member of the Ottoman administrative elite who trained in Paris, and painted throughout his long career as a senior administrator and curator in Turkey. Many of his works represent Orientalism from the inside, as it were.

A transition from Islamic artistic traditions under the Ottoman Empire to a more secular, Western orientation has taken place in Turkey. Turkish painters today are striving to find their own art forms, free from Western influence. Sculpture is less developed, and public monuments are usually heroic representations of Atatürk and events from the war of independence. Literature is considered the most advanced of contemporary Turkish arts.

The tughra of Sultan Mahmud II. 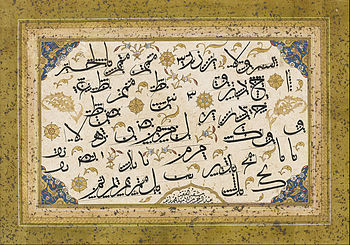