The Grand National Assembly of Turkey (Turkish: Türkiye Büyük Millet Meclisi), usually referred to simply as the TBMM or Parliament (Turkish: Meclis), is the unicameral Turkish legislature. It is the sole body given the legislative prerogatives by the Turkish Constitution. It was founded in Ankara on 23 April 1920 in the midst of the Turkish War of Independence. The parliament was fundamental in the efforts of Mustafa Kemal Atatürk and his colleagues to found a new state out of the remnants of the Ottoman Empire in the aftermath of World War I.

Turkey has had a history of parliamentary government before the establishment of the current national parliament. These include attempts at curbing absolute monarchy during the Ottoman Empire through constitutional monarchy, as well as establishments of caretaker national assemblies immediately prior to the declaration of the Republic of Turkey in 1923 but after the de facto dissolution of the Ottoman Empire earlier in the decade.

Parliamentary practice before the Republican era

There were two parliamentary governments during the Ottoman period in what is now Turkey. The First Constitutional Era lasted for only two years, elections being held only twice. After the first elections, there were a number of criticisms of the government due to the Russo-Turkish War, 1877–1878 by the representatives, and the assembly was dissolved and an election called on 28 June 1877. The second assembly was also dissolved by the sultan Abdülhamid II on 14 February 1878, the result being the return of absolute monarchy with Abdülhamid in power and the suspension of the Ottoman constitution of 1876, which had come with the democratic reforms resulting in the first constitutional era.

The Second Constitutional Era is considered to have begun on 23 July 1908. The constitution that was written for the first parliament included control of the sultan on the public and was removed during 1909, 1912, 1914 and 1916, in a session known as the "declaration of freedom". Most of the modern parliamentary rights that were not granted in the first constitution were granted, such as the abolition of the right of the Sultan to deport citizens that were claimed to have committed harmful activities, the establishment of a free press, a ban on censorship. Freedom to hold meetings and establish political parties was recognized, and the government was held responsible to the assembly, not to the sultan.

Establishment of the national Parliament

President Atatürk and his colleagues leaving the building of the Grand National Assembly of Turkey (today the Museum of the Republic) after a meeting for the seventh anniversary of the foundation of the Republic of Turkey (1930).
Main article: Establishment of Turkish national movement

After World War I, the victorious Allied Powers sought the dismemberment of the Ottoman Empire through the Treaty of Sèvres.[1] The political existence of the Turkish nation was to be completely eliminated under these plans, except for a small region. Nationalist Turkish sentiment rose in the Anatolian peninsula, engendering the establishment of the Turkish national movement. The political developments during this period have made a lasting impact which continues to affect the character of the Turkish nation. During the Turkish War of Independence, Mustafa Kemal put forth the notion that there would be only one way for the liberation of the Turkish people in the aftermath of World War I, namely, through the creation of an independent, sovereign Turkish state. The Sultanate was abolished by the newly founded parliament in 1922, paving the way for the formal proclamation of the republic that was to come on 29 October 1923.

Mustafa Kemal, in a speech he made on 19 March 1920 announced that "an Assembly will be gathered in Ankara that will possess extraordinary powers" and communicated how the members who would participate in the assembly would be elected and the need to realise elections, at the latest, within 15 days. He also stated that the members of the dispersed Ottoman Chamber of Deputies could also participate in the assembly in Ankara, to increase the representative power of the parliament. These elections were held as planned, in the style of the elections of the preceding Chamber of Deputies, in order to select the first members of the new Turkish assembly. This Grand National Assembly, established on national sovereignty, held its inaugural session on 23 April 1920. From this date until the end of the Turkish War of Independence in 1923, the provisional government of Turkey was known as the Government of the Grand National Assembly.

Main article: Single-party period of the Republic of Turkey 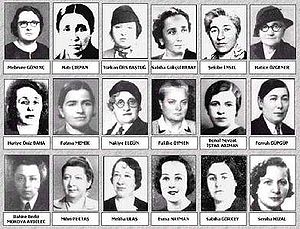 The first trial of multi-party politics, during the republican era, was made in 1924 by the establishment of the Terakkiperver Cumhuriyet Fırkası at the request of Mustafa Kemal, which was closed after several months. Following a 6-year one-party rule, after the foundation of the Serbest Fırka (Liberal Party) by Ali Fethi Okyar, again at the request of Mustafa Kemal, in 1930, some violent disorders took place, especially in the eastern parts of the country. The Liberal Party was dissolved on 17 November 1930 and no further attempt at a multiparty democracy was made until 1945.

Main article: Multi-party period of the Republic of Turkey

The multi-party period in Turkey was resumed by the founding of the National Development Party (Milli Kalkınma Partisi), by Nuri Demirağ, in 1945. The Democrat Party was established the following year, and won the general elections of 1950; one of its leaders, Celal Bayar, becoming President of the Republic and another, Adnan Menderes, Prime Minister.

Under the constitution of 1961, the Grand National Assembly was a bicameral parliament with over 600 members, the newly established upper house being the Senate of the Republic.

Following the 1980 military coup, the Senate was dissolved and the Turkish parliament again became unicameral under the current constitution approved in a national referendum in 1982.

There are 550 members of parliament (deputies) who are elected for a four-year term by the D'Hondt method, a party-list proportional representation system, from 85 electoral districts which represent the 81 administrative provinces of Turkey (Istanbul is divided into three electoral districts whereas Ankara and İzmir are divided into two each because of their large populations). To avoid a hung parliament and its excessive political fragmentation,[citation needed] a party must win at least 10% of the national vote to qualify for representation in the parliament. As a result of this threshold, only two parties won seats in the legislature after the 2002 elections and three in 2007. The 2002 elections saw every party represented in the previous parliament ejected from the chamber.[2] This rather high threshold has been internationally criticised, but a complaint with the European Court for Human Rights was turned down. Independent candidates may also run[3] and can be elected without needing a threshold.[4]

Since the 2002 general elections, an absolute majority of the seats have been held by members of the Justice and Development Party (AK Party), which leads a single-party government.[5] In 2002, the Republican People's Party (CHP) was the only other party that succeeded in being represented in Parliament. At the 2007 general elections, three parties managed to clear the 10% threshold — AK Party, CHP, and the Nationalist Movement Party (MHP). Furthermore, Kurdish politicians from the Democratic Society Party (DTP) circumvented the threshold by contesting the election as independents; 24 of them were elected, enabling them to constitute their own faction in the Assembly. In 2015 no government has been established after June elections, were four parties entered Parliament.

Speaker of the parliament 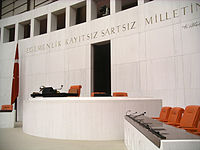 The chair of the Speaker of the Parliament.

A new term in the parliament began on June 23, 2015, after the June 2015 General Elections. Deniz Baykal from the CHP temporarily served as the speaker, being the oldest member, until the election of İsmail Kahraman on 22 November 2015.[6]

These committees are one of auditing tools of the Parliament. The research can begin upon the demand of the Government, political party groups or min 20 MPs. The duty is assigned to a committee whose number of members, duration of work and location of work is determined by the proposal of the Parliamentary Speaker and the approval of the General Assembly.

These committees are established if any investigation demand re the PM and ministers occur and approved by the General Assembly through hidden voting.

An MP can attend more than one committee if s/he is not a member of Application Committee or Planning and Budgeting Committee. Members of those committees can not participate in any other committees. On the other hand, s/he does not have to work for a committee either. Number of members of each committee is determined by the proposal of the Advisory Council and the approval of the General Assembly.

Sub committees are established according to the issue that the committee receives. Only Public Enterprises (PEs) Committee has constant sub committees that are specifically responsible for a group of PEs.

Committee meetings are open to the MPs, the Ministers’ Board members and the Government representatives. The MPs and the Ministers’ Board members can talk in the committees but can not make amendments proposals or vote. Every MP can read the reports of the committees. NGOs can attend the committee meetings upon the invitation of the committee therefore volunteer individual or public participation is not available. Media, but not the visual media, can attend the meetings. The media representatives are usually the parliamentary staff of the media institutions. The committees can prevent the attendance of the media with a joint decision.