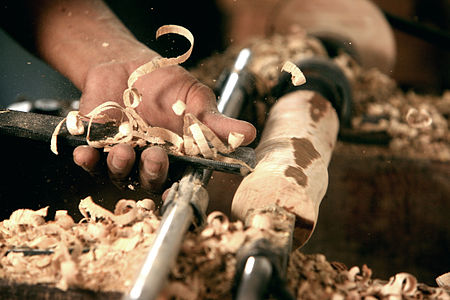 Detail of woodturning in work

There are two distinct methods of turning wood: spindle turning and bowl or faceplate turning. Their key difference is in the orientation of the wood grain, relative to the axis of the lathe. This variation in orientation changes the tools and techniques used. In spindle turning, the grain runs lengthways along the lathe bed, as if a log was mounted in the lathe. Grain is thus always perpendicular to the direction of rotation under the tool. In bowl turning, the grain runs at right angles to the axis, as if a plank were mounted across the chuck. When a bowl blank rotates, the angle that the grain makes with the cutting tool continually changes between the easy cuts of lengthways and downwards across the grain to two places per rotation where the tool is cutting across the grain and even upwards across it. This varying grain angle limits some of the tools that may be used and requires additional skill in order to cope with it.

In spindle turning, the wood is fixed between 2 points. The spur center digs into the wood and is powered by a motor. The other, a hard center or a live center may be a point or set of points in the tail-stock. In face plate turning, the wood is secured with screws to a faceplate or in a chuck or jig. the tail stock and a center may also be used for added support on large pieces with a faceplate. Most bowls, platters and many vessels are face plate turned, while pens, furniture legs, spindles, and some vessels are spindle turned. The method used may differ depending on the shape of the blank and the technique of the turner, and both methods may be used on the same piece.

When wood is cut in such a way that the fibre being cut is not supported by the fibre below it, it tends to separate and tear. This "tear out" exhibits a rough, highly damaged looking surface texture and greatly reduces the value of any product exhibiting it. The direction of cut is different in spindle turning and faceplate turning because cutting in the wrong direction can cause tear out. Spindle turning cuts are made from high points toward the axis on the outside of the piece, and from the axis toward the outside when hollowing. When faceplate turning, the opposite applies. 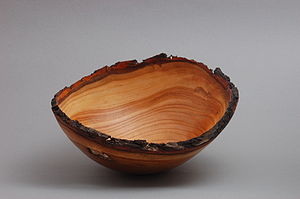 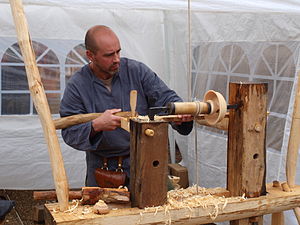 The origin of woodturning dates to around 1300 BC when the Egyptians first developed a two-person lathe. One person would turn the wood with a rope while the other used a sharp tool to cut shapes in the wood. The Romans improved the Egyptian design with the addition of a turning bow. Early bow lathes were also developed and used in Germany, France and Britain. Sometime after the turning bow was developed, a lathe was created that spun when a lever was pumped by hand. Early lathe workers would sometimes use their bare feet to hold cutting tools in place while using their hand to power the lathe. In the Middle Ages a pedal replaced hand-operated turning, freeing both the craftsman's hands to hold the woodturning tools. The pedal was usually connected to a pole, often a straight-grained sapling. The system today is called the "spring pole" lathe (see Polelathe). Spring pole lathes were in common use into the early 20th Century. Up to this point in history, the lathe operated in a reciprocal manner with the workpiece rotating back and forth as the drive mechanism reset to the loaded position in preparation for the next stroke. This required the turner to alternately apply the tool as the blank spun toward the operator and remove it from the blank as it spun away from him. A two-person lathe, called a "great lathe", allowed a piece to turn continuously (like today's power lathes). A master would cut the wood while an apprentice turned the crank on a huge wheel, often several feet in diameter. 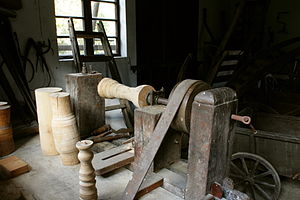 The term "bodger" stems from pole lathe turners who used to make the chair legs and spindles. A bodger would typically purchase all the trees on a plot of land, set up camp on the plot, and then fell the trees and turn the wood. Bodgers would set up their lathes in a stand of trees, cutting all of the trees around them. Once all the trees in the immediate vicinity were consumed, the bodger would move his lathe to a new spot within the same wood, to repeat the process. Interestingly, bodgers sometimes used lathes that did not have integral spring pole mechanisms, but rather placed their lathes under a standing tree with a springy branch that was suitable to use as the drive mechanism. This made for a more portable type of lathe for the bodger. The spindles and legs that were produced by the bodger were sold in bulk, for pence per dozen. The bodger's job was considered unfinished because he only made component parts. The term now describes a person who leaves a job unfinished, or does it badly. 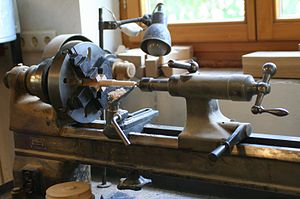 During the industrial revolution the lathe was motorized, allowing turned items to be created in less time. The motor also produced a greater rotational speed for the wood, making it easier to quickly produce high quality work. Today most commercial woodturning is done by computer-operated machinery allowing for mass-production that can be created with precision and without the cost of employing craftsmen. Despite this, there is still a demand for hand-turned products. Woodturning is also a hobby enjoyed by many people.

Modern professional woodturners are typically either "production" turners producing large quantities of functional pieces, or artistic turners producing smaller numbers of pieces, often enhanced after turning by carving, piercing, coloring, applying pyrography, gilding, or a number of other techniques to produce objects for the art market. From the 1930s, the field of wood turning grew from this hobbyist movement in the 1930s to fine artists in the 1970s, experimenting with super object forms and other fine craft concepts.[1] The Center for Art in Wood, founded in 1986 as The Wood Turning Center, houses a collection in Philadelphia with over 1,000 objects from international artists [2] as well as a research library and gallery.[3] 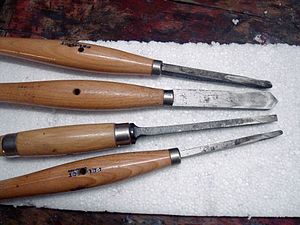 Turning tools are generally made from three different types of steel; Carbon steel, High speed steel (HSS), and more recently powdered metal. Comparing the three types, high speed steel tools maintain their edge longer, requiring less frequent sharpening than carbon steel, but not as long as powdered metal tools. The harder the type of high speed steel used, the longer the edge will maintain sharpness. Powdered steel is even harder than HSS, but takes more effort to obtain an edge as sharp as HSS, just as HSS is harder to get as sharp as Carbon Steel. 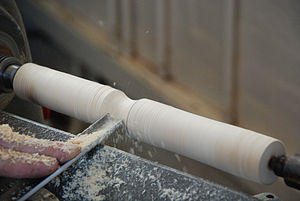 A gouge in use

Unlike other edged woodworking tools, woodturning tools require more frequent sharpening, because the wood passes at a great speed. To maintain a clean cut, the sharpness of the tools edge must be maintained. Sharpening is usually accomplished with the aid of mechanical devices such as powered sharpening wheels and abrasives. This sharpening process requires either skill of the craftsman, or one of the many available sharpening jigs, which facilitate maintaining a specific bevel on the tool. As with any mechanical sharpening method, overheating or blueing is a danger to be avoided as it will ruin the steel's temper, rendering the steel too soft to maintain a sharp edge. When this happens, the blued area must then be ground away to expose fresh steel and the tool must then have the bevel reestablished and the edge re-honed. High speed steel is not prone to blueing (overheating) whereas carbon steel blues easily, requiring frequent quenching in water or oil to avoid losing temper.

When woodturning, it is important to wear certain personal protective equipment (PPE). Loose clothing should not be worn, all jewellery should be removed, and long hair should be tied back. Wood shavings generated during turning will also need to be periodically removed.

A good way to check the safety before starting the lathe is 'SAFER':

Safe usage of a lathe also depends on the operator knowing proper techniques and being aware of the limitations of both the machine and the workpiece. For example, using a high spindle speed with an unbalanced workpiece may cause the lathe to vibrate dangerously. Spinning a large workpiece too fast may cause it to explode. Inappropriate use of tools such as gouges and skew chisels can cause a catch, where the tool bites suddenly and aggressively into the wood in an uncontrolled manner. This exerts very large forces on the workpiece, the tool, the lathe and the operator, often causing the workpiece to break apart or tear free from the lathe or pulling the tool out of the operator's hands and throwing it through the air.