From Infogalactic: the planetary knowledge core
(Redirected from Turner Air Force Base)
Jump to: navigation, search

Naval Air Station Albany (Turner Field) is a former United States Navy station whose site is located within the current city limits of Albany, Georgia. From 1940 to 1967, it was operated by the United States Army and USAF, finally under the name Turner Air Force Base. Following its closure it was transferred to the U.S. Navy and renamed NAS Albany. It continued to serve as an active USN installation until its closure in July 1974.[1] Most of the site was taken over as a brewery from 1978.

In the summer of 1940, Army Air Corps personnel from Maxwell Army Air Field in Montgomery, Alabama contacted the Albany Chamber of Commerce about the possibility of locating a training base at their community with the stipulation that the local government purchase the property. Anticipating the economic benefit to the area, the local government accepted the proposal.

The Air Corps looked at several sites including the existing Albany Municipal Airport. The municipal airport eventually became the site of a primary Contract Pilot School (Albany Army Airfield). The Air Corps finally settled on a site four miles (6 km) northeast of town in Dougherty County. The Chamber of Commerce raised $95,000 to purchase over 4,700 acres (19 km2) for the main base and four auxiliary fields in Lee County. When the Army indicated it desired an additional 200 acres (0.81 km2) for the main base, the City purchased the property outright. All of the land was then leased to the Air Corps for $1 a year with a 99-year option.

Construction got under way on 25 March 1941 for the new training airfield. The immediate construction involved runways and airplane hangars, with three concrete runways, several taxiways and a large parking apron and a control tower. Several large hangars were also constructed. Buildings were ultimately utilitarian and quickly assembled. Most base buildings, not meant for long-term use, were constructed of temporary or semi-permanent materials. Although some hangars had steel frames and the occasional brick or tile brick building could be seen, most support buildings sat on concrete foundations but were of frame construction clad in little more than plywood and tarpaper.

Initially named the Albany Army Airfield, the base became Turner Army Airfield on 21 July 1941, in honor of Georgia native Lt. Sullivan Preston Turner, killed the year before as a result of a mid-air collision. It was activated on 12 August, although the base was far from complete. In addition to the main base, Turner AAF had the following satellite airfields: 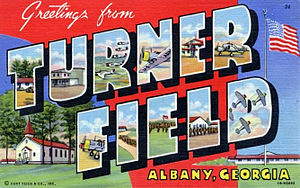 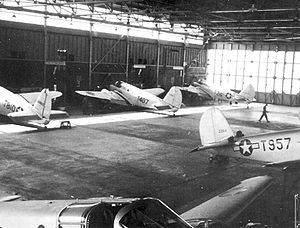 AT-10 trainers in a hangar at Turner AAF, about 1944. Note the "T" prefix on the fuselage, showing the aircraft were assigned to Turner Field 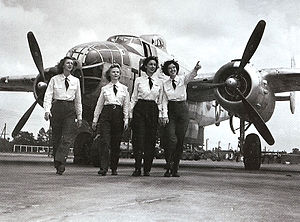 Turner was also used during World War II to train Free French and Royal Air Force aircrews. By June 1942 training of British students resumed. At the end of the year, aircraft complement numbered 33 Curtiss AT-9s, 80 Cessna AT-17s, nine AT-6 Texans, seven BT-13 Valiants, and a few miscellaneous types. In the fall of 1942, half the AT-9s were removed and replaced with the Cessna AT-17 "Bobcat". The AT-17 was a military version of Cessna Model T-50 with wooden wings, fabric covered steel tube fuselage, and fixed-pitch propellers. The AT-17 was described by pilots as having the characteristics of a twin-engine Cub. Although the AT-17 was one of the safest trainers, some instructors felt it lacked the performance to properly prepare students for the combat aircraft they would eventually fly.

To meet the Army's immediate need for two-engine trainers, Beech Aircraft designed the AT-10 Wichita in 1940, with economy and ease of manufacture in mind. The aircraft was made of wood with the exception of the engine cowls and the cockpit enclosure. Even the fuel tanks were wood with a covering of neoprene rubber. The use of wood allowed Beech to subcontract the manufacture of many components to furniture manufacturers and other firms. The wooden construction resulted in a light aircraft with excellent performance – as long as both engines were running. Part of the AT-10's economy was achieved by providing the aircraft with propellers that could not be feathered. Therefore, if an AT-10 lost an engine, sustained flight depended on the temperature and aircraft weight. When an AT-10 peeled off from a formation flight at Moody and entered a high-speed dive, the fabric tore off the flight controls and the aircraft crashed, killing the pilots. Thereafter, the AT-10 was red-lined at 180 mph (290 km/h).

Turner was inactivated on 15 August 1946. Although inactive, Turner Field was under the control of the 2621st AAF Base Unit arrived from Barksdale Field, Louisiana which acted as a caretaker unit. The airfield remained under the overall control of Army Air Force Training Command. 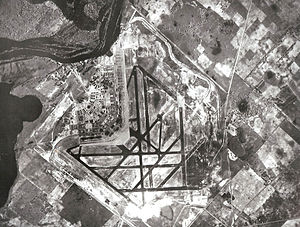 Turner Air Force Base, about 1947 or 1948, still largely in its World War II configuration with seven runways.

Turner Army Airfield was reactivated on 1 April 1947 and assigned to the Tactical Air Command's Ninth Air Force. A major renovation project was required to upgrade the temporary wooden facilities from its World War II configuration into a permanent Air Force Base, involving the construction of concrete and brick buildings, along with rebuilding the runway to accommodate jet aircraft. On 1 July 1948, the airfield was renamed Turner Air Force Base, as a result of the United States Air Force becoming a separate uniformed service.

The 31st Fighter Wing was transferred without personnel or equipment to Turner on 4 September 1947 from Langley Field, Virginia. Initially flying North American P-51D (later F-51D) Mustangs, the wing trained to achieve tactical proficiency. In 1948, after the jet runway was completed at Turner, the wing was upgraded to the Republic F-84 Thunderjet. 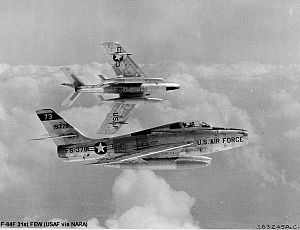 The 31st was re-designated as the 31st Fighter-Bomber Wing on 20 January 1950 upon joining Strategic Air Command's Second Air Force and subsequently the 31st Fighter-Escort Wing on 16 July 1950, reflecting the Wing's new mission to escort SAC's intercontinental Boeing B-29 and Boeing B-50 Stratofortress bomber fleet.

Beginning in December 1950 through July 1951, all tactical and most support components deployed to England. Thereafter it deployed to provide air defense in Japan during the Korean War from July–October 1952 and November 1953 – February 1954. The 31st FEW earned an Air Force Outstanding Unit Award for making the first massed jet fighter crossing of the Pacific Ocean in July 1952. The wing was again redesignated as the 31st Strategic Fighter Wing on 20 January 1953, as the escort mission within SAC became deemphasized.

On 1 April 1957 the 31st was transferred to Tactical Air Command at Turner and was redesignated as the 31st Fighter-Bomber Wing when re-equipped with the new North American F-100 Super Sabre aircraft. The wing rotated tactical components to Alaska in 1956 and 1957 and to Europe in 1958 and 1959. It became non-operational at Turner on 15 March 1959 and was transferred to George Air Force Base, California.

A major expansion of the base in preparation for the arrival of B-52 bombers resulted in the airfield at Turner AFB being greatly expanded into a configuration that was typical of a Strategic Air Command (SAC) B-52 base: a single 12,000-foot runway with a parallel taxiway; an Alert Site near the runway that contained parking for armed bombers and supporting tanker, as well as billeting and messing facilities for flight crews sitting 24-hour alert duty for up to a week at a time, and a huge aircraft parking ramp area for those aircraft not on alert.

Turner AFB subsequently became the home of the SAC's 4080th Strategic Reconnaissance Wing in 1957, resulting in extensive expansion of the primary runway & other facilities. Upon transfer of the 4080 SRW to Laughlin AFB, TX in 1957, SAC established the 4138th Strategic Wing as the primary entity at Turner, operating B-52D Stratofortress and KC-135A Stratotanker aircraft. On 1 January 1959 SAC headquartered Eighth Air Force's 822d Air Division at Turner.

On 1 February 1963, the 4138 SW was discontinued and all personnel and B-52D and KC-135A aircraft assets transferred to the newly established 484th Bombardment Wing (Heavy). The 484 BW continued to maintain CONUS-based strategic nuclear alert responsibilities at Turner through the 1960s and deployed to Southeast Asia for most of 1966.

Turner began phasing down in 1966 in preparation for its transfer to the United States Navy when the 822d Air Division was inactivated on 2 September. The 484th BW was inactivated on 25 March 1967, and its aircraft assets were redistributed to other SAC units.[2]

Reconnaissance Attack Wing ONE (RECONATKWING ONE) 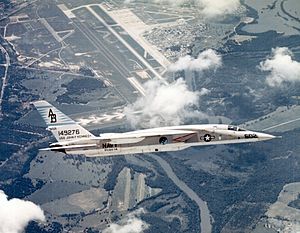 Turner AFB was closed by the Air Force in 1967 and was turned over to the United States Navy. It then became Naval Air Station Albany (Turner Field) and housed eleven squadrons of the Navy's Reconnaissance Attack Wing 1 (RECONATKWING ONE), operating the Mach 2+ RA-5C Vigilante carrier-based reconnaissance aircraft, the wing and squadrons relocating during 1967–1968 from the then-closing Naval Air Station Sanford, Florida. Additional Navy aircraft based at NAS Albany during this period included the TA-4F/TA-4J Skyhawk II and the TA-3B Skywarrior.

RECONATKWING ONE consisted of one Reconnaissance Attack Squadron that served as the sole Fleet Replacement Squadron (FRS) for the RA-5C, and ten operational Reconnaissance Attack Squadrons that would deploy with Carrier Air Wings aboard Forrestal and Kitty Hawk class aircraft carriers, and the USS Enterprise (CVN-65). The Fleet Replacement Squadron, Reconnaissance Attack Squadron 3 (RVAH-3), utilized the TA-4F, TA-4J, TA-3B and RA-5C to train pilots, naval flight officers and maintenance personnel to fly and maintain the Vigilante, while the other squadrons (RVAH-1, RVAH-5, RVAH-6, RVAH-7, RVAH-9, RVAH-11, RVAH-12, RVAH-13 and RVAH-14) deployed aboard carriers to the Atlantic, Pacific and Mediterranean. Several of the RVAH squadrons during this period deployed with their carriers to Yankee Station for combat operations during the Vietnam War. Several flight crews were killed in combat during this period while other pilots and naval flight officers were shot down and captured as prisoners of war until being repatriated in early 1973.

NAS Albany/Turner Field was closed by the Navy in 1974, and its RA-5C Vigilante wing and squadrons were transferred to NAS Key West, Florida. The property was returned to the city. At the time of its closure, the NAS Albany airfield consisted of a single runway (12,050 feet long x 300 feet wide), taxiways, a large ramp area, and numerous hangars & buildings.

After its closure by the Navy, Turner was briefly reused for civil flying and a tenant Georgia Army National Guard aviation unit, with the nearby Ayres aircraft manufacturing company using the field to train pilots for their crop-duster aircraft.

Following its closure, the site was actively marketed for economic redevelopment by city officials. They were rewarded by the selection in 1978 of the ex-Turner AFB/NAS Albany site by the Miller Brewing Company, which built an extensive brewery operation at the location, almost completely obliterating any trace of the former 12,050-foot runway and associated aircraft ramp facilities.

A large part of the base still exists. The brewery effectively took the site from the runways east, but most of the base remains intact, including multiple buildings, hangars, much of the signage, along with many guard and utility shacks around the perimeter. Western concrete ramps are still there, as is much of the leftover hardware. The original perimeter chainlink fence is still up, and there are still signs warning against photography without permission of the commander. The site is now home to a U.S. Department of Labor Job Corps center.