The Turonian is, in the ICS' geologic timescale, the second age in the Late Cretaceous epoch, or a stage in the Upper Cretaceous series. It spans the time between 93.9 ± 0.8 Ma and 89.8 ± 1 Ma (million years ago). The Turonian is preceded by the Cenomanian stage and underlies the Coniacian stage.[1]

At the beginning of the Turonian an anoxic event took place which is called the Cenomanian-Turonian boundary event or the "Bonarelli Event". 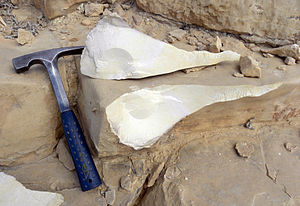 The Turonian (French: Turonien) was definied by the French paleontologist Alcide d'Orbigny (1802–1857) in 1842. Orbigny named it after the French city of Tours in the region of Touraine (department Indre-et-Loire), which is the original type locality.

The base of the Turonian stage is defined as the place where the ammonite species Wutinoceras devonense first appears in the stratigraphic column. The official reference profile (the GSSP) for the base of the Turonian is located in the Rock Canyon anticline near Pueblo, Colorado (USA, coordinates: 38° 16' 56" N, 104° 43' 39" W).[2]

The top of the Turonian stage (the base of the Coniacian) is defined as the place in the stratigraphic column where the inoceramid bivalve species Cremnoceramus rotundatus first appears.

The Turonian is sometimes subdivided in Lower/Early, Middle and Upper/Late substages or subages. In the Tethys domain, it contains the following ammonite biozones:

Other important index fossils are species of the inoceramid genus Inoceramus (I. schloenbachi, I. lamarcki and I. labiatus). Inoceramids are bivalve Mollusca related to today's mussels.