Exhibitions of artifacts from the tomb of Tutankhamun

The gilded bier from the base of Tutankhamun's Sarcophagus. 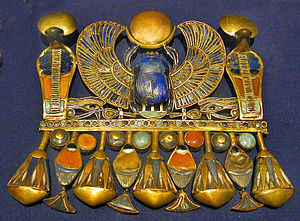 A pectoral belonging to Tutankhamun, representing his Prenomen.

Exhibitions of artifacts from the tomb of Tutankhamun, in both permanent and traveling displays, have appeared in museums across several countries, notably the Soviet Union, United States and the United Kingdom. The artifacts had sparked a furor of interest in ancient Egypt with their discovery in 1922, but most of them remained in the Cairo Museum until the 1960s, when they began to be exhibited abroad.[1] Because of these exhibitions, relics from the tomb of the Egyptian pharaoh Tutankhamun are among the most travelled artifacts in the world. Probably the best-known exhibition tour was The Treasures of Tutankhamun tour, which ran from 1972 to 1981. Other exhibitions have included Tutankhamun Treasures in 1961 and 1967, Tutankhamen: The Golden Hereafter beginning in 2004, Tutankhamun and the Golden Age of the Pharaohs beginning in 2005, and Tutankhamun: The Golden King and the Great Pharaohs in 2008. Standing exhibitions include the Tutankhamun Exhibition in Dorchester, England, that contains exact replicas of many of the artifacts. 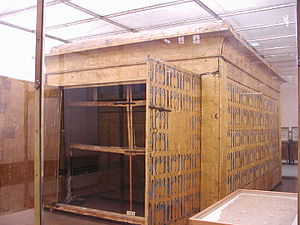 One of the golden shrines, now on display in the Egyptian Museum.

All of the artifacts exhumed from the Tutankhamun tomb are, by international convention, considered property of the Egyptian government.[2] Consequently, these pieces are normally kept at the Egyptian Museum in Cairo; the only way for them to be shown internationally is by approval of Egyptian authorities. Although journalists and government officials generally support the tours, some Egyptians argue that the artifacts should remain on display in their own country, where Egyptian school-children would have greater access to them, and where the museum's exhibit would attract foreign tourists.[3]

The first travelling exhibition of a substantial number of Tutankhamun artifacts took place from 1961 to 1966. The exhibition, titled Tutankhamun Treasures, initially featured 34 smaller pieces made of gold, alabaster, glass, and similar materials.[4] The portions of the exhibition occurring in the United States were arranged by the Smithsonian Institution and organized by Dr. Froelich Rainey, Director of the University of Pennsylvania Museum of Archaeology and Anthropology, with the assistance of Dr. Sarwat Okasha, Minister of Culture and National Guidance of the United Arab Republic.[4] The exhibit travelled to 18 cities in the United States and six in Canada.[3]

The exhibition had a public purpose in mind, to "stimulate public interest in the UNESCO-sponsored salvage program for Nubian monuments threatened by the Aswan Dam project".[4][5] The exhibition opened in November 1961 at the Smithsonian's National Gallery of Art, in Washington, D.C.[4]

Other museums to host the exhibition

The exhibition was shown in eighteen cities in the United States, and in six cities in Canada, including Montreal, and Ottawa.[3] Other stops on the tour included:

The French exhibit saw an attendance of 1,240,975 (It was titled Tutankhamun and His Time and had 45 pieces on display) 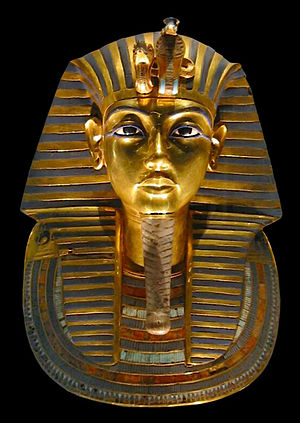 The genesis of the Treasures of Tutankhamun exhibition reflected the changing dynamic of Middle-East relations. It was first shown in London at the British Museum from March 30 until December 30, 1972. More than 1.6 million visitors came to see the exhibition, some queuing for up to eight hours, and it was the most popular exhibition in the Museum's history.[9] The exhibition moved on to other countries, including the USSR, United States, Canada, and West Germany. Egyptian cultural officials initially stalled prospects of an American tour, as Egypt was then more closely aligned with the Soviet Union, where fifty pieces had toured in 1973.[1] However, relations thawed later that year when the U.S. interceded on Egypt's behalf to prevent the total destruction of Egypt's Third Army during a military conflict with Israel.[1] U.S. president Richard Nixon thereafter visited Egypt, becoming the first American President to do so since the Second World War, and personally prevailed upon Egyptian president Anwar Sadat to permit the artifacts to tour the United States – with the U.S. tour including one more city than the Soviet tour had included, and several additional pieces.[1] The showing was the largest of Tutankhamun's artifacts, with 53 pieces.[3] The Metropolitan Museum of Art organized the U.S. exhibition, which ran from November 17, 1976, through September 30, 1979. More than eight million attended.[10] The Metropolitan's exhibition was designed to recreate for visitors the drama of the 1922 discovery of the treasure-filled tomb. Included along with original objects excavated from the tomb were reprints from glass plate negatives in the Metropolitan’s collection of the expedition photographer Harry Burton's photographs documenting the excavation's discoveries step by step.[11] The Smithsonian described the exhibit as one of the initial "blockbuster exhibits" which sparked the museum community's interest in such exhibitions.[12]

After the six U.S. tour locations were named, San Francisco citizens bombarded the Mayor's Office with inquiries as to why the tour was not coming there. As a result, museum trustees flew to Egypt to meet with the Egyptian Museum in Cairo, where they worked out a mutual agreement for a seventh stop. Profits after exhibition expenses resulted in $10+ million going to the Egyptian Museum for refurbishing.[13]

Other museums to host the exhibition

During the years 1976 to 1979 the exhibition was shown in the United States. While at the following venues, the exhibit attracted more than eight million visitors: (NGA)

After the Exhibit left the U.S. it went to:

While the exhibition was on display in San Francisco, Police Lieutenant George E. LaBrash suffered a minor stroke as he guarded the treasures after hours. He later filed a lawsuit against the city on the theory that his injury had resulted from the legendary Curse of the pharaohs.[15]

Originally entitled Tutankhamen: The Golden Hereafter, this exhibition is made up of fifty artifacts from Tutenkhamun's tomb as well as seventy funerary goods from other 18th Dynasty tombs. The tour of the exhibition began in 2004 in Basel, Switzerland and went to Bonn, Germany on the second leg. The European tour was organized by the Art and Exhibition Hall of the Federal Republic of Germany, the Supreme Council of Antiquities (SCA), and the Egyptian Museum in cooperation with the Antikenmuseum Basel and Sammlung Ludwig. Deutsche Telekom sponsored the Bonn exhibition.[16]

Tutankhamun and the Golden Age of the Pharaohs consists of the same items from the Germany and Switzerland tour but in a slightly different exhibition. Of the 50 artifacts from the Tutankhamun tomb fewer than ten were repeated from the 1970s exhibition. This exhibition began in 2005, and was directed by Egypt's Supreme Council of Antiquities, together with Arts and Exhibitions International and the National Geographic Society.[17]

The initial American leg of the Tutankhamun and the Golden Age of the Pharaohs exhibition attracted estimated three million visitors, and was displayed in the following venues:

In 2011 the exhibition visited Australia for the first time, opening at the Melbourne Museum in April for its only Australian stop where it achieved the highest touring exhibition box office numbers in the country's history before Egypt's treasures return to Cairo in December 2011.[18][19][20]

Tutankhamun and the Golden Age of the Pharaohs displays actual items excavated from tombs of ancient Egyptian Pharaohs. From 130 authentic artifacts presented, 50 were found specifically during the excavations of Tutankhamun's tomb. The exhibition includes 80 exhibits from the reigns of Tutankhamun's immediate predecessors in the Eighteenth dynasty, such as Hatshepsut, whose trade policies greatly increased the wealth of that dynasty and enabled the lavish wealth of Tutankhamun's burial artifacts. Other items were taken from other royal graves of the 18th Dynasty (dating 1555 BCE to 1305 BCE) spanning Pharaohs Amenhotep II, Amenhotep III and Thutmose IV, among others. Items from the largely intact tomb of Yuya and Tjuyu (King Tut's great-grandparents; the parents of Tiye who was the Great Royal Wife of the Egyptian pharaoh Amenhotep III) are also included. Yuya and Tjuyu's tomb was one of the most celebrated historical finds in the Valley of the Kings until Howard Carter's discovery in 1922. This exhibition does not include either the gold death mask that was a popular exhibit from The Treasures of Tutankhamun exhibition, or the mummy itself. The Egyptian Government has determined that these artifacts are too fragile to withstand travel, and thus they will permanently remain in Egypt.[21] The mummy of Tutankhamun is the only known mummy in the Valley Of The Kings to still lie in its original tomb, KV62.

Tutankhamun and the Golden Age of the Pharaohs was expected to draw more than three million people.[17] The exhibition started in Los Angeles, California, then moved to Fort Lauderdale, Florida, Chicago and Philadelphia. The exhibition then moved to London[22] before finally returning to Egypt in August 2008. Subsequent events have propelled an encore of the exhibition in the United States, beginning with the Dallas Museum of Art in October 2008 which hosted the exhibition until May 2009.[23] The tour continued to other U.S. cities.[24] After Dallas the exhibition moved to the de Young Museum in San Francisco, to be followed by the Discovery Times Square Exposition in New York City.[25]

This exhibition, featuring completely different artifacts to those in Tutankhamun and the Golden Age of the Pharaohs, first ran at the Ethnological Museum in Vienna from March 9 to September 28, 2008 under the title Tutankhamun and the World of the Pharaohs. It featured a further 140 treasures from the Valley of the Kings including objects from the tomb of King Tut. The exhibition continued with the following itinerary:

Several exhibitions have been established which feature replicas of Tutankhamun artifacts, rather than real artifacts from archaeological sites.[3] These provide access to pieces of comparable appearance to viewers living in places where the real artifacts have not circulated. The first replica exhibition, a copy of the entire tomb of Tutankhamun, was built only a few years after the discovery of the tomb. This replica was temporary, staged by Arthur Weigall for the British Empire Exhibition at Wembley, in 1924.[3] Modern replica exhibitions exist in Dorchester, Dorset, England, in Las Vegas, Nevada, United States, and even in Cairo, Egypt (where the replica exhibition is intended to reduce the overwhelming traffic to the real locations).[3] A travelling exhibition of replicas titled Tutankhamun: His Tomb and Treasures, featuring several hundred pieces, has been shown in Zürich, Brno, Munich, and Barcelona.[3]

The Tutankhamun Exhibition in Dorchester, Dorset, England, is a permanent exhibition set up in 1986 by Michael Ridley as a re-creation of the tomb of the ancient Egyptian Pharaoh Tutankhamun. The exhibition does not display any of the actual treasures of Tutankhamun, but all artifacts are recreated to be exact facsimiles of the actual items. Original materials have been used where possible, including gold. The story line is based around the famous English archaeologist Howard Carter. The Exhibition reveals history from Carter's point of view as he entered the tomb in Valley of the Kings in November 1922.

The Discovering Tutankhamun exhibition at the Ashmolean Museum in Oxford, England, is a temporary exhibition, open from July until November 2014, exploring Howard Carter’s excavation of the tomb of Tutankhamun in 1922. Original records, drawings and photographs from the Griffith Institute are on display.[27] The complete records of the ten year excavation of the tomb of Tutankhamun were deposited in the Griffith Institute Archive at the University of Oxford shortly after Carter's death.[28] A replica death mask is displayed along with replicas of other items from the tomb.