Tuxedo Park is a village in Orange County, New York, United States. The population was 623 at the 2010 census. It is part of the Poughkeepsie–Newburgh–Middletown, NY, Metropolitan Statistical Area as well as the larger New York–Newark–Bridgeport, NY-NJ-CT-PA Combined Statistical Area. The name is derived from a Native American word of the Lenape language, tucsedo or p'tuxseepu, which is said to mean "crooked water"[2] or "crooked river."[3]

Tuxedo Park is a village within the southern part of the town of Tuxedo, near New York Route 17 and the New York State Thruway.

The park is located in the Ramapo Mountains. In the colonial era, it acquired a reputation for undeveloped iron deposits. In consequence, a company formed in England and headed by William Alexander, Lord Stirling, acquired a large tract in the neighborhood. The company built furnaces near Ringwood and opened mines on the Ramapo River near Sterling Lake. Pierre Lorillard II acquired the company and its land holdings in 1790. Once the iron deposits were depleted, the land was used for lumbering.

What is now the village and the areas immediately surrounding it were first developed as a private hunting-and-fishing reserve by Pierre Lorillard IV in 1885. At that time it became known as Tuxedo Park. Lorillard IV initially built small cottages, renting or selling them to his friends and family. The project grew so popular that he organized the Tuxedo Club and the Tuxedo Park Association, and surrounded the property with a high game fence. This fence fairly accurately marked the present boundaries of the area restricted to use of the residents of Tuxedo Park. In 1924 the Tuxedo Securities Corporation acquired from the Estate of Peter Lorillard, deceased, all of the stock of the Tuxedo Park Association. 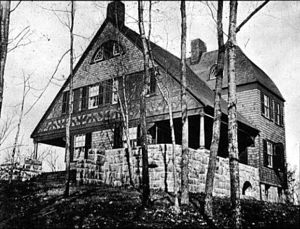 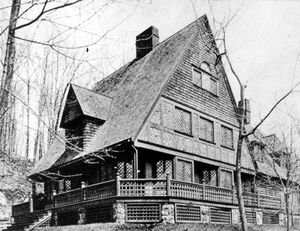 The original clubhouse, designed by Bruce Price, was built in 1886 and was then replaced by a second clubhouse in 1928, which was designed by John Russell Pope. This building was destroyed by fire in 1943, and was partially rebuilt soon thereafter.

Tuxedo Park enjoyed many prosperous years from 1885 until the 1920s. The "Blue Book of Etiquette" was written by Emily Post, who was the daughter of Bruce Price. She wrote the book based on what she observed inside the great stone gates of Tuxedo. Many other Tuxedo notables from that era include:

During the 1920s a new hospital and a high school were built through the generosity of a few Tuxedo Park residents, including John Insley Blair. In the years following the Great Depression, however, Tuxedo Park lost many of its socialites and wealthy inhabitants, but attracted a few new ones, as well. One of the new residences was built by Angier Biddle Duke, (cousin to Doris Duke), whose father-in-law, George Baker St. George, was an original resident of Tuxedo. Mr. St. George purchased and built Mr. Duke and his wife, Priscilla St George, a new estate, "Duck Hollow". Duck Hollow was the last built estate in Tuxedo Park by the old "Blue Blood Elite". While Mr. Duke & his wife were traveling abroad, as most elites did at that time, Mr. St. George had landscape architect Arthur P. Kroll landscape the elaborate property. By the time the Dukes returned from Europe, the property had been transformed and appeared to have been there for over 100 years.

The area known as Tuxedo Park separated from the Town of Tuxedo and became incorporated in 1952, adopting the village form of government. Today it comprises 2,050 acres (8.3 km2), of which 355 acres (1.44 km2) includes three lakes, and about 330 housing units in 340 structures. Other newer housing developments include the Southfields Apartments built in 1971 on the site of a former bed factory, the Mountain View Apartments near the Sloatsburg line, and the Woodlands in Eagle Valley.

The evening dress for men now popularly known as a tuxedo (sometimes formally termed black tie attire), takes its name from Tuxedo Park, where it was said to have been worn for the first time in the United States, by Griswold Lorillard at the annual Autumn Ball of the Tuxedo Club founded by Pierre Lorillard IV, and thereafter became popular for formal dress in America. It became known as the tuxedo when a fellow asked another at the Autumn Ball, "Why does that man's jacket not have coattails on it?" The other answered, "He is from Tuxedo." The first gentleman misinterpreted and told all of his friends that he saw a man wearing a jacket without coattails called a tuxedo, not from Tuxedo. This all took place at The Autumn ball, which still exists today.

In recognition of its historical and architectural significance, the historic district was listed as Tuxedo Park on the National Register of Historic Places on March 13, 1980.[1] In 1982 the designation was officially presented to Mrs. Joan Richardsson Alleman, Co-Chairman of the Tuxedo Conservation and Taxpayers Association, at the Washington's Headquarters State Historic Site in nearby Newburgh, NY. The designation was presented by Mr. Oren Lehman, Commissioner of Parks, Recreation, and Historic Preservation and is proudly displayed at the Tuxedo Park Village Office.

The village is located in Orange County near its border with Rockland County, New York and is in the Ramapo Mountains.

Located within the confines of the village are 3 lakes; Tuxedo Lake is the largest by far of the three and serves as the reservoir for the village's water needs, while the smaller Weewah Lake and Pond #2 serve as purely recreational bodies of water. No swimming or power-boating is allowed in Tuxedo Lake in order to retain optimal water quality.

There were 291 households out of which 29.6% had children under the age of 18 living with them, 63.9% were married couples living together, 8.9% had a female householder with no husband present, and 26.1% were non-families. 21.6% of all households were made up of individuals and 7.9% had someone living alone who was 65 years of age or older. The average household size was 2.51 and the average family size was 2.88.