From Infogalactic: the planetary knowledge core
Jump to: navigation, search
This article is about the Twelve-string guitar. For the similar instrument (Twelve-string tiple), see Colombian tiple.

This article is about guitars with 6 courses. For guitars with more than six separate strings, see extended-range classical guitar or ten-string guitar.

An acoustic 12-string guitar. The example shown is the Yamaha FG720S-12.

The twelve-string guitar is a steel-string guitar with twelve strings in six courses, which produces a richer, more ringing tone than a standard six-string guitar. The strings are generally arranged such that the first string of each pair to be struck on a downward strum is the higher octave string; however, Rickenbacker usually reverses this arrangement on its electric 360/12 model. The gap between the strings within each dual-string course is narrow, and the strings of each course are fretted and plucked as a single unit. The neck is wider, to accommodate the extra strings, and is similar to the width of a classical guitar neck. The sound, particularly on acoustical instruments, is fuller and more resonant than six-string instruments.

Twelve-string guitars are made in both acoustic and electric forms. However, it is the acoustic type that is most common. Some progressive rock (Alex Lifeson, Roger Hodgson), hard rock (Jimmy Page) and heavy metal (Dave Mustaine) musicians use double-necked guitars, which have both six-string and twelve-string components, allowing the guitarist easy transition between different sounds.

The double ranks of strings of the 12-string guitar produce a shimmering effect, due to the fact that even the strings tuned to unisons can never vibrate with precise simultaneity—that is they vibrate out of phase. The result to the ear is a sound that seems to "shimmer", which some describe as resembling strings that are slightly detuned. The interference between the out of phase vibrations produces a phenomenon known as a beat that results in a periodic rise and fall of intensity that is, in music, often considered pleasing to the ear. Pete Seeger described the distinctive sound of the 12-string guitar as "the clanging of bells".[1] The effect is more apparent when listening to notes that sustain for longer periods of time.

The exact origin of the modern twelve-string guitar is not certain;[2] however, the most likely ancestors that use courses of doubled strings are some Mexican instruments like the guitarra séptima, the guitarra quinta huapanguera, and the bajo sexto.[3] At the very end of the nineteenth century, the Archtop mandolin was one of the first instruments with courses of doubled strings designed in the United States.

The 19th and early 20th century twelve-strings were regarded as "novelty" instruments. It was not till the 1920s and the 1930s that the twelve-string guitar became a major part of blues and folk music, where their "larger than life"[3] sound made them ideal as solo accompaniment for vocalists, especially Lead Belly and Blind Willie McTell.[2] The twelve-string guitar has since occupied roles in certain varieties of folk, rock, jazz, and popular music. Lead Belly's protegé, Fred Gerlach, brought the instrument into the folk-music world, and his version of “Gallows Pole” inspired Led Zeppelin guitarist Jimmy Page both to cover the song and to adopt the instrument, bringing it into mainstream rock music. Initially, it was primarily used for accompaniment, owing to the greater difficulty of picking or executing string "bends" on the twelve-string guitar's double-strung courses. In the later 20th century, however, a number of players devoted themselves to producing solo performances on the twelve-string guitar.[4]

The strings are placed in courses of two strings each that are usually played together. The two strings in each of the lower four courses are normally tuned an octave apart, while each pair of strings in the top two courses are tuned in unison. The tuning of the second string in the third course (G) varies: some players use a unison string while others prefer the distinctive high-pitched, bell-like quality an octave string makes in this position. Another common variant is to tune the octave string in the sixth (lowest) course two octaves above the lower string, rather than one. Some players, either in search of distinctive tone or for ease of playing, will remove some doubled strings. For example, removing the higher octave from the three bass courses simplifies playing running bass lines, but keeps the extra treble strings for the full strums. Some manufacturers have produced nine-string instruments based on this setup, in which either the lower three courses are undoubled, or the upper three courses are undoubled.

The extra tension placed on the instrument by the doubled strings is high, and because of this, twelve-string guitars long had a reputation for warping after a few years of use (this is less of a problem in modern instruments, built after 1970). Until the invention of the truss rod in 1921, twelve-string guitars were frequently tuned lower than the traditional EADGBE to reduce the stresses on the instrument. Lead Belly often used a low C-tuning, but in some recordings his tunings can be recognized as low B and A-tunings.[5] Some twelve-string guitars have non-traditional structural supports to prevent or postpone warping, at the expense of appearance and tone.[citation needed] To further reduce the stress of the added string tension, twelve-string guitars built prior to 1970 typically had a shorter neck and fretboard than the six-string guitar, and the fret positions were more closely spaced as well. Its bridge had a larger reinforcement plate for the same reason.

Advances in materials, design, and construction techniques have rendered most of these accommodations moot in modern times, and contemporary 12-string guitars are commonly built to the same overt design and scale as their 6-string counterparts.

The most common tuning, considered standard today, is E3•E2 A3•A2 D4•D3 G4•G3 B3•B3 E4•E4, moving from lowest (6th) course to highest (1st) course. Lead Belly and some other players have doubled the lowest course two octaves above instead of one, producing a third string in unison with the top course.

Some performers prefer the richness of an open tuning due to its near-orchestral sound. The usual gamut of guitar tunings are also available. Some performers have experimented with tuning the two strings within a course to intervals other than octaves or unisons: jazz experimentalists such as Ralph Towner (of Oregon) Larry Coryell, and Philip Catherine have been known to tune bass courses to the upper fifths and trebles to the lower fourths instead of octaves and unisons,[6] Michael Gulezian tuned strings in the top two courses to whole-tone intervals (and possibly some of the other strings an octave lower) to achieve a very rich, complex sound.[7] The greater number of strings offers almost endless possibilities.

Nashville Tuning refers to a way of simulating a twelve-string guitar sound, using two six-string guitars playing in unison. This is achieved by replacing the lower four courses on one 6-string with the higher octave strings for those four courses from a 12-string set, and tuning these four strings an octave higher than normal tuning for those courses on a 6-string. Double-tracking this guitar with the standard-tuned 6-string is commonly used in recording studios to achieve a "cleaner" 12-string effect.[8]

The greater number of strings and higher cumulative string tension complicates playing, in both hands. Fretting chords requires greater force, and the width of the neck, and the added string tension makes soloing and string-bending challenging. The gap between the dual-string courses is usually narrower than that between the single-string courses of a conventional six-string guitar, so more precision is required with the pick or fingertip when not simply strumming chords. Consequently, the instrument is most commonly used for accompaniment, though a handful of players have taken the time to develop the 12-string guitar as a solo instrument. Flat-picking solos are more frequently seen with electric players, whereas a few acoustic players have developed very sophisticated fingerstyle techniques (Leo Kottke) and even applied classical playing techniques (Ralph Towner). 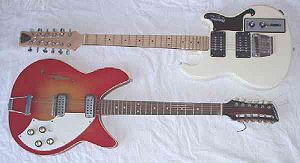 Performers who use acoustic 12-string guitars span a range of genres:

Numerous other musicians use it as their main instrument, including:

Bruce Springsteen has used a custom built 12-string Fender Stratocaster numerous times in concerts starting with the 2002 The Rising tour. Springsteen then used a 12-string guitar on the song "Surprise Surprise" on the album, Working on a Dream.

Most performers play the 12-string guitar as a rhythm instrument due to the addition of 6 more strings, 4 of which are an octave above the lower strings, the 6th, 5th, 4th, and 3rd strings. This creates the unique, full sound often heard by listeners that two guitars are being played and not just one. Leo Kottke and Guthrie Thomas are masters in the finger-picking style on the 12-string guitar, as each are capable of playing all 12 strings as individual strings.

In 1963 acoustic "folk" music was becoming more mainstream in the United States. One folk/blues/occasional jazz group, The Rooftop Singers, led by Erik Darling, formerly of The Weavers and an associate of Pete Seeger, recorded an old song "Walk Right In" which featured a strong opening "hook" played on the 12-string guitar. This song made it to the top of the pop charts and introduced millions to the 12-string sound.