In the ancient Greek religion and Greek mythology, the Twelve Olympians are the major deities of the Greek pantheon, commonly considered to be Zeus, Hera, Poseidon, Demeter, Athena, Apollo, Artemis, Ares, Aphrodite, Hephaestus, Hermes and either Hestia, or Dionysus.[1] Hades and Persephone were sometimes included as part of the twelve Olympians (primarily due to the influence of the Eleusinian Mysteries), although in general Hades was excluded, because he resided permanently in the underworld and never visited Olympus.

The Twelve Olympians, also known as the Dodekatheon (Greek: Δωδεκάθεον，δώδεκα,[3][4] dōdeka, "twelve" and θεοί, theoi, "gods"), were the principal deities of the Greek pantheon, said to reside atop Mount Olympus. The Olympians gained their supremacy in a war of gods in which Zeus led his siblings to victory over the Titans.

The concept of the "Twelve Gods" is older than any extant Greek or Roman sources.[5] The gods meet in council in the Homeric epics, but the first ancient reference to religious ceremonies for the Olympians collectively is found in the Homeric Hymn to Hermes. The Greek cult of the Twelve Olympians can be traced to 6th-century BC Athens and probably has no precedent in the Mycenaean period. The Altar of the Twelve Gods at Athens is usually dated to the archonship of the younger Pesistratos, in 522/521 BC.

In ancient Greek religion, the "Olympian Gods" and the "Cults of Twelve Gods" were often relatively distinct concepts.[6]

While the number was fixed at twelve,[7] there was considerable variation as to which deities were included.[8] However, the twelve as most commonly portrayed in art and poetry were Zeus, Hera, Poseidon, Demeter, Athena, Apollo, Artemis, Ares, Aphrodite, Hephaestus, Hermes and either Hestia, or Dionysus.

Hades, known in the Eleusinian tradition as Pluto, was not usually included among the Olympians because his realm was the underworld. Plato connected the Twelve Olympians with the twelve months, and implies that he considered Pluto one of the twelve in proposing that the final month be devoted to him and the spirits of the dead.[9][10] In Phaedrus, Plato seems to exclude Hestia from the rank of "the twelve great gods".[11]

At Olympia there were six altars dedicated to six pairs of gods: Zeus and Poseidon, Hera and Athena, Hermes and Apollo, the Charites and Dionysus, Artemis and Alpheus, and Cronus and Rhea.[12] The historian Herodotus states that Heracles was included as one of the Twelve by some.[13] At Kos, Heracles and Dionysus are added to the Twelve, and Ares and Hephaestus are not.[14] For Pindar,[15] the Bibliotheca, and Herodorus, Heracles is not one of the Twelve Gods, but the one who established their cult.[4] Lucian (2nd century AD) includes Heracles and Asclepius as members of the Twelve, without explaining which two had to give way for them.

Hebe, Helios, Selene, Eos, Eros and Persephone are other important gods and goddesses who are sometimes included in a group of twelve.[citation needed] Eros is often depicted alongside the other twelve, especially his mother Aphrodite, but not usually counted in their number.

The Roman poet Ennius gives the Roman equivalents (the Dii Consentes) as six male-female complements,[10] preserving the place of Vesta (Greek Hestia), who played a crucial role in Roman religion as a state goddess maintained by the Vestals.

Most listings include either one or the other of the following deities as one of the twelve Olympians.

The following gods and goddess are sometimes included as one of the twelve Olympians. 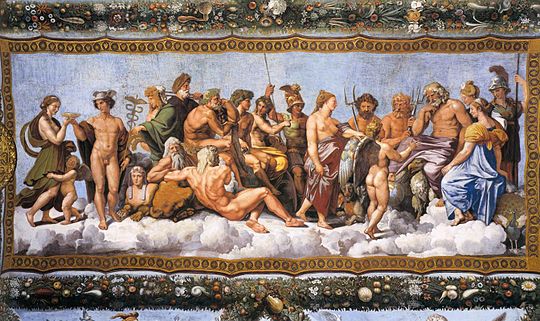 Assembly of twenty gods, predominantly the Twelve Olympians, as they receive Psyche (Loggia di Psiche, 1518–19, by Raphael and his school, at the Villa Farnesina)

The following gods and goddesses were not usually counted as Olympians, although they had close ties to them.