Section 2. The Congress shall assemble at least once in every year, and such meeting shall begin at noon on the 3d day of January, unless they shall by law appoint a different day.

Section 5. Sections 1 and 2 shall take effect on the 15th day of October following the ratification of this article.

Section 6. This article shall be inoperative unless it shall have been ratified as an amendment to the Constitution by the legislatures of three-fourths of the several States within seven years from the date of its submission. 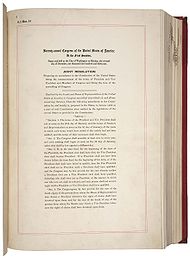 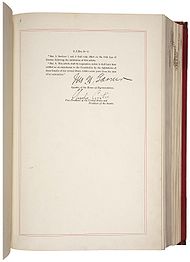 Before the Twentieth Amendment, the starting and ending of terms of office of federal elected officials, and when sessions of Congress began and ended, were set by a sometimes awkward intersection of law, historical precedent, and constitutional mandate. The Constitution did not set any dates for Congressional or presidential elections, nor for the commencement of terms of office for elected federal officials; the only specific date given was in Article I, Section 4, Clause 2, which stated that Congress was required to convene at least once each year, on the first Monday in December, though Congress could by law set another date and the president could summon special sessions.

In September of 1788, after the necessary nine states had ratified the Constitution, the Congress of the Confederation set March 4, 1789, as the date "for commencing proceedings" of the newly reorganized government. Despite the fact that the new Congress and presidential administration did not begin operation until April, March 4 was deemed to be the beginning of the newly elected officials' terms of office, and thus of the terms of their successors.[2] By the time of the second presidential election in 1792, Congress had passed a law requiring presidential electors to be chosen during November or early December,[3] which was narrowed to a single day in early November by 1845;[4] Congressional elections were generally held on the same day.

The upshot of these scheduling decisions was that there was a long four month lame duck period between the election of the president and his inauguration. For Congress, the situation was perhaps even more awkward. Because Article I, Section 4, Clause 2 mandated a Congressional meeting every December, after the election but before the Congressional terms of office had expired, a lame duck session was required by the Constitution in even-numbered years; the next session wasn't required until the next December, meaning that new members of Congress might not begin their work until more than a year after they were elected. Special sessions sometimes met earlier in the year, but this never became a regular practice, despite the Constitution allowing for it. In practice, Congress usually met in a long session beginning in Decembers of odd-numbered years, and in a short lame duck session in December of even-numbered years.[5]

The long lame duck period might have been a practical necessity at the end of the 18th century, when any newly elected official might require several months to put his affairs in order and then undertake an arduous journey from his home to the national capital, but it eventually had the effect of impeding the functioning of government in the modern age. From the early 19th century onward, it also meant that a lame duck Congress and presidential administration would fail to adequately respond to a significant national crisis in a timely manner. Each institution could do this on the theory that at best, a lame duck Congress or administration had neither the time nor the mandate to tackle problems, whereas the incoming administration or Congress would have both the time, and a fresh electoral mandate, to examine and address the problems that the nation faced. These problems very likely would have been at the center of the debate of the just completed election cycle.

This dilemma was seen most notably in 1861 and 1933, after the elections of Abraham Lincoln and Franklin D. Roosevelt, respectively, plus the newly elected Senators and Representatives. Under the Constitution at the time, these presidents had to wait four months before they and the incoming Congresses could deal with the secession of Southern states and the Great Depression respectively.

Effect of the amendment

Section 1 of the Twentieth Amendment moved the beginning of the presidential and vice presidential terms to January 20, reducing the time those officials may serve as lame ducks by about six weeks. In Section 2, the Congressional term was set to begin even earlier, to January 3, with the annually mandated session set to begin that day. This removed the requirement for a lame duck session, but lame duck sessions in December of election years are still common.

The amendment was ratified on January 23, 1933. Pursuant to Section 5 of the amendment, the changes made by Sections 1 and 2 took effect on October 15, 1933. This delay resulted in the first inauguration of President Roosevelt and Vice President John N. Garner taking place on March 4, 1933. Section 5 also resulted in the 73rd Congress not being required to meet until December 4, 1933. Therefore, pursuant to a presidential proclamation, a special 100-day session of Congress was convened from March 9, 1933, to June 16, 1933.

On February 15, 1933, twenty-three days after the amendment was ratified, President-elect Roosevelt was the target of an unsuccessful assassination attempt by Giuseppe Zangara. If the attempt had been successful, Vice President-elect Garner would have become president on March 4, 1933, pursuant to Section 3 of the amendment.

Because of this amendment, if the Electoral College fails to resolve who will be the president or vice president, the incoming Congress, as opposed to the outgoing one, would choose who would occupy the unresolved office or offices.[8]

The Congress proposed the Twentieth Amendment on March 2, 1932, and the following states ratified it:[9]

Missouri was the 36th state to ratify, satisfying the requirement that three-fourths of the then 48 states approve the amendment.[10] The amendment was subsequently ratified by the following states: