The Twenty-third Amendment (Amendment XXIII) to the United States Constitution extends the right to vote in the presidential election to citizens residing in the District of Columbia by granting the District electors in the Electoral College, as if it were a state. The amendment was proposed by the 86th Congress on June 16, 1960, and ratified by the states on March 29, 1961.

The Electoral College, established in Article II, Section 1, Clause 2 of the United States Constitution, is the institution that elects the President and Vice President of the United States every four years. The President and Vice President are not elected directly by the voters. Instead, they are elected by "electors" who are chosen by popular vote on a state-by-state basis. As the District of Columbia is not a state, it was not entitled to any electors prior to the adoption of the Twenty-third Amendment. Citizens living in the district were therefore shut out from the presidential–vice presidential election process. The first presidential election in which the District of Columbia participated was the election of 1964. This amendment mentions the Twelfth Amendment to the United States Constitution when it mentions how the district's electors should perform duties provided by said amendment.

Section 1. The District constituting the seat of Government of the United States shall appoint in such manner as the Congress may direct:

A number of electors of President and Vice President equal to the whole number of Senators and Representatives in Congress to which the District would be entitled if it were a State, but in no event more than the least populous State; they shall be in addition to those appointed by the States, but they shall be considered, for the purposes of the election of President and Vice President, to be electors appointed by a State; and they shall meet in the District and perform such duties as provided by the twelfth article of amendment.

Section 2. The Congress shall have power to enforce this article by appropriate legislation.[2]

The United States Constitution's rules for the composition of the House of Representatives and the Senate explicitly grant seats to states, and no other entities. Similarly, electors to the Electoral College are apportioned to states, not to territories or the federal district. The main reference to the federal district is in Article I, Section 8 of the Constitution which gives Congress the power, "To exercise exclusive Legislation in all Cases whatsoever, over such District (not exceeding ten Miles square) as may, by Cession of particular States, and the Acceptance of Congress, become the Seat of the Government of the United States."[3] In the early existence of the District, it was too small and rural to merit a hypothetical seat in the House of Representatives anyway, with fewer than 30,000 inhabitants.[4]

In 1890, a bill was introduced in Congress to grant Washington, D.C. voting rights in presidential elections, but it did not proceed forward.[5] Theodore W. Noyes, a writer of the Washington Evening Star, published a number of stories in support of D.C. voting rights. Noyes also helped found the Citizens' Joint Committee on National Representation for the District of Columbia, a citizen's group which lobbied Congress to pass an amendment expanding D.C. voting rights. Noyes died in 1946, but the Citizens' Joint Committee continued onward, and the issue of District voting rights began to be seen as similar to the civil rights movement.[5] A split developed between advocates for greater power for the District after World War II. The Evening Star, continuing in the Noyes mold, supported D.C. representation in Congress and the electoral college, but opposed "home rule" (locally elected mayors & councils with actual power, rather than direct rule by Congress). The Washington Post, however, supported "home rule" and civil rights, but opposed full-fledged representation for the District.[5] Additionally, while many of the people leading the push were liberal Democrats, the District of Columbia in the 1950s was fairly balanced in its potential voting impact; Democrats had only a slight edge over Republicans, although District Republicans in the 1950s were liberal by national standards.[5] Thus, an amendment to grant the District increased voting powers was able to gain bipartisan support in a way that would have been more difficult later. Only 28% of the District was African-American according to the 1940 census, and the black population was young compared to other residents, making the voting electorate even smaller due to the voting age of 21. This grew to 54% in the 1960 census, but according to historian Clement E. Vose, "various factors—inexperience in voting, educational handicaps, residency requirements, welfare laws, and social ostracism before the Voting Rights Act of 1965—minimized black registration and voting."[6] 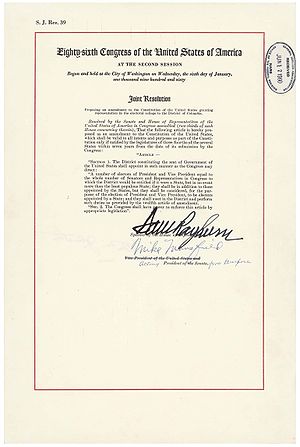 The Twenty-third Amendment in the National Archives

Adoption by the Congress

Senate Joint Resolution–39, which would eventually become the Twenty-third Amendment was introduced in 1959 by Tennessee Democratic Senator Estes Kefauver. His proposal would provide for the emergency functioning of Congress and continuity of the legislative process by authorized governors to fill vacancies in the House of Representatives “on any date that the total number of vacancies ... exceeds half of the authorized membership.” The governor’s appointive authority would have been limited to 60 days, and the appointee would have served until a successor was elected in a special election. The bill was amended twice on the Senate floor. One added provision, proposed by New York Republican Kenneth Keating, would grant the District of Columbia electoral votes in national elections and non-voting delegate(s) to the House. The other, offered by Florida Democrat Spessard Holland, would eliminate the poll tax or other property qualification as a prerequisite for voting in federal elections. The Senate passed SJR–39 in this three-amendment form on February 2, 1960, by a vote of 70–18, and sent it forward to the House.

The House Judiciary Committee, after setting aside the anti-poll tax and House emergency appointment provisions of SJR–39, sent its own proposal, House Joint Resolution–757, devoted solely to presidential electors for the District of Columbia, to the House floor for consideration. This was adopted in the House without amendment, by voice vote, on June 14, 1960. Then, by unanimous consent, the text of HJR–757 was inserted into SJR–39, the original language of which was removed. The Senate adopted the revised resolution by voice vote on June 16, 1960.[7][8][9]

Ratification by the states 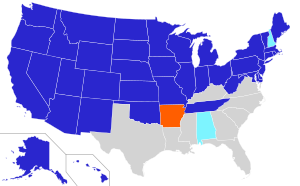 To become valid as part of the Constitution, the Twenty-third Amendment needed to be ratified by the legislatures of three-fourths of the states (38, following admission of Alaska and Hawaii to the union in 1959) within seven years from its submission to the states by Congress (June 16, 1967). President Eisenhower, along with both major party candidates in the 1960 presidential election, John F. Kennedy and Richard Nixon, endorsed the proposal. Amendment supporters ran an effective ratification campaign, mobilizing persons in almost every state to press for its approval.[6]

The following states ratified the amendment:[10]

On April 3, 1961, John L. Moore, Administrator of General Services, certiﬁed that the amendment had been adopted by the requisite number of States and had become a part of the Constitution.

While perceived as politically neutral and only somewhat liberal-leaning at the time of passage in 1961, the District swung dramatically toward the Democratic Party in the years after passage. African-Americans voted in greater numbers than they had in the 1940s and 1950s with the clearing away of restrictions on the vote, and their share of the District electorate increased - according to the 1970 census, 71% of the Federal District was black, a dramatic jump.[6] Accordingly, the District has sent its 3 electoral votes to the Democratic candidate in every single presidential election since 1964, including the 1984 landslide re-election of President Reagan, where only the District of Columbia and Minnesota voted for Democratic candidate Walter Mondale.

Unaddressed by the Twenty-third Amendment were the parallel issues of congressional representation and "home rule" for the district. On December 24, 1973, Congress approved the District of Columbia Home Rule Act, which established an elected office of mayor and a 13-member elected council for the district.[13] These officials were empowered to pass laws and enact administrative policies for the District, though Congress retained veto power, if they chose to intervene. On March 23, 1971, President Nixon signed the District of Columbia Delegate Act which authorized voters in the District to elect one non-voting delegate to represent them in the House of Representatives.[14] On August 22, 1978, Congress submitted the District of Columbia Voting Rights Amendment to the states for ratification.[15][16] This sweeping proposal would have granted the District of Columbia full representation in the United States Congress as if it were a state, repealed the Twenty-third Amendment and granted the District full representation in the Electoral College plus participation in the process by which the Constitution is amended as if it were a state.[17] The amendment failed to become part of the Constitution, however, as it was not ratified by the required number of states (38) prior to its August 22, 1985 ratification deadline.[17] The campaign for the proposed amendment ran into much fiercer conservative opposition due to the open and obvious fact that by 1978 the proposed amendment would have practically guaranteed two Democratic Senators for some time; the amendment was criticized on various other grounds as well, and was not ratified even from several more "liberal" states.[18]