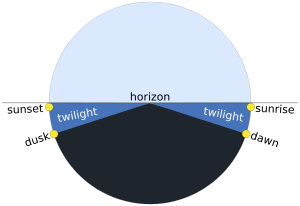 Twilight is the time between dawn and sunrise, or between sunset and dusk. 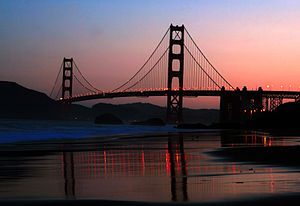 The further the Sun is below the horizon, the dimmer the twilight (other things such as atmospheric conditions being equal). When the Sun reaches 18 degrees below the horizon, the twilight's brightness is nearly zero, and evening twilight becomes nighttime. When the Sun again reaches 18 degrees below the horizon, nighttime becomes morning twilight. Owing to its distinctive quality, primarily the absence of shadows and the appearance of objects silhouetted against the bright sky, twilight has long been popular with photographers, who refer to it as 'sweet light', and painters, who refer to it as the blue hour, after the French expression: l'heure bleue.

Twilight should not be confused with auroras, which can have a similar appearance in the night sky at high latitudes.

By analogy with evening twilight, the word "twilight" is also sometimes used metaphorically, to imply that something is losing strength and approaching its end. For example, very old people may be said to be in the twilight of their lives. The collateral adjective for twilight is crepuscular; it is most frequently encountered when applied to certain insects, fish and mammals that are most active during that time. 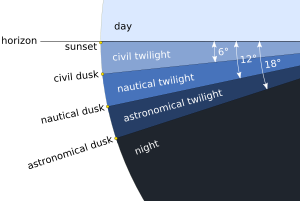 Civil, nautical, and astronomical twilight. The Sun is shown to scale.[2]

Twilight is defined according to the solar elevation angle θs, which is the position of the geometric center of the sun relative to the horizon. There are three established and widely accepted subcategories of twilight: civil twilight (brightest), nautical twilight, and astronomical twilight (darkest).[1] 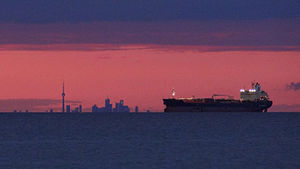 Civil twilight is approximately the limit at which solar illumination is sufficient, under clear weather conditions, for terrestrial objects to be clearly distinguished. There is enough light from the sun during this period that artificial sources of light are not needed to carry on most outdoor activities.

This concept is sometimes enshrined in laws, for example, when drivers of automobiles must turn on their headlights (called lighting-up time in the UK); when pilots require a night rating to fly aircraft; restrictions on hunting; or if the crime of burglary is to be treated as nighttime burglary, which carries stiffer penalties in some jurisdictions. Such statutes typically use a fixed period after sunset or before sunrise (most commonly 20–30 minutes), rather than how many degrees the sun is below the horizon.

During nautical twilight, the horizon is clearly visible, but artificial lighting must be used to see terrestrial objects clearly.

During nautical twilight, sailors can take reliable star sightings of well-known stars, using a visible horizon for reference. The end of this period in the evening, or its beginning in the morning, is also the time at which traces of illumination near the sunset or sunrise point of the horizon are very difficult, if not impossible, to discern (this often being referred to as "first light" before civil dawn and "nightfall" after civil dusk). At the beginning of nautical twilight in the morning (nautical dawn), or at the end of nautical twilight in the evening (nautical dusk), and under good atmospheric conditions with the absence of other illumination, general outlines of ground objects may be distinguishable; but detailed outdoor operations are not possible, and the horizon is indistinct.

Nautical twilight has military considerations as well. The initialisms BMNT (begin morning nautical twilight, i.e. nautical dawn) and EENT (end evening nautical twilight, i.e. nautical dusk) are used and considered when planning military operations. A military unit may treat BMNT and EENT with heightened security, e.g. by "standing to", in which everyone assumes a defensive position. This is partially due to tactics dating back to the French and Indian War (part of the Seven Years' War of 1756–1763), when combatants on both sides would launch attacks at nautical dawn or dusk.[citation needed]

Most casual observers would consider the entire sky fully dark even when astronomical twilight is just beginning in the evening or just ending in the morning, and astronomers can easily make observations of point sources such as stars. However, some critical observations, such as of faint diffuse items such as nebulae and galaxies, may require that the sun be more than 18° below the horizon, beyond the limit of astronomical twilight.

Theoretically, the dimmest stars ever visible to the naked eye (those of the sixth magnitude) will become visible in the evening once the sun falls more than 18° below the horizon (i.e., at astronomical dusk), and become invisible when the sun moves to within 18° of the horizon in the morning (at astronomical dawn). However, because of light pollution, some localities, generally those in large cities, may never have the opportunity to view even fourth-magnitude stars, irrespective of the presence of any twilight at all, and to experience truly dark skies.

Twilight between day and night

The most familiar occurrences of twilight are between dawn and sunrise and between sunset and dusk each day. These occur for observers at latitudes within 48.5 degrees of the Equator on all dates of the year, and also for most observers at higher latitudes on many dates. However, at latitudes closer than 9 degrees to either Pole, the Sun cannot rise above the horizon and go more than 18 degrees below it on the same day on any date, so this type of twilight cannot occur as the angular elevation difference between solar noon and solar midnight is less than 18 degrees.

Twilight lasting from one day to the next

At latitudes greater than about 48.5 degrees North or South, on dates near the summer solstice, twilight can last from sunset to sunrise, since the Sun does not go more than 18 degrees below the horizon, so complete darkness does not occur even at midnight. These latitudes include many densely populated regions of the Earth, including the entire United Kingdom and other countries in northern Europe. This type of twilight also occurs at latitudes above the polar circles on dates shortly before and shortly after the 'midnight sun' occurs.

Twilight between one night and the next

In Arctic and Antarctic latitudes in wintertime, the polar night only rarely produces complete darkness for 24 hours each day. This can occur only at locations within 5.5 degrees of latitude of the Pole, and there only on dates very close to the winter solstice. At all other latitudes and dates, the polar night includes a daily period of twilight, when the Sun is not far below the horizon.

At latitudes within 9 degrees of either pole, as the sun's angular elevation difference is less than 18 degrees, twilight can last for the entire 24 hours. This occurs for one day at latitudes near 9 degrees from the pole and extends up to several weeks the further towards the pole one goes. The only permanent settlement to experience this condition is Alert, Nunavut, Canada, where it occurs for a week in late February, and again in late October. 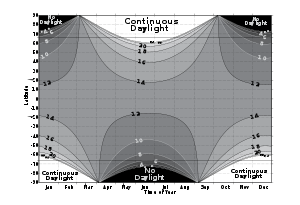 The number of daylight hours depends on the latitude and time of year. Each pole has continuous daylight near its summer solstice. 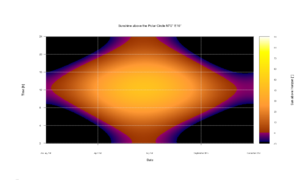 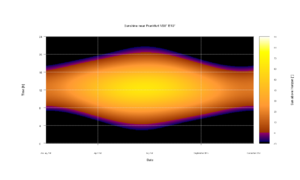 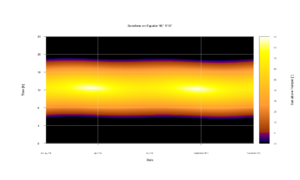 Carpet plot of sunshine at the equator

The apparent travel of the sun occurs at the rate of 15 degrees per hour (360° per day), but sunrise and sunset happen typically at oblique angles to the horizon and the actual duration of any twilight period will be a function of that angle, being longer for more oblique angles. This angle of the sun's motion with respect to the horizon changes with latitude as well as the time of year (affecting the angle of the Earth's axis with respect to the sun).

At Greenwich, England (51.5°N), the duration of civil twilight will vary from 33 minutes to 48 minutes, depending on the time of year. At the equator, conditions can go from day to night in as little as 20–25 minutes. This is true because at low latitudes the sun's apparent movement is perpendicular to the observer's horizon. But at the poles, civil twilight can be as long as 2–3 weeks. In the Arctic and Antarctic regions, twilight (if there is any) can last for several hours. There is no astronomical twilight at the poles near the winter solstice (for about 74 days at the North Pole and about 80 days at the South Pole). As one gets closer to the Arctic and Antarctic circles, the sun's disk moves toward the observer's horizon at a lower angle. The observer's earthly location will pass through the various twilight zones less directly, taking more time.

These are the largest cities of their respective countries, where the various twilights can continue through local solar midnight:

Although Helsinki, Oslo, Stockholm, Tallinn and Saint Petersburg do not actually receive civil twilight from sunset to sunrise, they do have noticeably lighter skies at night (known as white nights) around the summer solstice.

Twilight on Mars is longer than on Earth, lasting for up to two hours before sunrise or after sunset. Dust high in the atmosphere scatters light to the night side of the planet. Similar twilights are seen on Earth following major volcanic eruptions.[8]

Twilight is sacred in Hinduism. It is called गोधूळिवेळ gōdhūḷivēḷ in Marathi or गोधूलिवेला godhūlivelā in Hindi, literally "cow dust time". Many rituals, including Sandhyavandanam and Puja, are performed at twilight hour. Eating of food is not advised during this time. Sometimes it is referred to as Asurasandhya vela. It is believed that Asuras are active during these hours. One of the avatars of Lord Vishnu, Narasimha, is closely associated with the twilight period. According to Hindu scriptures, a daemonic king, Hiranyakashipa, performed penance and obtained a boon from Brahma not to be killed during days or night times and neither by human nor animal. As Godhulivela is not regarded as either day or night, Lord Vishnu ended the life of Hiranakashipa during these hours.[9]

Twilight is important in Islam as it determines when certain universally obligatory prayers are to be recited. Morning twilight is when morning prayers (Fajr) are done, while evening twilight is the time for evening prayers (Maghrib prayer). There is also an important discussion in Islamic jurisprudence between "true dawn" and "false dawn".

In Christian practice, "vigil" observances often occur during twilight on the evening before major feast days or holidays. For example, the Easter Vigil is held in the hours of darkness between sunset on Holy Saturday and sunrise on Easter Day — most commonly in the evening of Holy Saturday or midnight — and is the first celebration of Easter, days traditionally being considered to begin at sunset.