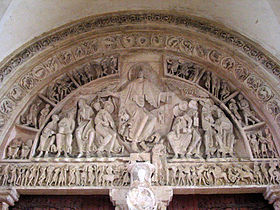 The late Romanesque tympanum of Vézelay Abbey, Burgundy, France, dating from the 1130s

In architecture, a tympanum (plural, tympana) is the semi-circular or triangular decorative wall surface over an entrance, bounded by a lintel and arch.[1] It often contains sculpture or other imagery or ornaments.[2] Most architectural styles include this element.[3] In ancient Greek and Roman and in Christian architecture tympana usually contain religious imagery,[4] when on religious buildings, and are very often the most important, or only, location for monumental sculpture on the outside of a building. In classical architecture, and in classicising styles from the Renaissance onwards, major examples are usually triangular; in Romanesque architecture they have a semi-circular shape, or that of a thinner slice from the top of a circle, and in Gothic architecture they have a more vertical shape, coming to a point at the top. These shapes naturally influence the typical compositions of sculpture within the tympanum.

Bands of molding surrounding the tympanum are referred to as the archivolt.[5] In medieval French architecture the tympanum is often supported by a decorated pillar called a trumeau.