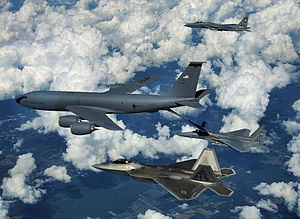 An F-22 Raptor and two F-15 Eagles from Tyndall Air Force Base participate in a refueling mission with a KC-135 Stratotanker from the Mississippi Air National Guard over eastern Florida, 22 September 2008. 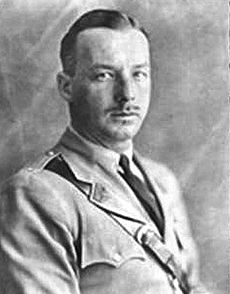 Tyndall Air Force Base is a United States Air Force Base located 12 miles (19 km) east of Panama City, Florida. The base was named in honor of World War I pilot 1st Lt Frank Benjamin Tyndall. The base operating unit and host wing is the 325th Fighter Wing (325 FW) of the Air Combat Command (ACC). The base is delineated as a census-designated place and had a resident population of 2,994 at the 2010 census.[1]

From 1983 until 2010, training for F-15 Eagle pilots was performed at Tyndall AFB by the 1st, 2d, and 95th Fighter Squadrons. The 1 FS inactivated in 2006, while the 2 FS and 95 FS inactivated in May and September 2010, respectively. During this time, Tyndall also hosted training for F-15C/D maintenance personnel and intelligence officers assigned to F-15C/D units. The 95 FS was reactivated in September 2013 as part of the F-22 Raptor consolidation plan that moved the 7th Fighter Squadron's aircraft to Tyndall. The 2d Fighter Training Squadron was activated in 2014 to perform the T-38 adversary operations in support of the F-22 training mission.

The 53d Weapons Evaluation Group (53 WEG), is an Air Combat Command tenant organization that reports to the 53d Wing (53 WG) at nearby Eglin Air Force Base. Among its subordinate squadrons at Tyndall, the 53 WEG manages offshore weapons ranges over the Gulf of Mexico, manages target drone programs ranging from sub-scale target drones to a fleet of QF-4 Phantom II Full-Scale Aerial Targets (FSAT), most of which are converted F-4E and F-4G aircraft. The 53 WEG will also have management of QF-16 as older F-16A and F-16C aircraft are converted to FSATs. The 53 WEG also serves as primary manager for "William Tell," the annual U.S. Air Force Air-to-Air Weapons Meet and competition.

Additionally, all of the Air Force's Air Battle Managers are initially trained at Tyndall prior to proceeding to Tinker AFB, Oklahoma for actual positional training in the E-3 Sentry AWACS aircraft.

The Air Force Civil Engineer Center is also headquartered at Tyndall and a branch of the Air Force Research Laboratory's Materials and Manufacturing Directorate also has facilities at the base. 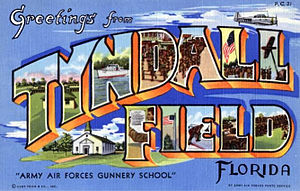 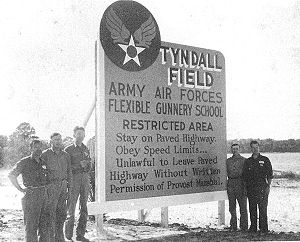 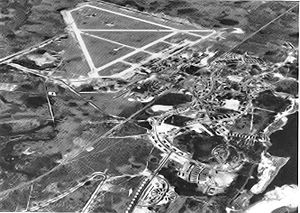 Tyndall Field was opened on 13 January 1941 as a gunnery range. The airfield was named in honor of 1st Lt Frank Benjamin Tyndall (1894–1930).[3] With the establishment of the United States Air Force in 1947, the facility was renamed "Tyndall Air Force Base" on 13 January 1948. In December 1940, a site board determined that Flexible Gunnery School No. 9 would be located 12 miles (19 km) southeast of Panama City, Florida on East Peninsula. On 6 May 1941, Army and local dignitaries held an official ground breaking for the school. Panama City's mayor, Harry Fannin, dug the first spade full of sand, and Colonel Warren Maxwell, Tyndall's first commander, wielded the first ax on the stubborn palmetto plants, so common on the East Peninsula. The site was covered with pine and palmetto trees, scrub brush, and swamps. Bulldozers worked around the clock to clear the brush and fill in swamps.[4]

Although construction was well underway, the base lacked a name. Congressman Bob Sikes suggested naming the school in memory of Lieutenant Francis B. Tyndall. A native of Sewall's Point, Florida, Lieutenant Tyndall was a fighter pilot during World War I and was credited with shooting down six German planes well behind enemy lines in 1918. Lieutenant Tyndall was a World War I pilot, Silver Star recipient, and commander of the 22d Aero Squadron. Lieutenant Tyndall shot down six enemy airplanes in combat over France during World War I. While inspecting Army fields near Mooresville, North Carolina on 15 July 1930, Tyndall's plane, Curtiss P-1F Hawk, 28–61, crashed, killing him instantly. On 13 June 1941, the War Department officially named the new installation Tyndall Field.[4]

When World War II ended, Tyndall Field was demobilized. The base fell under the control of the Tactical Air Command (TAC) in 1946, but this only lasted three months, as Tyndall became part of the Air University (AU). Tyndall Field was subsequently renamed as Tyndall Air Force Base when the U.S. Air Force became a separate service in 1947.[4]

In September 1950, Tyndall became an Air Training Command (ATC) installation, designated as the USAF Pilot Instructor School. The base also trained Ground Controlled Intercept (GCI) operators as well as interceptor pilots & flight crews for the Air Defense Command. Under the auspices of this training system, GCI trainees would direct TF-51H Mustangs against "enemy" A-26 Invaders. In late 1952, both aircraft were replaced by Lockheed T-33 Shooting Star jet trainers. Airborne radar operator students would begin their training aboard radar-equipped TB-25 Mitchells, then transition to either Lockheed F-94 Starfire or Northrop F-89 Scorpion aircraft. North American F-86F and F-86Ds were eventually added to the training program as Air Defense Command (ADC) units were equipped with them.[4]

In September 1957, Tyndall became an Air Defense Command, later Aerospace Defense Command, base until October 1979 when ADC was inactivated and all its bases and units transferred to Tactical Air Command. Tyndall was headquarters of the ADC 73d Air Division in the late 1950s, and the NORAD Southeast Air Defense Sector from 1960 to 1979. Also the ADC 20th Air Division was based at Tyndall, which was responsible for the air defense of virtually all of the southeastern United States during the 1960s and 1970s. The ADC 23d Air Division, also based at Tyndall, was responsible for air defense forces in the upper midwest and south central United States.[4][5][6]

In the late 1950s into the 1960s, the base transitioned into the North American F-100 Super Sabre, F-101B, F-102A and TF-102B, F-104 Starfighter, and the F-106A and B aircraft, training interceptor pilots for ADC assignments. The base served as a stopover and refueling point for ADC aircraft deployed to Florida during the Cuban Missile Crisis, to be redeployed to other bases in the southeast shortly thereafter. The base maintained an alert facility from which the F-101 Voodoo and F-102 Delta Dagger interceptors were scrambled to intercept unknown aircraft. Tyndall shared training for the F-102 aircraft with Perrin AFB, Texas until Perrin AFB's closure in mid-1971.[4]

On 1 July 1956 Tyndall AFB became the station operating for the third phase of the ADC mobile radar program, being designated as TM-198. Activated by the 678th Aircraft Control and Warning Squadron, Tyndall became operational to support the CIM-10 Bomarc surface-to-air missile program at Hurlburt Field. In 1958 the site was operating with an AN/FPS-20 search radar and a pair of AN/FPS-6 height-finder sets to support the 4751st Air Defense Missile Squadron.

In 1962 the search radar was upgraded and re-designated as an AN/FPS-64. On 31 July 1963, the site was redesignated as NORAD ID Z-198. During 1965 Tyndall AFB joined the Semi Automatic Ground Environment (SAGE) system, feeding data to DC-09 at Gunter AFB, Alabama. After joining, the squadron was re-designated as the 678th Radar Squadron (SAGE) on 1 June 1965. Also in 1965, Tyndall became a joint-use facility with the Federal Aviation Administration (FAA).

It also received a Back-Up Interceptor Control (BUIC) II, and later BUIC III, capability to perform command and control functions. Tyndall retained this function until the 1980s. On 1 March 1970, the 678th was redesignated as the 678th Air Defense Group. 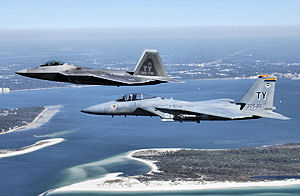 In 1991, Tyndall underwent a reorganization in response to the Department of Defense efforts to streamline defense management. Headquarters, First Air Force, what had predominantly been the Numbered Air Force for the Air National Guard, moved from Langley AFB, Virginia, to Tyndall. With the disestablishment of Tactical Air Command (TAC) in 1992, Tyndall was temporarily transferred to the Air Combat Command (ACC) and then to the Air Education and Training Command (AETC) in July 1993.[4]

The 21st century proved to be momentous for Tyndall AFB. The base was selected as the first home of the Air Force's newest aircraft, the F-22 Raptor. 2002 brought more change as the Chief of Staff of the Air Force changed the organizational structure of the 325th Fighter Wing, from an objective type wing to a combat organization. This organization moved all maintenance activities under the 325th Maintenance Group and all support activities under the 325th Mission Support Group.[4]

Today, Tyndall is the home of the 325th Fighter Wing, providing training for all F-22A Raptor pilots. In 2012, with the gaining of a combat-coded F-22 squadron, Tyndall AFB returned to Air Combat Command, after a 19-year tenure in AETC.[4]

There were 663 households out of which 81.0% had children under the age of 18 living with them, 90.8% were married couples living together, 5.1% had a female householder with no husband present, and 1.4% were non-families. 1.2% of all households were made up of individuals and 0.2% had someone living alone who was 65 years of age or older. The average household size was 3.57 and the average family size was 3.59.