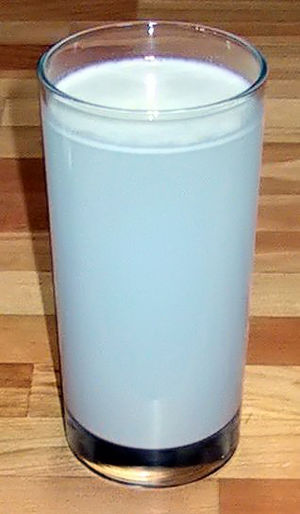 Flour suspended in water appears to be blue because only scattered light reaches the viewer and blue light is scattered by the flour particles more than red.

The Tyndall effect, also known as Tyndall scattering, is light scattering by particles in a colloid or else particles in a very fine suspension. It is named after the 19th-century physicist John Tyndall. It is similar to Rayleigh scattering, in that the intensity of the scattered light depends on the fourth power of the frequency, so blue light is scattered much more strongly than red light. An example in everyday life is the blue colour sometimes seen in the smoke emitted by motorcycles, in particular two-stroke machines where the burnt engine oil provides the particles.

Under the Tyndall effect, the longer-wavelength light is more transmitted while the shorter-wavelength light is more reflected via scattering. An analogy to this wavelength dependency is that longwave electromagnetic waves such as radio waves are able to pass through the walls of buildings, while shortwave electromagnetic waves such as light waves are stopped and reflected by the walls. The Tyndall effect is seen when light-scattering particulate-matter is dispersed in an otherwise-light-transmitting medium, when the cross-section of an individual particulate is the range of roughly between 40 and 900 nanometers, i.e., somewhat below or near the wavelength of visible light (400–750 nanometers).

It is particularly applicable to colloidal mixtures and fine suspensions; for example, the Tyndall effect is used commercially to determine the size and density of particles in aerosols and other colloidal matter (see ultramicroscope and turbidimeter). 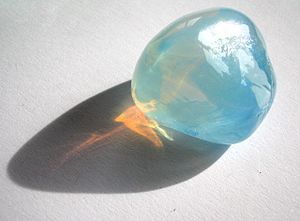 The Tyndall effect in opalescent glass: It appears blue from the side, but orange light shines through.[1]

A blue iris in an eye is due to Tyndall scattering in a turbid layer in the iris. Brown and black irises have the same layer except with more melanin in it. The melanin absorbs light. In the absence of melanin, the layer is translucent (i.e., the light passing through is randomly and diffusely scattered) and a noticeable portion of the light that enters this turbid layer re-emerges via a scattered path. That is, there is backscatter, the redirection of the lightwaves back out to the open air. Scattering takes place to a greater extent at the shorter wavelengths. The longer wavelengths tend to pass straight through the turbid layer with unaltered paths, and then encounter the next layer further back in the iris, which is a light absorber. Thus, the longer wavelengths are not reflected (by scattering) back to the open air as much as the shorter wavelengths are. Since the shorter wavelengths are the blue wavelengths, this gives rise to a blue hue in the light that comes out of the eye.[2][3] The blue iris is an example of a structural color, in contradistinction to a pigment color. The complete absence of pigment in eyes (albinism) causes the eye to appear red, due to the visibility of the red of the retina through the iris.[4]

Some phenomena that are not Tyndall scattering

On a day when the sky is overcast, the sunlight passes through the turbid layer of the clouds, resulting in scattered, diffuse light on the ground. This does not exhibit Tyndall scattering because the cloud droplets are larger than the wavelength of light and scatter all colors approximately equally. On a day when the sky is cloud-free, the sky's color is blue in consequence of light scattering, but this is not termed Tyndall scattering (instead it is Rayleigh scattering) because the scattering particles are the molecules of the air, which are much smaller than the wavelength of the light.[5] On occasion, the term Tyndall effect is incorrectly applied to light scattering by large (macroscopic) dust particles in the air.