Tyneham is a ghost village in south Dorset, England, near Lulworth on the Isle of Purbeck. It remains a civil parish. 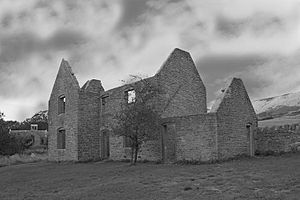 The village is situated northeast of Worbarrow Bay on the Jurassic Coast, about 6 kilometres (3.7 mi) south of Wareham and about 16 kilometres (9.9 mi) west of Swanage. The village lies in a secluded east-west valley between two ridges of the Purbeck Hills. To the north is the main ridge with Povington Hill (191 m) and its highest point, Ridgeway Hill (199 m). To the south is the ridge above Gad Cliff that runs from the headland of Worbarrow Tout in the west to the knoll of Tyneham Cap (167 m) in the east.[1]

Tyneham is only accessible when the Lulworth Ranges are open to the public. The military firing ranges are owned by the Ministry of Defence (MoD) and are part of the Armoured Fighting Vehicles Gunnery School. Safety warnings about explosives and unexploded shells are posted at Mupe Bay by the MoD: visitors are advised to keep to official footpaths and abide to local site notices because tanks and armoured vehicles are used in this area.[2]

Evidence of Roman occupation has been found on several occasions in the valley around Tyneham and there have been fishing communities associated with the parish since the Iron Age.

It seems that it was once the possession of Robert, Count of Mortain the half-brother of William I of England. The village is mentioned in the Domesday Book as Tigeham, meaning "goat enclosure". A century later, the village was known as Tiham and only in later times as Tyneham. The limestone church of St Mary dates from the 13th Century.

In 1683 Nathaniel Bond (1634–1707) of Lutton acquired Tyneham from the Williams family. He also bought Creech Grange in 1691[3] and the family still hold their Purbeck estates. Tyneham school was established by the Reverend Nathaniel Bond (1804–89) in 1860. It was later declared as property of the rectory and was closed in 1932 due to lack of pupils.

The village and 7,500 acres (30 km2) of surrounding heathland and chalk downland around the Purbeck Hills, were commandeered just before Christmas 1943 by the then War Office (now MoD) for use as firing ranges for training troops.[4] 225 people were displaced,[5] the last person leaving a notice on the church door:

Please treat the church and houses with care; we have given up our homes where many of us lived for generations to help win the war to keep men free. We shall return one day and thank you for treating the village kindly.[6]

This measure was supposed to be temporary for the duration of World War II, but in 1948 the Army placed a compulsory purchase order on the land and it has remained in use for military training ever since.[7] Though littered with scrap used as targets, and subject to regular shelling, the land has become a haven for wildlife as it has been free from farming and development. In 1975, after complaints from tourists and locals, the Ministry of Defence began opening the village and footpaths across the ranges at weekends and throughout August. Many of the village buildings have fallen into disrepair or have been damaged by shelling and in 1967 the then Ministry of Works pulled down the Elizabethan manor house, though the church remains intact, and has a stained-glass window by Martin Travers. The church and school house have since been preserved as museums.[6] In 2008, Tyneham Farm was reopened to the public and conservation work there is ongoing.

In the 1980s the village was used for the filming of Comrades, which tells the story of the Tolpuddle Martyrs. The church had a fibreglass tower and large additional gravestones added and the village's Post Office Row was fronted with fibreglass cottages.[6] During the filming Tyneham's original 1929 K1 Mark 236 telephone kiosk was flattened and the film company sourced a replacement.[8]

The village is the setting for the climax to the comic-thriller Angel's Share by Mike Ripley (2006).