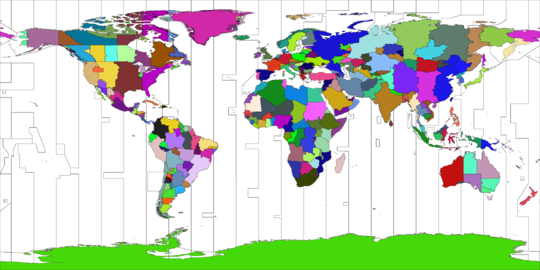 The tz database partitions the world into regions where local clocks have all been the same since 1970. This map, taken from the 2012c edition of the database, is of all the regions outside Antarctica.[1]

The tz database, also called tzdata, the zoneinfo database or IANA (Internet Assigned Numbers Authority) time zone database, is a collaborative compilation of information about the world's time zones, primarily intended for use with computer programs and operating systems.[2] It is sometimes called the Olson database, referring to the founding contributor, Arthur David Olson.[3] Paul Eggert is currently[update] its editor and maintainer.[4]

Its uniform naming convention for time zones, such as America/New_York and Europe/Paris, was designed by Paul Eggert.[5] The database attempts to record historical time zones and all civil changes since 1970, the Unix time epoch.[6] It also includes transitions such as daylight saving time, and also records leap seconds.[7]

The database, as well as some reference source code, is in the public domain.[8] New editions of the database and code are published as changes warrant, usually several times per year.[9]

The tz database is published as a set of text files which list the rules and zone transitions in a human-readable format. For use, these text files are compiled into a set of platform-independent binary files—one per time zone. The reference source code includes such a compiler called zic (zone information compiler), as well as code to read those files and use them in standard application programming interfaces such as localtime() and mktime().

Definition of a time zone

Within the tz database, a time zone is any national region where local clocks have all agreed since 1970.[10] This definition concerns itself first with geographic areas which have had consistent local clocks. This is different from other definitions which concern themselves with consistent offsets from a prime meridian. Therefore, each of the time zones defined by the tz database may document multiple offsets from UTC, typically including both standard time and daylight saving time.

The time zones have unique names in the form "Area/Location", e.g. "America/New_York". A choice was also made to use English names or equivalents, and to omit punctuation and common suffixes. The underscore character is used in place of spaces. Hyphens are used where they appear in the name of a location. The names have a maximum length of 14 characters.[11]

Area is the name of a continent, an ocean, or "Etc". The continents and oceans currently[update] include: Africa, America, Antarctica, Arctic, Asia, Atlantic, Australia, Europe, Indian, and Pacific.

The oceans are included since some islands are hard to connect to a certain continent. Some are geographically connected to one continent and politically to another. See also Boundaries between continents.

The special area of "Etc" is used for some administrative zones, particularly for "Etc/UTC" which represents Coordinated Universal Time. In order to conform with the POSIX style, those zone names beginning with "Etc/GMT" have their sign reversed from the standard ISO 8601 convention. In the "Etc" area, zones west of GMT have a positive sign and those east have a negative sign in their name (e.g "Etc/GMT-14" is 14 hours ahead/east of GMT.)

Location is the name of a specific location within the area – usually a city or small island.

Country names are not used in this scheme, primarily because they would not be robust due to frequent political and boundary changes. The names of large cities tend to be more permanent. However, the database maintainers attempt to include at least one zone for every ISO 3166-1 alpha-2 country code, and a number of user interfaces to the database take advantage of this. Additionally there is a desire to keep locations geographically compact so that any future time zone changes do not split locations into different time zones.[citation needed]

Usually the most populous city in a region is chosen to represent the entire time zone, although other cities may be selected if they are more widely known or result in a less ambiguous name.[citation needed] In the event that the name of a city changes, the convention is to create an alias[citation needed] in future editions so that both the old and new names refer to the same database entry.

The location selected is representative for the entire area.

Data stored for each zone

For each time zone that has multiple offsets (usually due to daylight saving time), the tz database records the exact moment of transition. The format can accommodate changes in the dates and times of transitions as well. Zones may have historical rule changes going back many decades (as shown in the example above).

The file zone.tab is in the public domain and lists the zones. Columns and row sorting are described in the comments of the file, as follows:

Data before 1970 aims to be correct for the city identifying the region, but is not necessarily correct for the entire region. This is because new regions are created only as required to distinguish clocks since 1970.

For example, between 1963-10-23 and 1963-12-09 in Brazil only the states of Minas Gerais, Espirito Santo, Rio de Janeiro, and São Paulo had summer time. However, a requested split from America/Sao_Paulo was rejected in 2010 with the reasoning that, since 1970, the clocks were the same in the whole region.[13]

Time in Germany, which is represented by Europe/Berlin, is not correct for the year 1945 when the Trizone used different daylight saving time rules than Berlin.[14]

There are two zones that cover an area that was covered by two countries after 1970. The database follows the definitions of countries as per ISO 3166-1, whose predecessor, ISO 3166, was first published in 1974.

The tz reference code and database is maintained by a group of volunteers. Arthur David Olson makes most of the changes to the code, and Paul Eggert to the database. Proposed changes are sent to the tz mailing list, which is gatewayed to the comp.time.tz Usenet newsgroup. Source files are distributed via the IANA FTP server. Typically, these files are taken by a software distributor like Debian, compiled, and then the source and binaries are packaged as part of that distribution. End users can either rely on their software distribution's update procedures, which may entail some delay, or obtain the source directly and build the binary files themselves. A future maintenance plan based on similar principles has been drafted through the IETF.

The standard path for the timezone database is /usr/share/zoneinfo/ on most Unix-like systems, including Linux distributions.

Use in other standards

The Unicode Common Locale Data Repository (CLDR) uses UN/LOCODEs to identify regions.[15] This means all identifiers are referencing a country, something that the creators of the tz database wanted to avoid.[clarification needed]

Use in software systems

The tz database is used for time zone processing and conversions in many computer software systems, including:

On September 30, 2011, a lawsuit, Astrolabe, Inc. v. Olson et al., was filed concerning copyright in the database.[25][26] As a result, on October 6, 2011, the database's mailing list and FTP site were shut down.[27] The case revolved around the database maintainers' use of The American Atlas, by Thomas G. Shanks, and The International Atlas, by Thomas G. Shanks and Rique Pottenger. It specifically complained of unauthorised reproduction of atlas data in the timezone mailing list archive and in some auxiliary link collections maintained with the database, though it did not actually point at the database itself. The complaint related only to the compilation of historical timezone data, and did not cover current tzdata world timezone tables.[26][28][29]

This lawsuit was resolved on February 22, 2012 after the involvement of the Electronic Frontier Foundation, when Astrolabe “voluntarily” moved to dismiss the lawsuit without having ever served the defendants and agreed to a covenant not to sue in the future.[30]

ICANN took responsibility for the maintenance of the database on October 14, 2011.[31] The full database and a description of current and future plans for its maintenance are available online from IANA.[32]