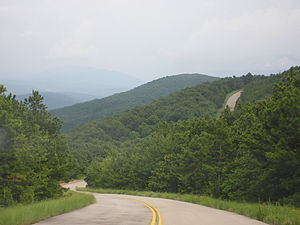 The U.S. Interior Highlands is a mountainous region spanning eastern Oklahoma, western and northern Arkansas, southern Missouri, and the extreme southeast corner of Kansas. The name is designated by the United States Geological Survey to refer to the combined mountainous region of the Ozarks and Ouachita Mountains, which form a distinct physiographic division.[1] It is the only major highland region between the Rocky Mountains and the Appalachian Mountains in the United States.[2][3]