The United States Open Championship, commonly known as the U.S. Open, is the annual open golf tournament of the United States. It is the second of the four major championships in golf, and is on the official schedule of both the PGA Tour and the European Tour. It is staged by the United States Golf Association (USGA) in mid-June, scheduled so that, if there are no weather delays, the final round is played on the third Sunday, which is Father's Day.

The U.S. Open is staged at a variety of courses, set up in such a way that scoring is very difficult with a premium placed on accurate driving. U.S. Open play is characterized by tight scoring at or around par by the leaders, with the winner usually emerging at around even par. A U.S. Open course is seldom beaten severely, and there have been many over-par wins (in part because par is usually set at 70, except for the very longest courses). Normally, an Open course is quite long and will have a high cut of primary rough (termed "Open rough" by the American press and fans), undulating greens (such as at Pinehurst No. 2 in 2005, which was described by Johnny Miller of NBC as "like trying to hit a ball on top of a VW Beetle"), and pinched fairways (especially on what are expected to be less difficult holes). Some courses that are attempting to get into the rotation for the U.S. Open will undergo renovations to develop these features. Rees Jones is the most notable of the "Open Doctors" who take on these projects; his father Robert Trent Jones had filled that role earlier. As with any professional golf tournament, the available space surrounding the course (for spectators, among other considerations) and local infrastructure also factor into deciding which courses will host the event.

The first U.S. Open was played on October 4, 1895, on a nine-hole course at the Newport Country Club in Newport, Rhode Island. It was a 36-hole competition and was played in a single day. Ten professionals and one amateur entered. The winner was a 21-year-old Englishman named Horace Rawlins, who had arrived in the U.S. in January that year to take up a position at the host club. He received $150 cash out of a prize fund of $335, plus a $50 gold medal; his club received the Open Championship Cup trophy, which was presented by the USGA.[1][2]

In the beginning, the tournament was dominated by experienced British players until 1911, when John J. McDermott became the first native-born American winner. American golfers soon began to win regularly and the tournament evolved to become one of the four majors. 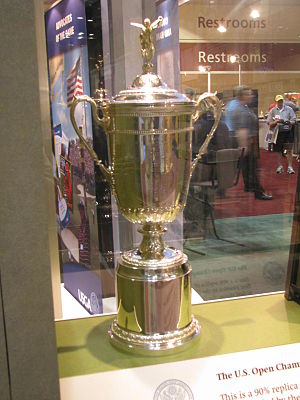 Since 1911, the title has been won mostly by players from the United States. Since 1950, players from only six countries other than the United States have won the championship, most notably South Africa, which has won five times since 1965. A streak of four consecutive non-American winners occurred from 2004 to 2007 for the first time since 1910. These four players, South African Retief Goosen (2004), New Zealander Michael Campbell (2005), Australian Geoff Ogilvy (2006) and Argentine Ángel Cabrera (2007), are all from countries in the Southern Hemisphere. Northern Ireland's Graeme McDowell (2010) became the first European player to win the event since Tony Jacklin of England in 1970; three more Europeans won in the next four editions, making it only three American wins in the last 11 tournaments.

The U.S. Open is open to any professional, or to any amateur with an up-to-date men's USGA Handicap Index not exceeding 1.4.[3] Players (male or female)[3] may obtain a place by being fully exempt or by competing successfully in qualifying. The field is 156 players.

About half of the field is made up of players who are fully exempt from qualifying. As of the most recent U.S. Open in 2014, the exemption categories are:[4]

The exemptions for amateurs apply only if the players remain amateurs as of the tournament date.

Through 2011, exemptions existed for leading money winners on the PGA, European, Japanese, and Australasian tours, as well as winners of multiple PGA Tour events in the year before the U.S. Open. These categories were eliminated in favor of inviting the top 60 on the OWGR at both relevant dates.[6] Starting with the 2012 championship, an exemption was added for the winner of the current year's BMW PGA Championship, the European Tour's equivalent of The Players Championship.[7]

Potential competitors who are not fully exempt must enter the Qualifying process, which has two stages. Firstly there is Local Qualifying, which is played over 18 holes at more than 100 courses around the United States. Many leading players are exempt from this first stage, and they join the successful local qualifiers at the Sectional Qualifying stage, which is played over 36 holes in one day at several sites in the U.S., as well as one each in Europe and Japan. There is no lower age limit and the youngest-ever qualifier was 14-year-old Andy Zhang of China, who qualified in 2012 after Paul Casey withdrew days before the tournament.

The purse at the 2014 U.S. Open was $9 million, and the winner's share was $1.62 million. The European Tour uses conversion rates at the time of the tournament to calculate the official prize money used in their Race to Dubai (€6,665,578 in 2014). In line with the other majors, winning the U.S. Open gives a golfer several privileges that make his career much more secure if he is not already one of the elite players of the sport. U.S. Open champions are automatically invited to play in the other three majors (the Masters, The Open Championship (British Open), and the PGA Championship) for the next five years, as well as The Players Championship, and they are exempt from qualifying for the U.S. Open itself for 10 years. They may also receive a five-year exemption on the PGA Tour, which is automatic for regular members. Non-PGA Tour members who win the U.S. Open have the choice of joining the PGA Tour either within 60 days of winning, or prior to the beginning of any one of the next five tour seasons. Finally, U.S. Open winners receive automatic invitations to three of the five senior majors once they turn 50; they receive a five-year invitation to the U.S. Senior Open and a lifetime invitation to the Senior PGA Championship and Senior British Open.

The top 10 finishers at the U.S. Open are fully exempt from qualifying for the following year's Open, and the top four are automatically invited to the following season's Masters.

The U.S. Open is the only one of the four major championships which retains a full 18-hole playoff the following day (Monday). If a tie exists after that fifth round, then the playoff continues as sudden-death on the 91st hole. The U.S. Open has advanced to sudden-death three times (1990, 1994, 2008), most recently when Tiger Woods defeated Rocco Mediate on the first additional playoff hole in 2008. Before sudden-death was introduced in the 1950s, additional 18-hole rounds were played (1925, 1939, and 1946) to break the tie. When the playoff was scheduled for 36 holes and ended in a tie, as in 1931, a second 36-hole playoff was required.

Summary by course, state and region

The seventeenth state to host the tournament was North Carolina in 1999, followed by Washington in 2015; Wisconsin is scheduled to be the nineteenth, in 2017.

There is an extensive records section on the official site here.

Coverage was previously televised by NBC and ESPN through 2014. NBC's most recent period as rightsholder began in 1995; ABC held the broadcast rights from 1966 through 1994.[14]