From Infogalactic: the planetary knowledge core
(Redirected from U.S. Route 26 (Oregon))
Jump to: navigation, search
"OR 2" redirects here. OR 2 may also refer to Oregon's 2nd congressional district.
This article is about the section of U.S. Route 26 in Oregon. For the entire route, see U.S. Route 26.

U.S. Route 26 (US-26) is a major cross-state state highway in the U.S. state of Oregon, connecting U.S. Route 101 on the Oregon Coast near Seaside with the Idaho state line east of Nyssa. Local highway names (see Oregon highways and routes) include the Sunset Highway No. 47, Mount Hood Highway No. 26, and John Day Highway No. 5. 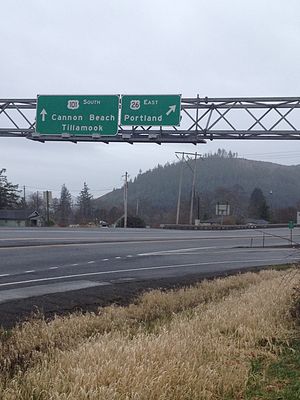 Start of US 26 in Oregon

The western terminus of the highway (and of US 26) is at an interchange with U.S. Route 101 between Seaside and Cannon Beach. The highway heads east from there through the Oregon Coast Range, providing access to Saddle Mountain and passing through the valleys of the Necanicum and Nehalem rivers. It then crosses over the Oregon Coast Range, where it passes through the Dennis L. Edwards Tunnel, descending into the Tualatin Valley, into the community of Banks.[2]

East of Banks, the highway merges with Oregon Route 6 and becomes a freeway, which passes through the high-tech regions of Washington County. The freeway enters the Portland metropolitan area in the northeast corner of Hillsboro, then passes through the northern part of the city of Beaverton and the communities of Cedar Hills and Cedar Mill near the intersection with the northern terminus of Oregon Route 217. Also at this point, MAX Light Rail is adjacent on the north side of the highway for nearly two miles until it submerges into Robertson Tunnel.

The highway enters the Portland city limits near the Sylvan neighborhood, where it is also joined by Oregon Route 8; east of here the highway descends a steep grade through a canyon which penetrates Portland's West Hills; this stretch of the Sunset is coincident with Canyon Road. The highway skirts the southern edge of Portland's Washington Park, providing access to the Oregon Zoo and other attractions. At the bottom of the grade, the highway passes through the Vista Ridge Tunnel into downtown Portland. Immediately east of the tunnel is an interchange with I-405; this interchange is the end of the Sunset Highway.

In Portland, the route overlaps Interstate 405 (Stadium Freeway No. 61) for a short distance before exiting onto city streets, including Arthur Street, to reach the Ross Island Bridge. (Prior to 2005, US 26 ran through downtown Portland on the one-way couplet of Market and Clay Streets, which carry the Sunset Highway to its end at Naito Parkway (Pacific Highway West No. 1W), turning south there to reach the bridge.) US 26 leaves the bridge, which is at the beginning of the Mount Hood Highway No. 26, and follows Powell Boulevard, a surface street, to Gresham.

There were plans to construct a freeway alignment of US 26—the Mount Hood Freeway—to bypass Powell Boulevard; however this project was canceled as a result of the freeway revolts in the 1970s. A few ramp stubs from Interstate 5 (on the Marquam Bridge) stand as evidence of this project. Roadway connections between the Portland freeway network and Mount Hood remain a big problem, as there is no good direct highway connection. The proposed Sunrise Corridor may eventually offer a long-term solution; however construction of this route is several years off.

An expressway begins near Gresham and carries US 26 southeast to near Sandy. From Sandy to near Government Camp and Bennett Pass, where US 26 intersects Oregon Route 35, it closely follows the historic Barlow Road through the Mount Hood Corridor, and is part of the Mount Hood Scenic Byway. The Mount Hood Highway branches off to the north along OR 35, and the Warm Springs Highway No. 53 carried US 26 southeast through Blue Box Pass, the Warm Springs Indian Reservation, and Agency Plains to Madras. After a short overlap with US 97 (The Dalles-California Highway No. 4), the short Madras-Prineville Highway No. 360 continues southeast to a junction with OR 126 in Prineville.

At that junction, US 26 picks up the Ochoco Highway No. 41, which also follows OR 126 west to US 97 in Redmond. The Ochoco Highway ends at OR 19 near Dayville, from which US 26 follows the John Day Highway No. 5 through John Day to US 20 in Vale. The remainder of US 26 in Oregon overlaps US 20 on the Central Oregon Highway No. 7 to the Idaho state line. 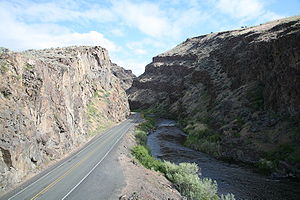 Picture Gorge in eastern Oregon, with US 26 at left and the John Day River at right

An ancient trail passed through the section of the Warm Springs Indian Reservation as part of an extensive Indian trade network linking peoples of the northern Great Basin and Columbia Plateau to those living west of the Cascade Range. Obsidian, bear grass, and slaves were transported over these trails to major trading locations along the Columbia River in exchange for dried salmon, smelt, sturgeon, and decorative sea shells. The long established route was later used by Peter Skene Ogden's fur trapping expeditions in 1825 and 1826. Fur trader Nathaniel Wyeth was here in the 1830s. Captain John C. Frémont followed this route on his 1843 explorations for the United States and Lieutenant Henry Larcom Abbot headed a Pacific Railroad survey party along it in 1855.[3]

The Sunset Highway was originally named the Wolf Creek Highway and was under construction by January 1933.[4] Both the Works Progress Administration[5] and the Civilian Conservation Corps participated in the construction during the Great Depression.[4] Portions of highway officially opened to the public on September 19, 1941. In 1949, the highway was completed. The Sunset name is from the shoulder sleeve insignia and nickname of the 41st Infantry Division, which was largely drawn from Oregon, and for which the highway is dedicated.[6]

Note: US 26 uses many different highways (see Oregon highways and routes); the milepoint column shows mileage along these highways, not adjusted for equations, with the highway number in front.