From Infogalactic: the planetary knowledge core
(Redirected from U.S. Route 400 in Kansas)
Jump to: navigation, search

Its route number is a "violation" of the usual AASHTO numbering scheme, as there is no "parent" highway named "US 100" or "US 0."

US 400 begins in Granada at an intersection with US 385. It then runs concurrently with US 50 through Holly east to the Kansas border. 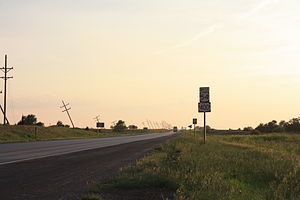 US-400 continues east through several small towns before turning southeast to go through the Fredonia area and intersecting US-75 at Neodesha. After a brief concurrency with US-75, it turns east, intersecting US-59 near Parsons before intersecting US-69 south of Pittsburg. It then turns south with US-69 and at Crestline, follows US-69A south to Riverton. US-400 then turns east with US-166 at Baxter Springs, and the two highways run concurrently eastward into Missouri. 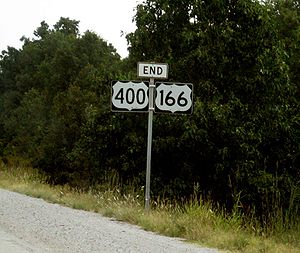