Udupi Rajagopalacharya Ananthamurthy (Kannada: ಉಡುಪಿ ರಾಜಗೋಪಾಲಾಚಾರ್ಯ ಅನಂತಮೂರ್ತಿ; 21 December 1932 – 22 August 2014) was a contemporary writer and critic in the Kannada language born in Thirtahalli Taluk and is considered as one of the pioneers of the Navya movement.[1] He is the sixth writer to be honored with the Jnanpith Award for the Kannada language, the highest literary honour conferred in India.[2][3] In 1998, he received the Padma Bhushan award from the Government of India.[4] He was the vice-chancellor of Mahatma Gandhi University in Kerala during the late 1980s. He was one of the finalists of Man Booker International Prize for the year 2013.[5] He remained a fervent critic of Hinduism and nationalistic political parties until his death from renal failure and cardiac arrest on 22 August 2014.[6]

Ananthamurthy was born in Melige, in Tirthahalli taluk in the Shimoga District. His education started in a traditional Sanskrit school in Doorvasapura and continued in Tirthahalli and Mysore. After receiving a Master of Arts degree from the University of Mysore, U. R. Ananthamurthy taught in the English department at University of Mysore (pictured) for a while before embarking to England for further studies on a Commonwealth Scholarship. He earned his doctorate from the University of Birmingham in 1966 for his dissertation thesis entitled "Politics and Fiction in the 1930s".[7][8]

Ananthamurthy started his career as a professor and instructor in 1970 in English department of University of Mysore. He was the Vice-Chancellor of Mahatma Gandhi University in Kottayam, Kerala from 1987 to 1991.[9] He served as the Chairman of National Book Trust India for the year 1992. In 1993 he was elected as the president of Sahitya Academy. He served as a visiting professor in many renowned Indian and foreign universities including Jawaharlal Nehru University, Eberhard Karls University of Tübingen, University of Iowa, Tufts University and Shivaji University.[1] Ananthamurthy served twice as the chairman of the Film and Television Institute of India.[10] In 2012 he was appointed the first Chancellor of Central University of Karnataka.[10]

Ananthamurthy has participated and delivered lectures in numerous seminars as writer and orator both in and outside the country. He was the member of the committee of Indian writers and visited countries like the Soviet Union, Hungary, France and West Germany in 1990. He visited Moscow in 1989 as board member for a Soviet newspaper. Ananthamurthy was the leader for the committee of writers who visited China in 1993. 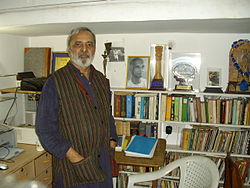 U R Ananthamurthy in his reading room

Ananthamurthy's works have been translated into several Indian and European languages and have been awarded with important literary prizes.[1] His main works include Samskara, Bhava, Bharathi Pura, and Avasthe. He has written numerous short stories as well. Several of his novels and short fictions have been made into movies.

Most of Ananthamurthy's literary works deal with psychological aspects of people in different situations, times and circumstances. His writings supposedly analyse aspects ranging from challenges and changes faced by Brahmin families of Karnataka to bureaucrats dealing with politics influencing their work.

Most of his novels are on reaction of individuals to situations that are unusual and artificial. Results of influences of socio-political and economic changes on traditional Hindu societies of India and clashes due to such influences – between a father and a son, husband and wife, father and daughter and finally, the fine love that flows beneath all such clashes are portrayed by Ananthamurthy in his works. This is evident in his stories like Sooryana Kudure (The Grasshopper), Mowni (Silent Man), Karthika' etc. It does not mean that Ananthamurthy is just clinging to portraying only such somewhat standard subjects of Indian literature of his period. His novelette "Bara" (Drought) portrays the dynamics of a drought-stricken district of Karnataka and the challenges and dilemmas a bureaucrat may face in such situations.

The central figure of the novel Sooryana Kudure – Venkata is shunned by his son and wife for his easy-going attitude that does not take him anywhere. Venkata is a non-achiever who could not achieve any material or monetary success in his life. However, he is a simpleton who does not take life's suffering to his heart too much. He likes to see life as living in the love of Amma (or mother-goddess). In all sufferings of life, he has the child-like curiosity about the smallest things in life – like a grasshopper (Sooryana Kudure). The evening after his son revolts and leaves the house, he would be engrossed in a sight in his yard – a grasshopper shining in the sun's light.

His several novels were made into films like Samskara, Bara, Avaste, Mouni, Diksha.

U. R. Ananthamurthy met his future wife Esther in 1954 and they were married in 1956. They had two children, Sharat and Anuradha. He resided in Bangalore for most of his later life.

U. R. Ananthamurthy made an unsuccessful run for the Lok Sabha in 2004 in which he stated that his prime ideological objective in opting to contest the elections was to fight the Bharatiya Janata Party (BJP).[11]

Ananthamurthy also contested for the Rajya Sabha elections from state assembly in 2006.[13]

The idea proposed by Ananthamurthy to rename ten cities in Karnataka including Bengaluru from their colonial forms to actual native forms was accepted by the Government of Karnataka and the cities were renamed on the occasion of the golden jubilee celebrations of the formation of Karnataka.[14]

In June 2007 Ananthamurthy declared that he would not take part in literary functions in future in the wake of strong criticism for his reaction on S.L. Bhyrappa's controversial novel Aavarana that appeared in a section of the media.[15] However Murthy's comment that Bhyrappa "does not know how to write novels" was criticized by some section of the media.

In 2013, Murthy's statement that there is a reference in the Mahabharata to Brahmins consuming beef drew flak from Hindu religious leaders. Vishwesha Teertha Swami of Pejawar Math commented that there was no reference to Brahmins consuming beef in the conversation between Bhishma and Yudhishtira or anywhere else in the Mahabharata and Murthy's statement came as a surprise to him.[16]

A vocal critic of the Rashtriya Swayamsevak Sangh and Bharatiya Janata Party/Jan Sangh for over 50 years, Murthy said in 2013 that he would not live in the country ruled by BJP leader Narendra Modi.[14] He later clarified that those remarks were made when he was "overcome by emotion" and said that he had no such plan, though he continued to oppose BJP.[17] Murthy was given special police protection after he began receiving threatening phone calls.[18] Later when Modi became the Prime Minister he was given a free ticket to Pakistan by a group of Modi supporters called "NaMo Brigade".[19] After Murthy's death was announced on 22 August 2014, several BJP and Hindu Jagarana Vedike were booked for celebrating his death by bursting crackers at four places in Mangalore and one spot in Chikmangalur.[20] He took leading role in changing city names from Bangalore to Bengaluru and Mysore to Mysuru.

Ananthamurthy died of cardiac arrest on 22 August 2014 at Manipal Hospital, in Bangalore, India, aged 81.[25] He had been suffering from kidney related disease for some years, and was undergoing dialysis treatment with diabetes and heart problem. He was admitted to Manipal Hospital on 13 August with an infection and fever, and underwent treatment on a multi-support system.[26]

Several luminaries including the Prime Minister of India, Narendra Modi, paid their condolences to Ananathamurthy's death.[27][28]