USS Requin (SS/SSR/AGSS/IXSS-481) /ˈreɪkwɪn/, a Tench-class submarine, was the only ship of the United States Navy to be named after the requin, a synonym of shark. Since 1990 it has been a museum ship at The Carnegie Science Center in Pittsburgh, Pennsylvania.

Her keel was laid down on 24 August 1944 by the Portsmouth Navy Yard in Kittery, Maine. She was launched on 1 January 1945 sponsored by Mrs. Slade D. Cutter, and commissioned on 28 April 1945 with Commander Slade D. Cutter in command.

Initially, Requin carried heavier armament than usual for a fleet submarine, perhaps because Commander Cutter was one of the most decorated submarine skippers going to sea. She had an additional five-inch/25-caliber deck gun, as well as two 24-tube five-inch (127 mm) rocket launchers, which were intended to be used to provide offshore bombardment during Operation Downfall, the planned invasion of Kyūshū and Honshū.

Following shakedown off the New England coast, Requin departed Portsmouth, on 3 June 1945 en route to Hawaii. She joined the Pacific Fleet on 13 July at Balboa, Panama, and at the end of the month reached Pearl Harbor. However, two weeks after her arrival, three days before she was to begin her first war patrol, World War II ended and Requin was recalled and ordered back to the Atlantic.

Requin arrived at Staten Island, New York, on 18 September to begin what would be in the words of Commander Cutter, "a dull and boring assignment," essentially becoming a target for sonar school ships. On 6 January 1946 she sailed for Key West, Florida, where she joined Submarine Squadron 4 (SubRon 4). August through November of that year were spent at the Portsmouth Naval Shipyard in Kittery, Maine, being converted to a radar picket submarine. Her four stern torpedo tubes were removed, along with both of her deck guns and her aft anti-aircraft cannon. Two of her forward torpedo tubes were inactivated, and she was reduced to only ten torpedoes. She also received a new skipper; in October 1946, Commander George L. Street III, who earned the Medal of Honor during the war, took command.

After leaving the yard she resumed operations in the western Atlantic and in the fall of 1947 moved north for exercises with her sister radar picket submarine Spinax (SS-489); on 13 November she crossed the Arctic Circle. Given hull classification symbol SSR-481 on 20 January 1948, Requin began modification to the MIGRAINE II Radar Picket configuration at the Portsmouth Naval Shipyard in Kittery, Maine. In December she departed the shipyard after competing trials with new radar equipment and reported to New London, Connecticut for duty with Submarine Squadron 8.

In May 1949 she sailed east for her first deployment with the Sixth Fleet. Arriving at Gibraltar on 14 May, she operated in the Mediterranean Sea until 30 June. Soon after her return to New London, Requin was transferred to Norfolk, Virginia, for duty with SubRon 6. Into the spring of 1950, she operated in the western Atlantic, ranging from Nova Scotia to the West Indies. Overhaul occupied most of the summer, and with the end of the year she prepared for another Sixth Fleet tour. In the Mediterranean from mid-January to mid-May 1951, she resumed operations off the East Coast and in the Caribbean Sea on her return. In August 1952, she was back in European waters. During September, she visited the United Kingdom; then, in October the submarine transited the Strait of Gibraltar for her regular Sixth Fleet duty.

In 1953, she maintained her schedule of Second and Sixth Fleet operations, but at the end of the year put into Philadelphia, Pennsylvania, for an extensive modernization overhaul that among other changes removed her last antiaircraft cannon. On 2 May 1955, she sailed for her fifth Mediterranean deployment. Detached at the end of July, she returned to Norfolk and remained on the East Coast, with cruises to the Caribbean, until November 1957 when she resumed duty with the Sixth Fleet.

From June through August 1959 the Charleston Navy Yard in South Carolina removed all Requin’s radar equipment and improved her streamlining. Upon her conversion to Fleet Snorkel configuration, she was given hull classification symbol SS-481 on 15 August 1959, and rejoined SubRon 6 in Norfolk for operations as a normal attack submarine, a role she retained until her decommissioning.

Requin conducted local operations off the East Coast and in the Caribbean Sea. In the summer of 1961 "Requin" served as a target for Task Group Alpha led by USS Saratoga CVA 60. "Requin" conducted a periscope approach on Saratoga and launched a simulated torpedo attack. Then a helicopter dropped an exercise torpedo on "Requin" which hit forward and made several re-attacks bouncing down the port side of the submarine. On 20 September 1963, Requin completed her 5000th dive. From 7 January 1964 into May she operated with the Sixth Fleet, then resumed her Second Fleet duties into 1968, interrupted only twice for extended deployments. Operation UNITAS VII in the fall of 1966 called for Requin to cruise around the South American continent for exercises with various South American navies and her last Sixth Fleet deployment sent her back to the Mediterranean for duty from 4 April to 27 July 1967.

Requin’s last Mediterranean deployment began on 4 April 1967. On 8 June, just as she completed a series of exercises with the U.S. Sixth Fleet, she received word that the U.S. signals intelligence ship Liberty (AGTR-5) was under attack. Requin’s crew prepared to go to the defense of Liberty, but received orders from the Sixth Fleet commander to surface and proceed to Crete.

On 28 May 1968, during her last deployment before decommissioning, Requin departed Norfolk, Virginia, as part of the search effort for the missing nuclear attack submarine Scorpion (SSN-589). On 29 June 1968, Requin was reclassified AGSS-481 and in October 1968 she began inactivation at Naval Station Norfolk. Decommissioned on 3 December 1968, she was towed to St. Petersburg, Florida in February 1969 and served there as a non-powered Naval Reserve training vessel for Naval Reserve Center St. Petersburg, adjacent to Albert Whitted Airport and Coast Guard Air Station St. Petersburg. On 30 June 1971 Requin was reclassified as IXSS-481, and on 20 December 1971 she was struck from the Naval Vessel Register. 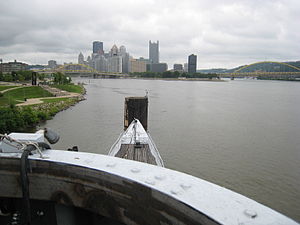 View of Pittsburgh from the sail of the USS Requin

On 17 June 1972 Requin was transferred to a non-profit memorial foundation in Tampa, Florida, and docked in the Hillsborough River adjacent to Curtis Hixon Hall and the Tampa Museum of Art, across the river from the University of Tampa, as a tourist attraction. She remained in this role until 1986, when the non-profit organization responsible for the submarine folded due to insolvency and Requin was closed down due to lack of funding and support. With the exception of briefly reopening in 1988, she essentially remained abandoned at the pier for the subsequent four years.[7]

On 21 February 1990 Senator John Heinz introduced Senate Bill S.2151, which allowed Requin to be transferred as an exhibit for the Carnegie Science Center in Pittsburgh, Pennsylvania. On 24 May Requin was towed to Tampa Shipyard for dry docking and hull repairs, in preparation for her move to Pittsburgh. On 7 August she left International Ship Repair in Tampa under tow to Baton Rouge, Louisiana where, on 11 August, she was lifted onto barges and began her ride up the Mississippi River and Ohio River to Pittsburgh. On 4 September Requin arrived at the Carnegie Science Center, and on 20 October Requin was dedicated as a memorial and museum exhibit, and opened for tours.

This article incorporates text from the public domain Dictionary of American Naval Fighting Ships. The entries can be found here and here.