From Infogalactic: the planetary knowledge core
(Redirected from US Army Africa)
Jump to: navigation, search

SETAF, now known as USARAF/SETAF has been stationed in Italy since 1955 and has a long history of operating on the African continent and partnering with African nations. During the past 15 years, SETAF has provided crisis response, disaster relief and humanitarian assistance on the continent.

On December 3, 2008 in Rome, Italy, an official announcement by the U.S. and Italian governments stated that SETAF would become USARAF, and one week later on December 9, 2008 USARAF was established as the Army Service Component Command of AFRICOM. According to the Army Times, this marked the end of the airborne chapter of the unit’s history and the beginning of its new role as the Army component of AFRICOM.

The vision for U.S. Army Africa is to be a trusted and respected partner, achieving long-term strategic effects in Africa. The command's mission statement explains that USARAF/SETAF employs Army forces as partners, builds sustainable capacity, and supports the joint force in order to disrupt transnational threats and promote regional stability in Africa. 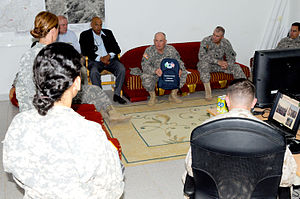 As the current USARAF commander, MG Darryl A. Williams, will ensure that U.S. Army capabilities are available and prepared to protect U.S. interests, support the achievement of AFRICOM goals, and enable our African partners to provide a secure environment. To achieve this, USARAF will ensure a deployable operational headquarters is validated and available to deploy; support military operations to contain and neutralize transnational threats; engage with African nations and regional organizations to build sustainable capability and capacity of African Land forces; shape the AFRICOM AOR with Army forces, theater posture, and developing the landpower network in Africa; and command, sustain and employ Army, Joint and Coalition forces as directed, including ADCON and Lead Service requirements..

Ultimately, when these items mentioned are met, American interests are protected and African land forces are able to address African security challenges.

Means by which the DoD encourages and enables countries and organizations to work with the U.S. to achieve strategic objectives.

Consists of official, cooperative and generally non-combat interactions between Army elements, active duty, or U.S. National Guard and Reserve components. This includes U.S. government or non-government entities that support the Army and governments, industries, institutions, or people of other nations or official or non-governmental international organizations.

Department of State managed program that trains 20-30 battalions of peacekeepers throughout Africa annually. ACOTA trains and equips contingents from selected African militaries with enhanced capacity to respond quickly and effectively to peace support and humanitarian relief situations on the continent. ACOTA is a part of Global Peace Operations Initiative (GPOI).

ADAPT is a Theater Logistics Engagement activity that helps build deployment capacity for African partners who conduct peacekeeping, counter-terrorism, or humanitarian relief operations in Africa. Funded by the Department of State, the ADAPT program aims to enhance the projection capabilities of African militaries to support these mission requirements.

Provides assistance to enhance the capabilities of a foreign country’s national military forces.

Designed to build relationships and satisfy the Army’s Title 10 responsibilities. This is typically a five-day event where the team participates with partner nation’s military on different types of non-training related events.

Military to Military event that occurs in which an African partner sends a group of military related personnel to American military activities with the purpose being to expose and familiarize the partner nation on some aspect of the U.S. Army.

Bi-lateral and multi-lateral exercises where U.S. forces train with and alongside partner nations. Scenarios and environments vary.

These are designed to train U.S. medical elements and specialists as well as host nation personnel. This increases interoperability and enhances relationships.

Reform or rebuild a state’s security sector. Focuses on where a dysfunctional security sector is unable to provide security to the state and its people effectively and under democratic principles.

Engagement opportunity that brings together land forces chiefs of staff from African nations and military leadership from the U.S. Army to discuss African security challenges.

The unified action to generate, employ, and sustain local, host-nation or regional security forces in support of a legitimate authority.

This is a National Guard Bureau program. This program provides unique partnership capacity building capabilities to combatant commanders through partnerships between U.S. states and partner nations.

This is a U.S. Army Cadet Command program. This program utilizes immersion training within a deployment to a partner nation.

In the fall of 2008, SETAF went through major organizational changes as it restructured to support AFRICOM. It was August 2008 when SETAF conducted its final airborne operation and, shortly thereafter, SETAF soldiers replaced their maroon berets with black berets and replaced their airborne tabs with historic SETAF scrolls.

In early December 2008, the U.S. Ambassador to Italy and the Italian Minister of Foreign Affairs announced in Rome that SETAF officially had assumed duties as the U.S. Army Africa, the Army component headquarters for AFRICOM.

As of March 2013, during the last 30 months, U.S. Army Africa conducted more than 400 theater security cooperation activities, exercises, and Senior Leader Engagements with each event designed to build partner capacity in Africa.

On July 25, 2003, SETAF was designated to lead the U.S. military mission in Liberia to help prevent an impending humanitarian disaster. A peace agreement was implemented, forces of the warring factions were separated, air and seaports were reopened, and the UN and private humanitarian organizations resumed delivery of badly needed relief.

In February 2005, SETAF was called upon to do their part in the Global War on Terror, deploying to Afghanistan, as part of the Combined Joint Task Force 76.

From June through November 2007, SETAF soldiers deployed to Romania and Bulgaria as a part of Joint Task Force East (now called Task Force-East). TF-East remains an ongoing United States European Command initiative to strengthen relationships between the United States and its allies in Eastern Europe.

In July 1994, SETAF deployed to Entebbe, Uganda as the core staff of Joint Task Force Support Hope. A total of 2,100 U.S. military personnel, including SETAF's 3rd Battalion (Airborne), 325th Infantry Regiment, deployed to the region to help prevent a humanitarian crisis resulting from large-scale refugee movements caused by the civil war in Rwanda.

SETAF demonstrated its role as the theater's reaction force in December 1995 by deploying as the lead element of the Dayton Peace Accord implementation forces into Bosnia-Herzegovina.

April 1996 proved to be exceptionally busy: Elements of the SETAF Infantry Brigade deployed to Dubrovnik, Croatia to secure the airplane crash site of a plane carrying then U. S. Commerce Secretary Ron Brown.

Another deployment brought SETAF Soldiers to Monrovia, Liberia with Special Operations Forces to facilitate noncombatant evacuation operations. In November 1996, portions of the SETAF-led Joint Task Force Operation Guardian Assistance deployed to Uganda and Rwanda to assess the needs of Rwandan refugees in Zaire.

In March 1997, a SETAF-led Joint Task Force (JTF) headquarters deployed to Brazzaville, Congo, in preparation for the potential evacuation of non-combatants from Zaire. The JTF redeployed in April 1997 upon a peaceful government transition in Zaire.

SETAF was formally activated during a ceremony on October 25, 1955.

The headquarters, commanded by Maj. Gen. John H. Michaelis, was temporarily established at Camp Darby, near Livorno, Italy with units additionally stationed in Vicenza and Verona. Shortly after activation, SETAF moved the headquarters to Caserma Passalacqua in Verona, Italy. The troop strength reached 10,000 and SETAF was formally established with a U.S./Italian agreement.

In 1959, a third agreement brought significant changes to SETAF, to include assigning Italian Army personnel to the SETAF general staff to assist with unique bi-national responsibilities. In 1963, SETAF lent a helping hand to its Italian neighbors when a huge landslide forced a deluge of water over the Vajont Dam in the Piave Valley killing more than 2,000 people. SETAF helicopters were the first on the scene to provide assistance.

The headquarters moved again in 1965 to Caserma Carlo Ederle in Vicenza.

SETAF's mission and geographical area of responsibility increased in 1972 when the command enlarged its signal support unit and began controlling two Army artillery groups in Greece and Turkey.

With the assignment of the 1st Battalion, 509th Infantry (Airborne Battalion Combat Team) in 1973,l Which was later reflagged in 1984 as 4/325 ABCT Then in 1987, the battalion rotated assignments with 3/325 based in Ft Bragg N.C. The battalion was again reflagged as 1/508 ABCT in 1996 as the 3/325 rejoined the 325th Infantry Regiment at Ft Bragg. SETAF accepted the missions of maintaining and deploying the battalion on its own or as part of the Allied Command Europe Mobile Force (Land). Throughout the 1970s and 80s, SETAF continued its tradition of helping their Italian neighbors whenever disaster struck.

Until 1992, SETAF was considered to be a logistical command, but changes in Europe resulting from the end of the Cold War also resulted in new missions for the unit. SETAF shifted focus to regional tactical operations as command and control headquarters for Army and joint units.