The United States Open Tennis Championships is a hard court tennis tournament. The tournament is the modern version of one of the oldest tennis championships in the world, the U.S. National Championship, for which men's singles was first contested in 1881. Since 1987, the US Open has been chronologically the fourth and final tennis major comprising the Grand Slam each year; the other three, in chronological order, are the Australian Open, the French Open and Wimbledon.

The US Open is held annually, starting on the last Monday in August, and lasting for two weeks into September, with the middle weekend coinciding with the Labor Day holiday. The main tournament consists of five event championships: men's and women's singles, men's and women's doubles, and mixed doubles, with additional tournaments for senior, junior, and wheelchair players. Since 1978, the tournament has been played on acrylic hard courts at the USTA Billie Jean King National Tennis Center in Flushing Meadows–Corona Park, Queens, New York City. The US Open is owned and organized by the United States Tennis Association (USTA), a not-for-profit organization, and the current Chairperson of the US Open is Katrina Adams. Net proceeds from ticket sales, sponsorships, and television deals are used to promote the development of tennis in the United States.

The US Open is the only Grand Slam that employs tiebreakers in every set of a match. For the other three Grand Slam events, if a match goes to the last possible set (the third for women, fifth for men) and there is a 6–6 tie, the match continues until one player wins by two games, but the sets played before the last set always employ tiebreakers should a set reach 6–6. 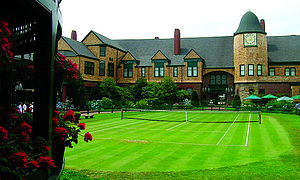 The tournament was first held in August 1881 on the grass courts at the Newport Casino, Newport, Rhode Island and in that first year only clubs that were members of the United States National Lawn Tennis Association (USNLTA) were permitted to enter.[2] The first edition was won by Richard Sears, who went on to win seven consecutive singles titles.[3] From 1884 through 1911, the tournament used a challenge system whereby the defending champion automatically qualified for the next year's final in which he would play the winner of the all-comers tournament. In 1915 the national championship was relocated from Newport, Rhode Island to the West Side Tennis Club at Forest Hills, New York; as early as 1911 an effort was made by a group of tennis players, headed by New Yorker Karl Behr, to relocate the tournament to New York City.[4]

In the first years of the U.S. National Championship only men competed and the tournament was known as the US National Singles Championships for Men. Six years after the men's nationals were first held, the first U.S. Women's National Singles Championship was held at the Philadelphia Cricket Club in 1887, won by 17-year-old Philadelphian Ellen Hansell. This was followed by the introduction of the U.S. Women's National Doubles Championship in 1899 and the U.S. Mixed Doubles Championship in 1892. The women's tournament used a challenge system from 1888 through 1918, except in 1917. Between 1890 and 1906 sectional tournaments were held in the east and the west of the country to determine the best two doubles teams, which competed in a play-off for the right to compete against the defending champions in the challenge round.[5]

In early 1915 the issue resurfaced when a group of about 100 tennis players signed a petition in favor of the move, arguing that most tennis clubs, players and fans were located in the New York City area and that it would therefore be beneficial for the development of the sport to host the national championship there.[6] This view was opposed by another group of players which included eight former national singles champions.[7][8] The contentious issue was brought to a vote at the annual USNLTA meeting on February 5, 1915 and with 128 votes in favor and 119 against it was decided to relocate.[9][10][11]

From 1921 through 1923, the tournament was played at the Germantown Cricket Club in Philadelphia.[12] It returned to Forest Hills in 1924 following the completion of the newly constructed 14,000 seat concrete Forest Hills Stadium.[5] Though regarded unofficially by many as a major championship beforehand, the tournament was officially designated as one of the major tournaments by the ILTF commencing in 1924.

At the 1922 U.S. National Championships the draw for the first time included seeded players in order to avoid leading players drawing against each other in the early rounds.[13][14][15]

The open era began in 1968 when all five events were merged into the US Open, held at the West Side Tennis Club in Forest Hills. The 1968 combined tournament was open to professionals for the first time. That year, 96 men and 63 women entered the event, and prize money totaled $100,000. In 1970, the US Open became the first Grand Slam tournament to use a tiebreak to decide a set that reached a 6–6 score in games and is the only major to use a tiebreak in the deciding set; the other three grand slams play out the deciding set until a two-game margin is achieved. From 1970 to 1974 the US Open used a best-of-nine point, sudden death tiebreaker before moving to the ITF best-of-twelve point system.[3] In 1973 the US Open became the first Grand Slam tournament to award equal prize money to men and women with that year's singles champions John Newcombe and Margaret Court both receiving $25,000.[3] Another US Open innovation came in 1975 when floodlights enabled night play for the first time.

In 1978 the tournament moved from the West Side Tennis Club, Forest Hills, Queens to the larger USTA National Tennis Center in Flushing Meadows, Queens, three miles to the north. In the process, the tournament switched the court surface from clay, used in the last three years at Forest Hills, to hard courts. Jimmy Connors is the only individual to have won US Open singles titles on all three surfaces (grass, clay, hardcourt), while Chris Evert is the only woman to win on two surfaces (clay, hardcourt).[3] The US Open is the only Grand Slam tournament that has been played every year since its inception.[16] During the 2006 US Open, the complex was renamed the USTA Billie Jean King National Tennis Center in honor of four-time tournament champion and women's tennis pioneer Billie Jean King.[17]

From 1984 through 2015, the U.S. Open deviated from traditional scheduling practices for tennis tournaments with a concept that came to be known as "Super Saturday": the men's and women's finals were played on the final Saturday and Sunday of the tournament respectively, and their respective semi-finals were held one day prior. The Women's final was originally held in between the two men's semi-final matches; in 2001, the Women's final was moved to the evening so it could be played on primetime television, citing a major growth in popularity for women's tennis among viewers.[18] This scheduling pattern helped to encourage television viewership, but proved divisive among players because it only gave them less than a day's rest between their semi-finals and championship match.[19][20]

For five consecutive tournaments between 2007 through 2012, the Men's final was postponed to Monday due to weather. In 2013 and 2014, the USTA intentionally scheduled the Men's final on a Monday—a move praised for allowing the Men's players an extra day's rest following the semis, but drew the ire of the ATP for further deviating from the structure of the other Grand Slams.[21][19] In 2015, the Super Saturday concept was dropped, and the US Open returned to a format similar to the other majors, with Men's and Women's finals on Saturday and Sunday. However, weather delays forced both sets of semifinals to be held on Friday that year.[22][20] 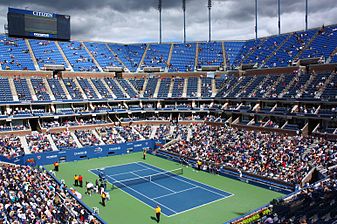 The grounds of the US Open hold a total of 22 courts consisting of four "show courts" (Arthur Ashe, Louis Armstrong, Grandstand and Court 17), 13 field courts and five practice courts.

The main court is the 22,547-seat Arthur Ashe Stadium which opened in 1997. It is named after Arthur Ashe, the African-American tennis player who won the men's final of the inaugural US Open in 1968. The next largest court is the Louis Armstrong Stadium, opened in 1978, extensively renovated from the Singer Bowl, which was built for the 1964 New York World's Fair. It was the main stadium from 1978 to 1996. Its peak capacity neared 18,000 seats, but was reduced to 10,200 by the removal of the upper tiers of seating after the opening of Arthur Ashe Stadium.[23] The third largest court is the 6,000-seat Grandstand, created when the rectangular Singer Bowl was transformed into the square Armstrong Stadium, leaving about a third of the Bowl available to become another venue.

In 2011, Court 17 was opened as a fourth show court, with large television screens and electronic line calling which allows player challenges. Sunken into the ground, it has been nicknamed "The Pit". It holds 3,000 fans since its full completion in 2012. It is located in the southeast corner of the grounds.[24] Sidecourts 4, 7, and 11 each have a seating capacity of over 1,000.

All the courts used by the US Open are illuminated, allowing television coverage of the tournament to extend into primetime. In 2001, the Women's final was moved to primetime; CBS Sports president Sean McManus cited significant interest credited to star players Serena Williams and Venus Williams, and the ratings performance of the 1999 Women's final, which was pushed into primetime due to a rain delay.[18]

Since 1978 the US Open has been played on a hard court surface called Pro DecoTurf. It is a multi-layer cushioned surface and classified by the ITF as medium-fast (category 4), having slightly less friction and producing a lower bounce compared to other hard courts.[25][26] Each year, before the start of the tournament, the courts are resurfaced.[27]

In 2005, all US Open and US Open Series tennis courts were given blue courts inside the lines to make it easier to see the ball on television (as well as for fans in the stands).[28] The outer portion remains green.[29]

In 2006, the US Open introduced instant replay reviews of calls, using the Hawk-Eye computer system, the first grand-slam event to use the system. According to many experts, the system was implemented due to a controversial quarterfinal match at the 2004 US Open between Serena Williams and Jennifer Capriati, where important line calls went against Williams.[30] Instant replay was initially available only on the stadium courts (Ashe and Armstrong), until 2009 when it became available on the Grandstand as well. In 2007, JP Morgan Chase renewed its sponsorship of the US Open and as part of the arrangement, the replay system was renamed to "Chase Review" on in-stadium video and television.[31]

Ranking points for the men (ATP) and women (WTA) have varied at the US Open through the years but presently singles players receive the following points: