UTC+14:00 is an identifier for a +14 hour time offset from UTC. This is the highest time zone, meaning that areas in this zone are the first to see a new day, and therefore the first to celebrate a New Year.

UTC+14 stretches as far as 30° east of the 180° longitude line and creates a large fold in the International Date Line. 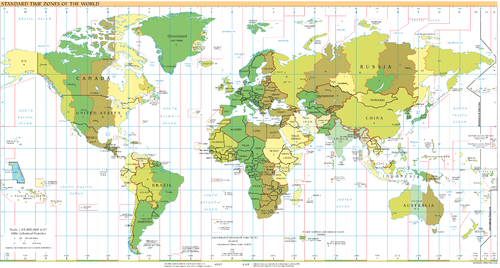 The central Pacific Republic of Kiribati introduced a change of date for its eastern half on 1 January 1995, from time zones −11 and −10 to +13 and +14. Before this, the time zone UTC+14 did not exist. As a British colony, Kiribati was centered in the Gilbert Islands, just west of the old date line. The distant Phoenix and Line Islands were on the other side of the date line. Government offices on opposite sides of the line could only communicate by radio or telephone on the four days of the week when both sides experienced weekdays simultaneously.

The revision of Kiribati's time zone meant that the date line in effect moved eastwards to go around this country, so that the Line Islands, including the inhabited Kiritimati island, started the year 2000 on its territory before any other country on earth, a feature which the Kiribati government capitalized upon as a potential tourist draw.[1]