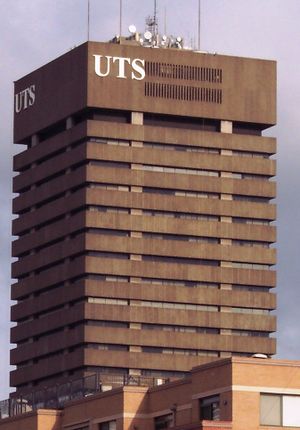 The UTS Tower is one of many buildings that constitute the University of Technology, Sydney, in Sydney, Australia.

It is located south of the city's central business district, near to Central Railway station and opposite One Central Park at 15 Broadway, Sydney, New South Wales, Australia. 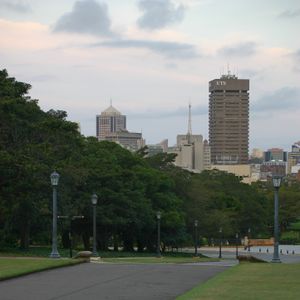 The building as seen from the University of Sydney 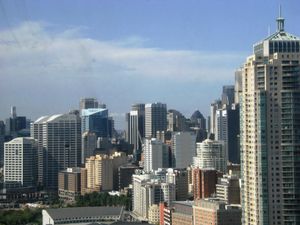 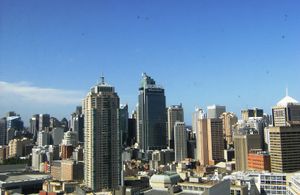 The East facing view from level 23 of the tower building
File:Sydney skyline from UTS Tower.jpg
View of the Sydney central business district from the tower

The original 1964 plan provided for a row of seven twelve-storey buildings on the site. This was gradually modified. In 1965 it was to be four buildings of fifteen, twenty, nineteen and fourteen storeys. And by 1966, three buildings were planned of thirteen, twenty-two and sixteen storeys with two basements and five podium levels. The plan was to create an 'indoor campus' with all facilities being self-contained. An alternative interpretation of the Tower's rationale was provided by "Shoplift", a Student Association magazine. It alleged that the architects had been instructed to develop a building "in which students would not want to congregate". This was in the wake of the 1968 student riots in Paris and elsewhere when fear of student agitation was prevalent. By the mid-1970s, with cutbacks in Commonwealth funding, the grand plan was reduced to two buildings, the second to be not proceeded with.[clarification needed] In the euphoria of the late sixties and early seventies, however, with money readily available and the Brickfield Hill campus bursting at the seams, NSWIT - which became UTS in 1988 and the largest of the institutions which ultimately amalgamated as the new UTS in 1990 - was keen to acquire new buildings.

Construction commenced in 1969 only two weeks after the State Government announced the signing of the contract. The site quickly became a huge hole in the ground, 300 feet square and 50 feet deep and a great attraction to passers-by. Due to inclement weather, it quickly filled with water.

Some journalists from the nearby Fairfax Building rowed across the flooded excavation site in an idle moment. The continual rain not only delayed work but also posed construction problems particularly with the hydraulic shaft wells. In one attempt to clear them, a deep-sea diver was employed to drill holes allowing the water to move into the sub-strata. This procedure was successful – until it rained again.

As it was being built at the same time as the Sydney Opera House, the Tower became known as "The Broadway Opera House rising," as the Sun newspaper quipped, in costs but in no other way. This was a reference to industrial action by the Builders' Labourers Federation (BLF) particularly over a dispute between its federal and state branch members. On one occasion eight BLF members locked themselves inside two high cranes and refused to come down. A single BLF dispute in 1970 lasted five weeks. The Tower was supposed to grow by a level every three weeks but at one point a level took eighteen months to complete.

Finally, in 1975, administration moved into the first few floors also using the podium area while the rest of the Tower was being completed. In 1979, after approximately eight years in construction and at a final cost of $32 million – almost double the original estimate of cost and time – the ‘tallest educational facility in Australia with [27 floors and] thirty-two levels rising 120 metres above the pavement’ was officially opened.

Once the first tower was almost complete, the Institute turned its attention to the second. The Commonwealth Government was not forthcoming financially so Building 2 was built to ground level and until NSWIT had signed a contract for completion, covered with a plastic sheet. The building opened in March 1980 with eleven floors instead of the planned twenty-two and with a wider base. But works continued until 1984.

The Tower has been described very colourfully and identified numerous times as Sydney's ugliest building, notably in The Sydney Morning Herald,[1][2] by world-renowned architect Frank Gehry.[3] Architecture critic and author Elizabeth Farrelly called it "conspicuous, defiant, detested".[citation needed], Journalist and author Mike Carlton described it as "a menacing concrete monolith in an architectural genre that the old East German Stasi brought to perfection".[4]

The Tower's visibility in the central business district skyline has also been described positively, as marking Sydney as a University town.[2] Then President of NSWIT Werner considered that the central city site had 'paid off' as it allowed easy access to the Tower buildings because the transport system was good, however the notoriously slow speed at which the building lifts operated before their renovation almost negated this.[citation needed] Professor David Goodman has noted its transformation "from eyesore to icon. Its perceived starkness may be part of a proud image of being down to earth."[citation needed] Former Vice-Chancellor Gus Guthrie commented, "We have a tower, but no one could claim it was an ivory one."[citation needed]

A beautification scheme, suggested by the architecture company Laboratory for Visionary Architecture, involved covering the building with a lightweight composite mesh textile, which would be able to store rainwater, generate electricity and cool down the building, thus transforming it into a self-sufficient body.[5]