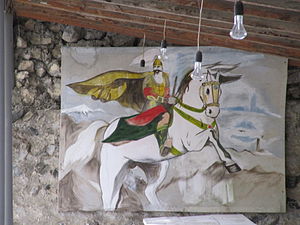 Allegedly conflated with a pagan deity of Scythian religion, Uastyrdzhi is frequently depicted as a cavalryman with a long beard, riding on a white horse.[1] One of his cultic centers is a place called Hetag's Grove, a wood situated three kilometres outside of Alagir, near Suadag village.

According to legend, St. Hetag (also Khetag; Хетаг), the son of a Kabardian Muslim prince, converted to Christianity and had to flee from those who wanted to force him to turn back to Islam. As his pursuers were about to catch up with him, he prayed for help in an open field, and the forest descended from the mountain slopes to conceal him. Upon seeing this miracle, Hetag's enemies fled, and Hetag consecrated the grove to Uastyrdzhi. The grove is made up of ash and beech trees and covers just under 13 hectares. Holy trees are decorated with ribbons and pictures of Saint George and the dragon. A large wooden temple has been built nearby. Since the fall of the Soviet Union, the cult of Uastyrdzhi - and St. Hetag's Grove in particular - has enjoyed renewed popularity in Ossetia, and there have been several claims of visitations. The attitude of the local Russian Orthodox Church towards Uastyrdzhi is ambivalent.[2]

In November each year, the week-long festival of Djiorgwyba (Джиоргуыба) is celebrated in Uastyrdzhi's honour (and, indeed, gives the name to the month in Ossetian).[3] A one-year-old bullock is sacrificed. To indicate that the victim belongs to the god, its right horn is cut off long before, forbidding any herdsman to swear on it.[4]

Uastyrdzhi is the patron of the male sex and travellers as well as being a guarantor of oaths. Because of his association with fertility, it is forbidden for women to pronounce his name. Instead they must refer to him as лӕгты дзуар (literally, "the saint of men").[5][6]

Uastyrdzhi is invoked in the national anthem of North Ossetia.

Hetag's Day is on the first Sunday in July.